The stand-out school of 1970 was newcomer South Grafton HS who revelled on their home course, taking either first or second place (or both) in five of the six events to win the pointscore on 100 points ahead of the other local school Grafton HS on 63. The only event in which South Grafton did not feature was the Champion Eight won by Sydney Boys HS. Sydney had chosen not to travel with their full squad, entering single crews in the Eight and First Four only, though the four had not progressed past the heats. Over the years, Sydney Boys HS would be selective with their entries, balancing their commitment to the GPS with competition at the CHS level. In many years, only their junior crews would be entered (as had happened in 1965) while in other years, only seniors would be entered to secure the elite Eight and First Four events. This system has worked well for them in the Eight, with Sydney Boys HS securing 37 of the 44 races contested.

The structure of CHS rowing competition remained set for three years with no change in events or the pointscore although the venue of the regatta did vary. The championship regatta went to Lake Burley Griffin in the ACT for 1971, the only time the regatta was run outside the state of NSW. Penrith HS in their second year of competition won First, Second and Third Fours, topping the pointscore to be Champion School.

The 1972 regatta was conducted on the NSW Rowing Association championship course on the Nepean River at Penrith, considered to be one of the best natural rowing courses in the world. This began a fifteen year sequence of two regattas in the city followed by one in the country which reflected the relative number of city and country schools rowing at that time. Up until 1994, the city venue was to be the Nepean River although floods did upset the pattern in 1975. Sydney Boys HS won three of the six events to be Champion School of 1972 although Homebush Boys HS did take out the first of their two successive First Four wins.

1973 saw the introduction of two new events, a Fourth Four and the competition’s first sculling event, an Invitation Single Scull that became a championship event in 1975. In either 1973 or 1974, the remaining Tub Pair event was removed from the program. 1973 was the second year of competition on the Nepean River with the 1974 regatta being rowed on the Manning River at Taree, a course that the championships would return to many times. In both of these years, even though they won only one event at each regatta, Penrith HS took the title of Champion School due to their depth of rowing across all events. 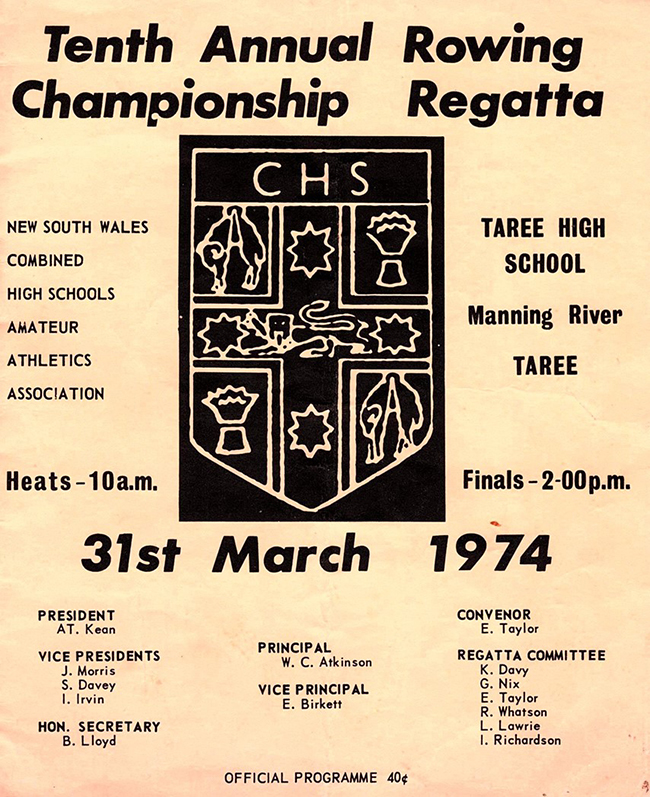 A significant innovation for the 1975 regatta was the inclusion of an Invitation Girls Four event won by Taree HS. This was the beginning of a rapid and successful growth in schoolgirl rowing that led to the addition of another six girls events over the next seven years, all conducted over 1000m. Until the amalgamation of the boys and girls associations in 1981, pennants, and later medals, for members of winning crews were supplied separately by the CHSSA and the GSSSA.

In keeping with the sequence of two regattas in the city followed by one in the country, the 1975 championships were due to be conducted on the Nepean River, however flooding at Penrith caused the regatta to be transferred to Iron Cove. The Champion Eight was won by Telopea Park, the last win by an ACT school, providing a brief interruption to the continuous success of Sydney Boys HS in that event. Chatham HS from Taree became the tenth different school in eleven years to win the First Four while Sydney Boys HS reclaimed the title of Champion School. 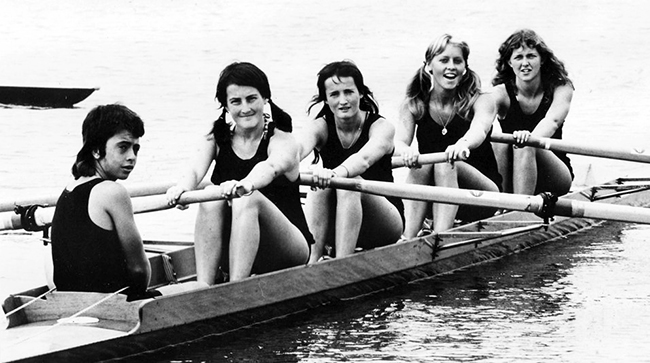 A Girls Lightweight Four and an Invitation Boys Coxed Pair were added for the 1976 championships on the Nepean River at which Sydney Boys HS dominated. Sydney won five of the seven boys pointscore events to convincingly win the title of Champion School. Their dominance was only broken by Taree HS in the Lightweight Four and Springwood HS’s Steve Foster in the Champion Single Scull. Steve was also a member of the winning Springwood Pair. 1976 was the last year of participation for ACT schools following the transfer of control of territory schools to the ACT Department of Education.

The regatta returned to the Manning River in 1977 with a Girls Second Four added to the program and the Boys Coxed Pair becoming a championship event. Host school Taree HS won four of the eight boys events although they were outscored by Sydney Boys HS for the title of Champion School. 1977 saw the introduction of a pointscore for Champion Girls School with Grafton HS winning the trophy.

Following the pattern set for CHS regattas, the championships were conducted on the Nepean River in both 1978 and 1979 with a Girls Third Four added in 1978 and an unaltered program run in 1979. The Boys and Girls Pointscore winners remained unchanged for 1978 but 1979 saw two new claimants with Taree HS winning the Boys Pointscore to be Champion School and Nepean HS on top in the Girls Pointscore. Up until that time, the strength in rowing competition had been with the schools running single sex programs. This pattern was broken in 1978 when Taree HS and Nepean HS demonstrated strength in diversity to become the first schools to win both boys and girls events at the same championship regatta.

At the 1978 regatta, the early pacesetters in girls competition, Malvina HS and Riverside Girls HS, each won their third successive CHS event. However, Riverside Girls HS was not to re-appear on the winners list until 1994 while Malvina HS would have one last success in 1980 before dropping out of rowing completely two years later, leaving the way open for co-educational programs to dominate the next phase of schoolgirl rowing.

In winning the Boys Champion Single Scull at the 1978 regatta, Dave Foster completed a triple for Springwood HS started by his brother Steve in 1976, while Taree HS’s win in that event in 1979 began a triple for Murray Doust that would lead to his representation for Australia at the World Junior Championships.