There was mixed success in 1990-91, with TRC winning five State Championships and three National Championships. The major success being our lightweight men who won the Penrith Cup at West Lakes after a drought of 21 years. In the winning crew was Gavin Russell, nephew of Bob Russell the coach of SA's first win of the Penrith Cup in 1970.

In 1991-92 the tragedy of Jack Bollen's death hit the Australian rowing community. For many TRC members, Jack Bollen was both a mentor and father figure. He left his mark on all who passed through the TRC doors.

TRC was reasonably successful this season with our female members showing the way. Once again TRC won the Women's Premiership along with ran State Championships, two National Championships and three Victorian Championships.

A great honour was bestowed upon one of our long serving stalwarts Bryan Draper who was awarded an Order of Australia Medal for services to rowing in the Queens Birthday Honours List.

1993-94 saw the continuing success of two of our members, Amy Safe and Sally Newmarch who between them achieved three State Championships and three National Championships.

A contingent from the TOMS went to Hong Kong to compete in a FISA Masters regatta and a great time was had by all.

In 1994-95 once again TRC had some members performing very well, our lightweight men winning a State Championship Pair and racing well at the National Championships. David Belcher and Sally Newmarch were selected in Australian teams with Amy Safe getting her second Gold Medal at the Junior World Championships with a win in the Single Scull at Munich. 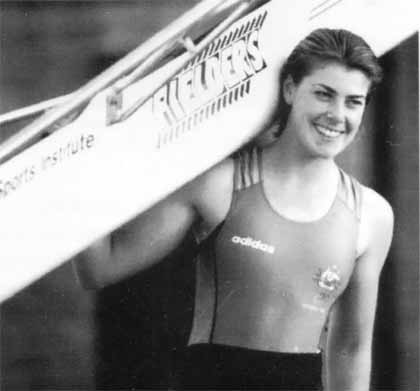 1996-97 saw the realisation of a great asset to the Club with the completion of the West Lakes building extension project, which under the guidance of Luigi Lippis, and a generous donation from the TOMS, saw the Club gain permanent access to half a bay, giving TRC a place to store boats and train at West Lakes.

On the rowing scene the Club had a fantastic run of success with twenty-seven State Championships, the Women's Premiership, five National Championships and three members being selected in Australian crews.

In 1997-98 the Club won a total of twenty five State Championships, including both Senior Men's and Women's Eights. We retained the Women's premiership, had members winning three National Championships and had nine Australian representatives.

The prestigious FISA Masters Championship was held at West Lakes in 1997 with Rob Curkpatrick as the CEO of this highly successful event. TRC members won gold medals in four events.

All in all, the Club was in good shape, with a good fleet of boats and oars and plans to upgrade our clubrooms.

1998-99 was another successful year for our Club as once again we established ourselves as a leading club in SA and Australia with excellent on water results and a dynamic involvement in the sport. Success on the water saw fifteen State Titles, two National Titles and seven athletes gaining National selection, including Mark Sparnon (Bronze), Megan Tuckey, Belinda Rowe, Vanessa Kelly and Kaye Anstey in the Junior World Championships in Poland, Kisahn Lamshed (Gold medal) in the Nation's Cup and Sally Newmarch (Bronze medal) and Josephine Lips in the Senior World Championships in Germany.

The members elected Dianne De Bellis as the first woman as Captain. Dianne joined TRC after participating in a WEA "Learn To Row" course and was part of the D Grade mixed crew that won a Gold Medal at the FISA Masters regatta in 1997.

In 1999 Mark Sparnon, was selected for the Nations Cup, and Kisahn Lamshed and Sally Newmarch were selected to represent Australia in the Senior team. 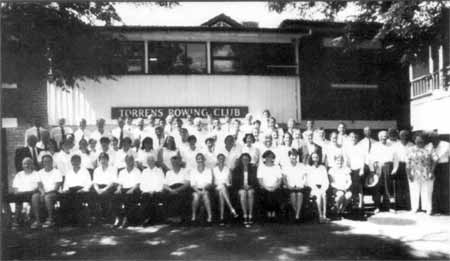 The Millennium Photo. All TRC members in the year 2000.

In 1999-2000 our members shone with performances throughout SA, Australia and the world. The 2000 National Championships at Penrith on the Olympic course saw four of our members attain Gold medals whilst many others gained minor medal placings Subsequently four of our members were selected for crews for the Nations Cup, Kaye Anstey, Belinda Talbot, Miranda Bennett and Andrew Stunnell (coach). Meanwhile Sally Newmarch was selected for the Women's Lightweight Double Scull at the Olympic Games in Sydney 2000.

In 2000-2001 four TRC members represented Australia at the World Championships, but the Sydney Olympics was the focal point of rowing in the country, especially with "Our Sally" competing in the Lightweight Double Scull, to the cheers of thousands of people. A well-rowed fourth place made us all extremely proud. Matthew Draper was appointed Technical Manager of the rowing event and TRC supplied a group of volunteers who excelled with their efforts in keeping the Games going successfully.

2001-02 started off fantastically as the Australian Women's Lightweight Quad Scull, stroked by Josephine Lips won Gold at the World Championships in Lucerne, breaking the world record twice during the regatta. Another TRC member, Miranda Bennett was the reserve for that crew. Subsequently at the S.A Sports Star of the Year Award the crew was named the Team of the Year at a glittering dinner and television broadcast.

Locally, the season was one of moderate success but showed the Club growing in competitive numbers due to good recruiting, which will form the nucleus of the Club in years to come.

The 2002 National Championships saw a strong participation by our Club with fourteen members competing in various boats and categories. The TRC Masters also represented our Club well at the 2002 Australian Masters games and various other events.

Australian team selection for Miranda Bennett proved to be very successful, winning the Women's Lightweight Quad scull and once again breaking the World Record in the process

This year was always going to be a monumental year for the Club, being its 100th year, however progress made on and off the water was greater than expected.

The Club has recruited quality coaches and in turn quality athletes. As a result the "Red and White" was seen everywhere at regattas, and winning almost every race that was entered. One of the highlights was seeing TRC come from behind to win the lst Grade Men's and Women's Eight State Championship races, breaking a five year drought. Dominance in both the Men's and Women's Premiership showed the rest of the State just how far the Club had come and its intentions for the future. 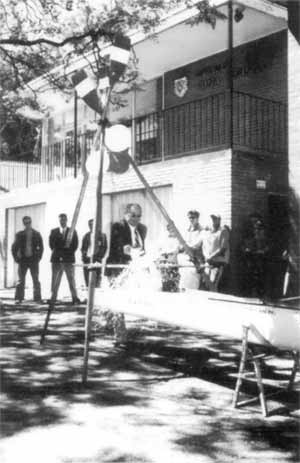 The Club secured a permanent lease on an entire bay at West Lakes, allowing the Club to have exclusive use of a storage and training facility at West Lakes. More finances have been organised to upgrade and extend the Torrens Lake Clubhouse.

After 100 years of existence the Torrens Rowing Club has firmly established itself as a dominant force locally, nationally and internationally. With continuing plans for facility and equipment upgrades, quality coaching and athlete recruiting, TRC members have every intention of building on the last one hundred years and growing in achievement and strength. All the while we remember the Club motto "Mens Sana In Corpore Sano" - "A Healthy Mind In A Healthy Body".

The Centenary celebrations would not have been possible without the tireless efforts of the Committee and a small band of volunteers.

The Management Committee in 2003