As a Club, we continued very successfully, and over the years, had more members represented in Kings Cup crews and later lightweight Penrith Cup crews than all other Clubs put together.

At the close of the season, the dominance of Victoria and NSW was shattered when TRC won the Lightweight Fours Championship of Australia for the Penrith Cup at the Kings Cup regatta. The crew comprised Colin Smith (bow), Vaughn Bollen (2), Bob Cooper (3), Luigi Lippis (stroke), Geoff Worth (cox), Michael Eastaughffe and Peter Cooper (emergency reserve) and Bob Russell (coach).

Vaughn Bollen and Boll Cooper again won the Lightweight Pairs title of Australia at the National Championships in 1974, coached by Bob Russell.

Late in December 1975 the top floor of the clubhouse was almost completely gutted by fire. This resulted in a tragic loss of much treasured memorabilia including photos and pennants. Fortunately having a member of the Club in the fire crew that attended the fire meant that the fleet was saved. The rebuilding of the Club was brought about by the untiring efforts of such stalwarts as Frank O'Brien, John Blank and Bryan Draper.

Frank O'Brien joined the Club late 1950, stroked the Kings Cup crew in Tasmania in 1954 after stroking our winning Championship Senior Eight and held various positions on the administration, including President of the Club 1973-76.

John Blank joined the Club about 1956 and became a constructive influence. He was a member of many championship winning crews, representing SA in the Lightweight Four Championship for the Penrith Cup. He held many administration positions on the committee and was President from 1977-78. 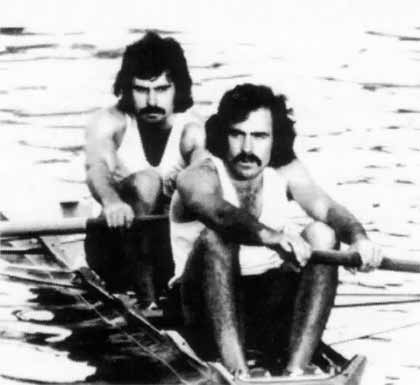 Bryan Draper joined the Club in 1951 and immediately became a dedicated Torrens member, He has held important positions on committees, being Secretary for many years and represented SA many times in the race for the Kings Cup, besides winning innumerable State Championship Eights and Fours.

The following two seasons were quiet. A sad occasion occurred in 1979 with the death of Life member and ex-president Mr Charles Darwent. 1979 showed distinct hope for the future when our crew won the State titles for Maiden Eights, coached by a very keen clubman, Bob Holland who subsequently became Captain.

The SA crew won the Youth Fours Title of Australia at the National Regatta. That crew was coached by Slim Lawrence with TRC member, Matthew Draper, in the bow seat.