The Second World War of 1939-45 brought a cessation of active competitive rowing. The Chairman of the South Australian Rowing Association declared no more rowing for the duration. This may not have been the most appropriate decision as there were plenty of willing rowers in m munitions and allied restricted industries.

The Club was kept functional during this time by the active interest of E.C.W. Martin (President) and Frank Lodge (Captain). With the war over in late 1945, Jack Bollen and Max Richardson, together with some of the more recent members formed a Senior Eight which won the Senior title from a very fine Renmark crew.

There was an influx of many new members during 1946 and all were very keen and competitive, most becoming first class oarsmen. During the winter of 1947, Jack Bollen who had been appointed senior Coach, influenced them to train twice weekly, and by the start of the 1947-48 season they had developed into a wonderful crew. They easily won all their races, including the Championships for the Maiden Eights, Junior Eights, Senior Eights and Senior Fours. These members stayed with the Club for many years and, apart from winning most of their races, have been tremendous supporters of the Club in all aspects. These included Peter Morelli, Remo Morelli, Doug Glazbrook, Laurie Goodenough, Lee Williamson, Des (Curly) Davies, Bill Steer, McLeay Lawrie, Keith Bowley, Bruce Roberts and Don Challinger. 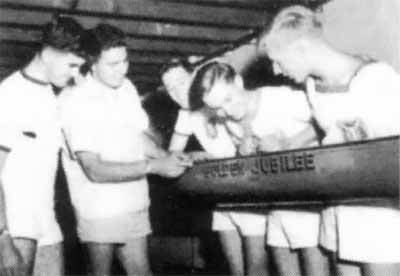 A sad loss to the Club in 1946 was the death of Mrs L.M. Bollen. She was the mother of Jack and Eric Bollen and joined our Ladies Committee in 1931 at the same time Jack enrolled. She remained an integral part of that committee until the day she died

1947-55 were consistently good years with TRC winning most races and nearly all Championship events. Winning of State Pennant and Championships was being accepted as a forgone conclusion. A Championship title race for Junior Fours was held for the first time on 18 November 1950, and the event was won by the TRC crew which comprised Don Challenger (how), Ron Partington (2), McLeay Lawrie (3), John Watkin (stroke) and Ray Monkhouse (cox).

In 1955 Jack Bollen was elected President of the Club, an office he held for the next 11 years. He immediately organised a unique body made up of past oarsmen with the purpose of retaining friendships and helping the Club generally. This group was called the TOMS (Torrens Old Members) and from a small beginning grew to a considerable force within the Club. They have helped by improving the clubhouse, purchasing boats, oars and furniture.

Jack Bollen was honoured by being selected as one of the South Australian representatives to officiate at the 1956 Olympic Games. 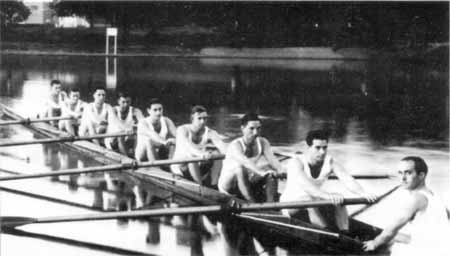