In November 1931, our Senior Eight competed for the Grand Challenge Shield at the Henley-on-Yarra Regatta and acquitted themselves well in a large field from all States. A couple of changes saw the crew win Championship Senior Eights after tour of the crew had won Championship Senior Fours a few weeks prior. Tile Eight was selected to represent SA in the race for the Kings Cup, which was a close finish with our crew a creditable fourth.

During the 1932-33 season a new clubhouse on the Torrens was constructed. The original structure had been occupied since foundation and, being an old weather-board single level building, and condemned by the City Council, it had to be demolished. It was replaced by an excellent brick building. This came to fruition through the drive and foresight of Charles Darwent, a man who had immense organisational ability and Club spirit. The Club rallied to support his leadership. The wonderful Ladies Committee raised the money to initiate the project. Members, both tradesmen and non-tradesmen, carried out the work of construction in a voluntary capacity. The Ladies Committee continued their good work and the building was paid for years before expected.

1933-34 saw the election of Charles Baumann as secretary of the Club, and he set a very high standard for years to come. It was the wholehearted manner in which he entered into his work that enabled the Club to be so successful from both a rowing and social point of view. 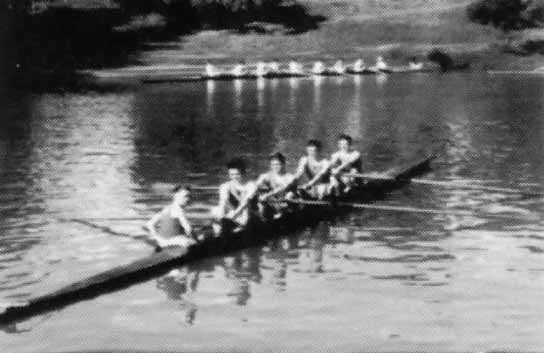 Another successful season was experienced in 1934-35, our crews winning Championship Junior Eights, Senior Fours and Senior Eights in convincing style. Charles Darwent coached all these crews.

The first Annual Dinner of the TRC was held in the Hotel Rundle on 26 June 1935. It was such a wonderful show that the dinners continued as a Club tradition.

During 1935-36 TRC exploited its "will to win" to the full. All the main Championships were annexed by TRC, and again the Club comprised the nucleus of the Kings Cup crew with Alf Gregory stroking it for the first time with Bill McCann (7), Max Richardson (2), Deb Earl (cox) and Tauf Qurban (coach). The crew raced to a magnificent Second placing.

Alan Broadbent donated a new racing Eight which was justifiably named "Deb Earl". This boat was the first in SA to be constructed with tapered runners and swivels. The boar cost £120 and the Club paid £25 for a set of racing blades.

The 1936-37 season bad a momentous impact in the rowing sphere because, apart from the fact that TRC again won all the main championships, five members of our successful Championship Senior Eight crew, namely Alf Gregory (stroke), Bill McCann (7), Max Richardson (6), Norm Croker (5), Ken Ormston (4), Deb Earl (cox), Tauf Quarban (coach) and Charles Baumann (manager), were selected for the Kings Cup Crew. They won this prestigious race in marvellous fashion and were the toast of Adelaide and SA. Alf Gregory was subsequently selected to stroke the Australian Eight for the Empire Games and Tauf Qurban as coach of the Australian Four, which won this very fine race.

Jack Bollen returned to the Club after two years transfer to Port Pirie on business and with Bill McCann, Norm Croker, Max Richardson, John Sprod (cox), Charles Darwent (coach) and Charles Baumann (manager), flew to Melbourne to compete at the Henley-on-Yarra Regatta for the Stewards Challenge Cup. After a magnificent race, the event was narrowly won by the Melbourne University Crew. History was created by this being the first rowing crew to fly to a competition within Australia.

1938 was a sad year for the TRC because through a misunderstanding Charles Darwent severed his active connection with the Club and continued very illustrious service with the Port Adelaide Football Club in the SANFL.

In 1939, the Championship for Maiden Eights was inaugurated and was won comfortably by TRC .