Early in 1903, a number of young men in Adelaide discussed forming a rowing club. The upshot was the appointment of Messrs C. Kellett, O. Payne, G. Ross, E.A. Stunning, C.J. Supple, E.C.W. Martin, J.W. Brooks, J.J. Fahey and A.W. Styles as a steering committee. At the inaugural meeting, held at the Norfolk Arms, Rundle Street on Friday evening of 6th February 1903 it was decided to call the new association the Torrens Rowing Club.

The Mayor of Adelaide, Mr Cohen, M.P., was elected Patron, Mr J.R. Anderson, President, and Messrs. C. Ferrors, J. Hogg F. Basse, R.E. Howie and J. Guest Vice Presidents. Initial membership was between 30 and 40 and the shed on the Torrens River was purchased for £60. The new Club's oarsmen were to race in scarlet guernseys with white hats and knickers. Mr Anderson, the President, congratulated the members on the successful formation and hoped that the future would be crowned with success. 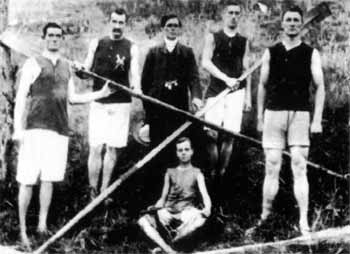 The Club immediately won some fine races with such men as Wylie Nation (later Superintendent of Police), Alan Broadbent, W. Nobler and F. Lock with J.J. (Trick) Fahey as coach. These were followed by amongst others, the Wadewitz brothers, one of whom was Ern Waddy, a top fighter and holder of the title of middle-weight Champion of Australia. They won many races up to 1912.

Although the Murray Bridge Club was making its presence felt, TRC more than held its own, winning a wonderful race on 28 February 1914 for the State Senior Eight Championship. The crew contained George Harrison (st.), Jack Murrat (7), Alick Olsson (6), A.A. Miller (5), J.P. Tymons (4), E.W. Tahe (3), J. North (2), F. Woodhouse (bow), W S Webb (cox) with Leo Le Cornu and Tauf Qurban as trainers and Charles Kellett as coach, all of whom gave great service to the Club for many years.

During the next couple of seasons, TRC crews won the Stewards Challenge Cup at the Henley-on-the-Yarra Regatta, which was, until the introduction of the Australian National Championships Regattas in the 1960's, considered the unofficial Fours Championship of Australia. 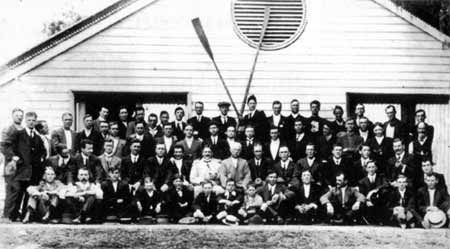 Foundation Members at the 1903 inauguration of the Torrens Rowing Club.