The regular 1956/57 rowing season was continuing, although much disrupted by the Olympics. It was, as a whole, a disappointing one for Sydney, the main success coming from a lightweight maiden four of Jim Juleff (bow), Geoff Knight, Wally Brownfield, Doug Bentley (stroke) and Dick McCaughey (cox). 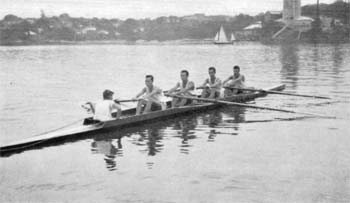 No eight was boated for the State championships for the first time in many years. Some successes were gained, however, by the club's scullers, Bill Goulding, Barry Green and Peter Turner, while Gordon Lawson won the club's only championship in the 3 mile sculls (in which Green was second). 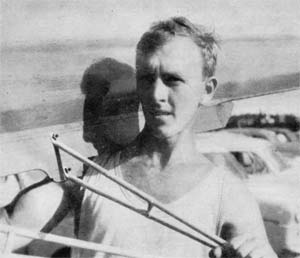 Leichhardt dominated the scene, winning the champion eights and fours, the lightweight eights and fours and, with Roll and Mackenzie, the double sculls. Both junior eight and junior four championships went to Mosman, Bruce Evans, son of Fred Evans and the former Rose Goodman, stroking both crews. Eric Longley was elected State sole selector for the 1957 King's Cup and his crew included five Leichhardt men and three from Mosman. He nominated both himself and Evatt, stroke of the crew, as co-coaches, but Evatt turned the position down.

The race was rowed in Brisbane, with Victoria taking the lead off Queensland at the half mile and being never headed thereafter. NSW challenged and went past Queensland to finish second, 4 lengths behind the Victorians. The NSW sculler in the President's Cup was Mackenzie, who beat Lawson in a test race (he missed the State championships by competing in NZ and he beat Rowlands to win the NZ championship). In the race in Brisbane, he led from the start to score an easy 12 length win from Squires of Tasmania. (Soon after, Mackenzie, who had transferred from Leichhardt to Sydney, went overseas. He competed at Henley Royal Regatta in 1957 and beat Ivanov, the Olympic champion, by 4 feet in the final of the Diamond Sculls. A little later, he also won the sculls at the European championships, beating von Fersen of West Germany with Ivanov third.)

Empire Games trials were a feature of the 1957/58 season. Another was the unsuccessful effort to grade Sydney's rowing clubs into two divisions according to their strength and to conduct races for those divisions. Four "divisional" regattas were conducted. Leichhardt won the early senior eight events and, at Sydney's divisional regatta in October, they also won the State's Empire Games test race, beating Mosman by 6 lengths. Longley, Leichhardt's coach, proceeded to select his State eight, the idea of a further trial with a "second" eight falling through.

At Sydney's regatta in November, a re-constructed Leichhardt eight surprised by beating the NSW crew over 1/2 mile while another exciting event was the lightweight senior eights in which Haberfield and Leichhardt dead-heated, rowed-over and dead-heated again, rowed-over again and, after a stroke-for-stroke struggle, Leichhardt won by 6 feet.

A Sydney junior four of Max Perkins (bow), Jim Woodcock, Barry May, Paul Cox (stroke) and A. Smith (cox) had a string of wins early in the season but, in the championship event in December, finished second to Leichhardt. Wood and Riley, back in the double sculls, were the main source of other excitement for Sydney supporters.

Sydney boated its junior eight in the State championships in February, but the race was well won by Leichhardt with Mosman second again. The Sydney crew - boated Peter Darragh (bow), Paul Cox, Col Hinrichsen, Ted Rowlands, John Pilger, Jim Woodcock, Barry May, Ian Letts (stroke) and Bruce Holden (cox) - surprised, however, by beating Leichhardt's eight a fortnight later at the Hawkesbury regatta. The crew went on to win two more junior eights, finish second by a canvas to Shore in the championship, and finish second in the Founders' Cup at Henley-on-Yarra (held in March instead of November since 1955).

NSW won every event in the Empire Games trials held at Lake Wendouree and Penrith in January, 1958. The eight beat Victoria by 1/2 length after an exciting finish, the final NSW crew including Waddington, Currall, Schweikert, Clinton, Gray and Robberds (cox) of Leichhardt and Kevin Evans, Railton and Allen of Mosman. Wood and Riley beat a Haberfield crew in the double sculls, while the NSW eight split up into a coxless four and a coxed four and won both events. Webb and Jim Chapman of Haberfield beat Raper and Grace to win the coxless pairs. Mackenzie was added to the team without being asked to return for a trial. 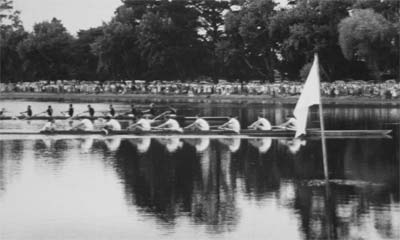 A second NSW eight was chosen to compete in the 1958 King's Cup. The crew contained four Mosman men, three from Leichhardt and one from Nepean, with Cox of Sydney an emergency. Cayzer was appointed coach and his crew went well in trials, even defeating the Empire Games eight over 3 miles. In the King's Cup on the Nepean, however, they finished only third to Victoria and WA, the margins being 1 1/2 lengths and 1 length.

The sculls went to Steve Roll of NSW, winner of both State championships and a member of Leichhardt's winning champion four and eight. Roll won easily over Squires and Hubbard. There was a third race at the carnival: the Australian Amateur Lightweight Four-Oared Championship. NSW was represented by the Leichhardt four of Bushell (bow), Docherty, Paterson, Henderson (stroke) and Macpherson (cox) which had won the State championship under the guiding, hand of coach Bert Harding. After a neck and neck struggle, the first event for the title went to Victoria by 3 feet, with Queensland 5 lengths behind NSW third.

The 1958 event was not the first interstate lightweight race. A lightweight four was included on the programme for the Olympic Games test races on Lake Wendouree in January, 1948. Leichhardt also supplied the State crew on that occasion (Bert Harding being in the bow seat) and NSW scored a win from Victoria.

The raising of funds for the Empire Games team was finally achieved, and the squad left for Cardiff. There were two late changes: Bruce Evans replaced Gray in the eight and Roll replaced Chapman in the pair-oar. Eric Holford of Mosman was manager of the overall squad. The eight competed and won at Marlow Regatta, straight after arriving in England, and lined up for the start at Henley Royal Regatta. The crew qualified for the final of the Grand by beating Thames in a heat but, rowing as Leichhardt, they were beaten by Trud Club of Russia in the final. 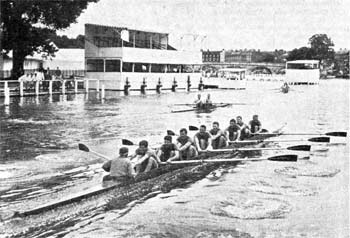 Roll and Webb in the pair and Wood and Riley in the double were also beaten, Australia's only success being a further win by Mackenzie in the Diamond Sculls (during which he angered officials by easing up in the heat and raising his cap to the crowd and by rowing back up the course after the final for a victory run in front of the stewards' enclosure).

The Games themselves were held on Lake Padarn in Wales in July, 1958. Australia won one gold medal, two silver and two bronze from six starts with all crews qualifying for the finals without resort to the repechages. The eights final was closely fought out in turbulent conditions with Canada finally beating Australia by 1 second, with England well back third. Mackenzie scored a good win over Hill of NZ in the sculls and he also rowed with Wood in the double sculls but, even so, they were beaten by a very fast English combination. Members of the two fours had already competed in the eight, with the coxed four finishing third to England and Canada and the coxless four finishing fourth in a race won by England. NZ won the pair with England second and Webb and Roll third. 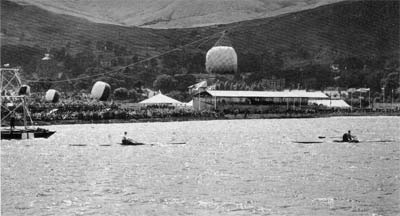 The 1958/59 season, with no international events scheduled for Australia, was, again, rather quiet. The retirement of Wood, along with Riley, marked the end of an era for NSW rowing and, of course, for SRC itself. There were no less than 18 regattas for clubs during the season, including those at Windsor, Taree, Lismore and Grafton. In addition, a new event altogether was introduced at the beginning of the season. Scullers, fours and eights were despatched at short intervals from Haberfield Rowing Club on the 3 1/2 mile journey to Sydney Rowing Club. Their times were recorded at the start and the finish and the crews and scullers doing the fastest times in their divisions were awarded the winning trophies. Sydney's open eight won the inaugural title of Sydney Head-of-the-River, with a fastest time overall of 25.15, while the club also finished first in three other divisions.

Sydney scored a total of 28 wins during the season, finishing third in the premiership. Most prominent were the coxless pair oar of Barry May and Dick White, who scored five wins, including at Henley-on-Yarra. A new star was also on the horizon: at Sydney's own regatta in November, 1958, a maiden four containing a young, hefty and keen oarsman named Alf Duval scored a good win. Sydney's scullers gained more prominence, with Mick Wignall winning the lightweight champion sculls of NSW and Bill Mison having a number of successes. Wignall and Bill Goulding also took out the double sculls at Henley-on-Yarra and the Metropolitan Regatta.

Two new championships were introduced in the season - lightweight double sculls and lightweight pair-oar - bringing the total to 14 in all. Of these, Leichhardt won exactly half, with Haberfield winning four, and Sydney, Mosman and Nepean one each. Leichhardt won the eights over both 2000 metres and 3 miles, while Haberfield's new champion, Ian Tutty, beat Roll to win the 2000 metre sculls and teamed with Webb to win the double sculls. The 3-mile championship sculls was won, however, by Hatfield of Mosman.

NSW was victorious once again in the 1959 King's Cup. Evatt and Cayzer had coached Leichhardt's winning eight and they were appointed coaches. Currall, Schweikert, Curtain and Waddington of their own crew gained selection, along with Railton, Allen and Hudson of Mosman and Annett of Nepean.

The big race was rowed at Perth, before a crowd estimated at 50,000 (although a supporting event wag the WA Public Schools Head-of-the-River). The NSW eight improved rapidly in training and rowed excellently on the day to take the lead at the mile and row away to win by 4 lengths from Victoria, with WA 2 lengths back third.

Hatfield had a very convincing win in the sculls, beating Hubbard by 14 lengths, while the locals, WA, beat NSW by 2 1/2 lengths in the lightweight fours, now being rowed for the "Penrith Cup", presented by Penrith Council. The NSW crew, once again, was Harding's winning Leichhardt four in the NSW championships.

Sydney's only championship of the season came from May and White, who also won the coxless pair at four other regattas. Bill Mison won four senior sculling events during the season while the lightweight double scull of Wignall and Goulding scored further successes. Stewart Derwin went on to win a coxless senior four at the end of the season and perform the rare novice-to-senior feat in his first year of rowing.