Rowing was in the spotlight in Australia as the new decade opened due to the efforts of Merv Wood. In winning the Olympic title in 1948, Wood had automatically won the Philadelphia Challenge Cup which was first presented in 1921 for the "world amateur sculling championship" (a title hotly contested by the Henley Royal Regatta Committee on behalf of the Diamond Sculls!). The Cup was to go to each Olympic sculling champion-the first recipient being John Kelly of the USA, the 1920 Olympic winner - and could be competed for by challenge between Olympic years on the giving of six months notice. 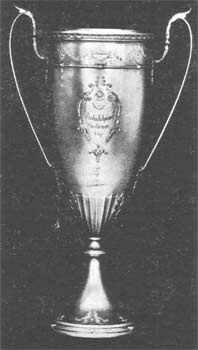 Challenges had, in fact, been very few. Kevyn Webb lodged a challenge soon after Wood's Olympic win but an injury prevented Webb taking the matter further. Wood did, however, accept a challenge to defend the cup on the Schuylkill River in Philadelphia in September, 1950. A number of outstanding scullers were invited to take part, but the other contestants narrowed down to John Kelly, jnr. of the USA and Tony Rowe of England, winners of the 1949 and 1950 Diamond Sculls respectively.

Full expenses for Wood plus trainer, coach or wife were offered and, as Merv had never had a coach or trainer, Betty Wood went along for the trip. Great interest attended his training for the event (which included the finding of a corpse floating in the river!). Although aged 33 to Kelly's 22, Wood was in first-class condition for the race and was made an odds-on favourite by local experts. Over a 2000 metre course, he beat Kelly by 2 lengths with Rowe a length back third, the time being 7.14.2.

Kelly led early, but Wood took the lead half a mile from home and was untroubled to win. Great applause from the crowd of 60,000 people greeted his return to the pontoon. Attractive professional offers were immediately made to him by Bobby Pearce for races in America and Australia but the modest Sydney policeman turned them down once again and returned home.

The 1950/51 season was of exceptional interest for at least one other reason as well. Australia had accepted an invitation to send an eight and a sculler to compete in the Canterbury Centennial Games at Christchurch and in the NZ championships in January, 1951. By winning the 1950 King's Cup, NSW also won the honour of representing Australia in the two events, with Joe Gould being appointed sole selector. Although the race was well off, a squad of eleven men was selected at the start of the season, with none being permitted to row for his club. Sydney was straightway much affected with Tinning, Palmer, Middleton, Cayzer and Chapman selected in the group, along with Anderson, Finlay and Greenwood of Leichhardt, Selman of Mosman and Hopkins and Pain of University. 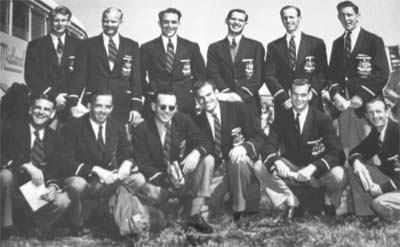 Nevertheless, when the new season commenced, it was Sydney which won the senior eights at the opening regatta, beating Haberfield by 3/4 length. The crew was Bill Andrews (bow), Warwick Mahoney, Arthur Williams, Eric Donald, Peter Hotten, Bill Farthing, Dick Browne and Arthur Thomas (stroke), and they gained a string of additional wins as the season progressed.

Points were also forthcoming for Sydney from a very strong maiden eight which was boated K. McCausland (bow), L. Walker, G. Miller, E. Foster, G. Pilger, M. Friend, F. Malone and B. Leamey (stroke). Sydney despatched a large group of oarsmen to Melbourne for Henley-on-Yarra. John Rodgers scored an easy win in the sculls and also competed with his coach, Herb Turner, in the doubles.

The maiden eight sought to defend the Founders' Cup but was well beaten in the final by Mercantile. "Mercs" also proved to be the downfall of the senior eight, beating them in the heat by 3 feet and going on to dead-heat in the final with Melbourne University, and then to win the re-row.

Sydney's seniors gained revenge at the Metropolitan Regatta, attended by the two "Grand" dead-heaters. Sydney won the Kerr Cup by 1 1/2 lengths from Mercs with Melbourne University 1 1/2 lengths further back. Wood, back from America, easily won the 2000 metre champion sculls.

Attention now turned to the big races in NZ. The Australian crew was finally boated Tinning (bow), Anderson, Palmer, Greenwood, Selman, Finlay, Pain and Cayzer (stroke). Norm Grounds was unavailable to coach due to business reasons and Tom Chessell was chosen as cox and coach of the crew. When Wood declined to seek more leave, Webb was selected as Australia's sculler. The emergencies for the eight, Middleton and Chapman, were to row for Australia in the Centennial Senior Pairs, while Haberfield sent representatives for the single and double sculls and the senior pairs.

Great interest attended the other international eight that had accepted an invitation to compete: the University of California eight, coached by Ky Ebright, coach of the winning Olympic eights in 1928, 1932 and 1948. Three heats were rowed in the eights, over a distance of about 2000 yards. The Australians won their heat easily by 4 lengths, the Americans won by 1 1/2 lengths in a faster time than the Australians, and Aramoho won the third heat.

Australia and the "Golden Bears" met in the first semi-final and the Australian crew won by 3/4 length after a great race. The Americans went on to win the repechage and qualify for the final, where they were beaten once again by Australia, this time by a canvas only.

In the other events, Webb won a heat of the sculls, but was beaten by Douglas of New Zealand in the semi-final and the latter went on to beat Schneider in the final. The Australian pair won the final by 4 lengths and Webb and Cannon won the double sculls. The NZ championships were rowed a week later and the Australian and American eights met again. This was also a very closely contested event, with Australia winning for the third time, by a canvas. Australian rowing officials were, of course, delighted with the result. Ebright was also much impressed, commenting that "this crew has remarkable talent, and I only wish we had the same type in America".

Back in Sydney, SRC's success continued. The club's eight won the State 2000 metre championship and, in the three-mile event, Sydney was successful again, beating Leichhardt by 3 lengths. The five international oarsmen in the crew had been joined by Andrews, Browne and Williams. Gould now selected his eight for the King's Cup. He made only one change from the crew which rowed in NZ: Middleton went in and Anderson joined Chapman as reserve.

The race was rowed in Brisbane in rough conditions, and, for the fourth time in a row, NSW brought home the King's Cup. The official result gave them a win over Victoria, stroked by Bob Aitken, by 2 1/2 lengths, with WA 5 lengths back third. Wood, who had easily retained his NSW title, beat Rawlins by 15 lengths to win his sixth President's Cup in a row. (The races themselves were included in the Commonwealth of Australia Jubilee Celebrations and trophies were supplied by the Commonwealth Government.)

The forthcoming Helsinki Olympic Games dominated the 1951/52 Sydney season. Gould was appointed sole selector of an Australian Olympic eight, while an AARC postal vote nominated Wood as first choice for Olympic selection and an eight second. Gould invited three oarsmen from other States to join his squad but none qualified for final selection. At the opening regatta, the Olympic "test" eight, had an easy win over Haberfield and Sydney and they repeated their success as the season progressed. The crew won the State 3-mile championship by no less than 9 lengths. 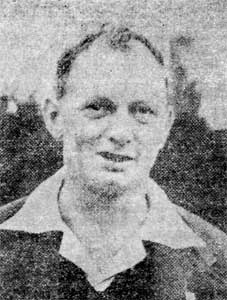 Wood, now transferred to Sydney, won the sculling title once again, while Sydney had other championship victories in the double sculls (Rodgers and Riley), which was also an Olympic trial, the lightweight eight and the lightweight sculls (Barry Green).

The champion fours saw Haberfield first with Tweed Heads beating Sydney for second. Gould's final crew was the same as that which had romped away with the championship: Tinning (bow), Middleton, Palmer, Chapman, Greenwood, Finlay, Pain and Cayzer (stroke) with Chessell cox and coach and Anderson and Williamson emergencies. He also nominated the crew to represent the State in the 1952 King's Cup on the Nepean, and this selection stood, despite protests by a number of other clubs.

NSW started hot favourite for the event, although Chessell warned that the crew would not be at its peak and, of course, its training was being directed to the 2000 metre Olympic distance. It was a tremendous shock, however, when Victoria won the King's Cup with NSW a poor second, 4 lengths back. Tasmania was third. Doubts as to the Olympic crew's prospects at Helsinki immediately arose. In the President's Cup, Wood beat Rogers of Queensland by 300 yards. His time, and that of the Victorian eight, set new records for the Nepean.

Financial problems had certainly caused the Olympic crew concern. The Olympic Federation included only Wood in its original team of 35 but indicated that the expenses of five members of the eight would be paid if additional funds became available. The amount necessary was forthcoming, but the NSWRA still had to raise £4,500 to send the additional members of the eight and the two reserves. A further sum of ₤1,500 was obtained by friends of the double scullers, Rodgers and Riley, and they too were included in the team.

At Henley Royal Regatta in 1952, the light blue of Sydney Rowing Club was seen once again, worn by the eight, the double scullers and Wood. The eight beat Thames in its heat and, in the final, met Leander, the crew which was to represent England in the Olympics. They drew the poorer of the two lanes and, although finishing strongly, were beaten by 0.8 seconds. Leander recorded 6.38 to break the course record by 6 seconds. 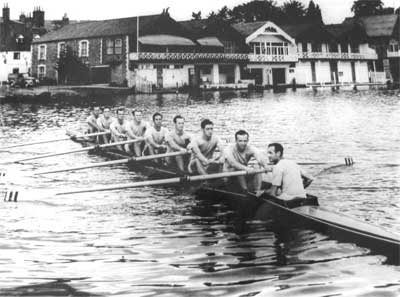 Wood, who had won at Marlow, again won the Diamond Sculls, beating Fox of Britain by 2 1/2 lengths in the final. Rodgers and Riley also reached the final, but were beaten by a Belgian crew. The Australian crew for the Olympics included Anderson and Williamson, with Middleton and Palmer becoming reserves. Their final training was, however, disturbed when a rib injury to Merv Finlay gave trouble and he rowed in the heat in considerable pain. The crew raced stroke for stroke with the Yugoslavia eight, until Finlay crabbed badly and they were narrowly beaten. The other crews, Canada, Finland and Rumania, were well back.

The eight, with no change in the crew being possible, now moved into the semi-finals, meeting USA and Russia. They were content to finish third and to contest the "top repechage". In this race, with Finlay considerably recuperated, the crew won its way into the final by beating Yugoslavia quite easily. In the final they rowed magnificently to gain third place, and the bronze medal, behind USA and Russia, with the Leander crew fourth and Germany fifth. The winning time was 6.25.9, 7.2 seconds faster than the Australians. 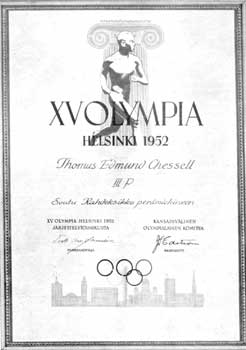 Wood, in the sculls, was affected by an old wrist injury and also a stomach disorder. He won his heat comfortably, was beaten by Fox in the semi-final, but won the top repechage quite easily. In the final, he had to be content with second place, being beaten by just over a length by the 22-year-old Russian, Tjukalov. The emergencies, Palmer and Middleton, rowed in the pair-oar. They won their first heat but finished second in the semi-final and were eliminated in the repechage. Rodgers and Riley finished third in their first race, won their first repechage but were eliminated in the top repechage event.