Back in Sydney, a Twilight Regatta was staged on the Parramatta River to take advantage of the English crew's one day visit prior to returning home. Races were held over 1/2 mile on the Sydney course with the English eight winning by 3/4 length from Leichhardt with Sydney High third.

Some big races in the NSW season still remained. Much interest attached to the State 2000 metre senior eight event, held a fortnight before the three-miler. Sydney's crew was 1 1/2 lengths clear of Haberfield at the half-way mark, when the crew crashed into a pylon of the Iron Cove Bridge. Ten feet of the bow of the racing shell was torn away, while Leichhardt went on to win by 1/2 length from Haberfield.

In the big race at Penrith, however, Sydney made no mistakes. The crew of Andrews (bow), Mahoney, Browne, Chapman, Palmer, Middleton, Tinning and Cayzer (stroke) won by 2 lengths from Leichhardt with University 3 lengths back third. Repeated challenges by Leichhardt were held off and Sydney was drawing away at the finish.

An overweight Merv Wood still had an easy win in the champion sculls, with Riley finishing second. In a later regatta, Sydney also succeeded in winning the champion junior eights of NSW. There were a number of surprises in Gould's State eight. Only two members of the successful Empire Games crew-Cayzer and Tinning-gained seats, although the emergencies, Palmer and Middleton, moved into the crew. Three Leichhardt men, Anderson, Finlay and Greenwood, were selected, along with Hopkins of University. Tom Chessell was selected as cox, Norm Grounds coach, and Ernie Chapman emergency. 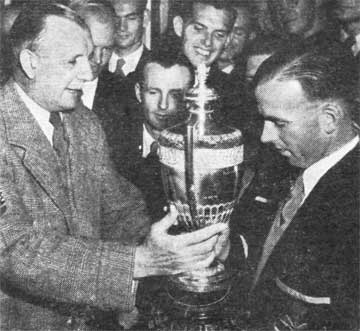 Phil Cayzer receives the King's Cup from Governor of Victoria, Sir Dallas Brooks, after the 1950 win

The King's Cup was rowed on the Yarra in 1950, and NSW scored an easy win. The crew beat Victoria by 4 lengths, with WA 4 lengths further back third. The time of 12.40.5 broke the course record, set in 1914, by 52.5 seconds. Wood, sculling for the first time on the Yarra, had a narrow escape against Rawlins, rowing again for Victoria, but held him off to win by one foot. His time was also a record. In the five King's Cups rowed in the decade, NSW had won three and come second in the remaining two, while Wood had won the President's Cup all five times.

The Head of the River was not conducted during the war years, the expense involved in a regatta on the Nepean being regarded as unwarranted under the conditions. The GPS headmasters gave their blessing, however, to schools competing in open events at club regattas. The breach was filled in 1941 by the usual Riverview Regatta and the holding by Sydney High of a regatta restricted to school crews. All GPS schools participated in the latter, with Shore winning six of the nine events, including the senior eights. They beat St. Joseph's by 3/4 length over the 1/2 mile Parramatta River course.

An "Unofficial GPS Regatta" was conducted in 1942 by a committee from Shore, Grammar and Scots, the eights rowing over a mile on the Parramatta. In an exciting finish, Shore beat Joeys by1/4 length, the crowd of 5000-odd contrasting markedly with those of pre-war times. Shore's splendid 1943 eight had no difficulty winning the unofficial title that year, High being 5 lengths back second. Shore also won the lst, 2nd and 3rd fours at this regatta, which was controlled again by Sydney High. Shore's run came to an end, however, in the 1944 unofficial event, when a fine Sydney High crew beat them by a length. In 1945, Shore beat High by 1/2 length but, in a sensational move, the GPS rowing sub-committee overruled the decision of the umpire and upheld a protest against Shore. A separate regatta between King's and Newington crews commenced in 1945.

With the end of the war, the official competition was resumed, and the Nepean again became the scene of the annual clash. The 1946 and 1947 events were held over 1 1/4 miles but, thereafter, a course of 1 1/2 miles was reintroduced. Scots scored their first-ever win in 1946, beating King's by 1/2 length. Newington, coached by Col Davies, won their first race since 1921 the following year, beating High by 2/3 length. High got to the front once again in 1948, beating Newington by 1/2 length and winning also the 1st, 2nd and 3rd fours. In 1949, it was Shore's turn, as it was to be for the following three years. They beat High by 1/4 length in 1949 and, in 1950, beat Scots by 1 1/2 lengths (after the race had been postponed for a week due to flooding). Len Robson retired from coaching after the 1949 success.

Rowing by women in NSW fell right away during the decade, with only the Sydney Ladies' struggling on with a tiny number of members. The Abbotsford Ladies' club became defunct very early and Balmain and YWCA soon followed. The NSW Women's Rowing Association also became inactive during the war years. An interstate race was held on the Yarra in 1941, with Victoria beating NSW by 4 feet. Thereafter, the race lapsed until 1949.

The NSW State title was won that year by Tweed Heads and the crew went on to win the interstate race, repeating the effort in 1950. There was an interesting novelty event on the programme of the Sydney Ladies' regatta in 1940. Crews represented England and the Dominions, the fighting services and the "enemy". John Bull and the Dominions won, while a crew containing "Goering", "Stalin", "Mussolini" and "Hitler" was scuttled half way over the course and failed to finish.

Meetings of the Australian Amateur Rowing Council recommenced in 1946 when the King's Cup resumed. NSW proposed the rowing of the championships over 2000 metres but won no other support (and, by 1950, when Queensland put forward the identical proposal, the NSWRA had changed its mind and voted against). Competition with NZ crews was also considered in 1946, with the Council simply resolving it would have no objection to any State Association sending crews to NZ or inviting NZ crews to take part in its regattas or championships.

In 1948, NSW put forward another of Kevyn Webb's suggestions, namely that national championships over 2000 metres be held yearly for competition by club crews, with Ballarat being considered as the first venue. This was defeated, only NSW and Victoria being in favour. The 1950 meeting did agree to a further NSW suggestion regarding establishing a basis of financing future international representation. Agreement could not, however, be reached on what that basis should be.

The NSWRA remained active throughout the decade. A comforts fund for oarsmen on active service was established in 1940 and, in conjunction with the Union of Old Oarsmen, canteen orders were made available to many oarsmen overseas. Assistance was also offered to the Volunteer Harbour Patrol when it was established in 1942 (and it even became necessary for club members to obtain National Security Passes to enable them to continue to make use of the harbour).

A Post-War Rowing sub-committee met during the latter part of the war to plan future activities, while a sub-committee also conferred with boat builders regarding improving racing boats and equipment on the lines adopted by other countries. The point score and financial matters were other items to cause concern. After much discussion, the point system was altered in 1946/47 to the following:

It was also decided that no club could gain more than one set of points in any race. The new system was further debated a year later and retained. In 1947/48, capitation, elected member and delegates' fees were raised in an attempt to reduce the deficit being suffered from the financing of representative crews. Heavy reliance on donations from supporters was still made and, in 1949, a Melbourne Cup sweep was conducted for the first time to raise funds. In March, 1950, the RA established an International Reserve Fund, appropriating ₤250 to it from general funds.

Also in 1950, a "Development Committee" was established, with five sub-committees relating to development, finance, publicity, regatta review and regatta drafting. The seven "elected" members of the RA were to form the sub-committees, along with co-opted members. Assistance with the establishment of new clubs and the reformation of old ones was to be a major activity.

The Association was fortunate in its office bearers during the period. Harry Alderson was chairman throughout the decade and continued to distinguish himself in this and other sporting fields. He was ably supported by the efficient and genial John Rook as secretary, although Eddie Buckley retired as treasurer in 1942 to enlist. Geoff Davies began a nine-year term as treasurer in 1946/47.

The Association's president, Judge Thomson, died late in 1942 and Mr. Justice A. V. Maxwell, a former Balmain oarsman, was unanimously elected to succeed him, thus commencing his long term of office. In 1948/49, Milton Johnson completed 40 years as an Association auditor while P. F. Dimond died in 1949/50 after 27 years as an auditor. 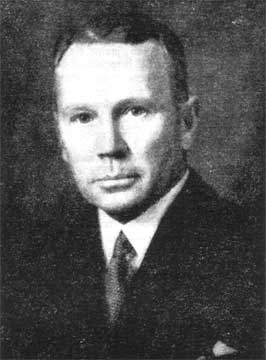 Professional rowing and sculling in Australia was also much affected by the war and there was little activity of note until well after it was over. Bob Pearce retired undefeated as world professional champion in 1947 and suggested the vacant title be competed for in Sydney between Evans Paddon, Max Fisher and George Cook. The three tossed to see who should meet first and, in November, 1948, Paddon, the Australian champion and the last challenger, met Fisher, holder of the Australian one mile open title. The race took place on a buoyed three-mile course on Hen and Chicken Bay, finishing off Sydney Rowing Club.

Paddon was successful in winning the event and the £150 side bet. He put his title up again in May, 1949 against George Cook. The race was rowed at Evans Head on the Richmond River, with Cook winning the title by 12 lengths. Cook and Paddon met in a rematch in May 1950 for £300 aside and, this time, Paddon led all the way to beat Cook by 7 lengths. 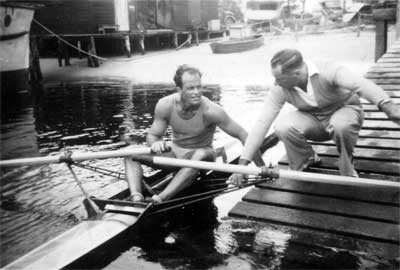 After his win in the Empire Games in 1950, Merv Wood acknowledged that he had received several rich offers to turn professional. "I have considered the offers", he said, "but I am satisfied to remain an amateur." The Parramatta River Sculling League was active late in the decade, with races for the Burns Shield in gladstones and the Towns - Fisher Cup in riggers, both on a handicap basis, being a major activity.