Haberfield predominated in success on the river during the war years. The club won each of the substitute point score competitions which were held until 1947/48. This performance, coupled with the successes of 1938/39 and 1939/40 and of 1948/49, when the premiership and junior pennant competitions were reintroduced, led the Association to state "they have thus set a record of supremacy in New South Wales rowing that is unequalled".

While a comparison which includes the war years is of doubtful validity - with other clubs so much reduced in strength and the season itself so restricted - the performance was certainly outstanding. (It is of interest that it was Sydney in 1949/50 which finally stopped Haberfield's run, just as it was Sydney which had stopped Mosman's great run in 1932/33.)

Activity at many other clubs was not nearly so pronounced. Enlistments took so much of Pittwater's membership that, by as early as July, 1940, the club had become inactive. Hopes to recommence after the end of the war failed to materialise.

Drummoyne had ceased to function by the middle of 1942 although, in this club's case, a sound recovery was later made. Police was not actively functioning by 1943, but attempts at reforming took place in 1945. With the important exception of Wood and Riley, little activity ensued. No crews raced in 1948, and remaining members started to transfer to other clubs. (Wood himself did all his training from Gus Green's shed at Abbotsford.)

Leichhardt did well in the early years but, in 1943, Leichhardt Park, in which the club stood, was taken over by the Americans for war purposes. The club house was promptly moved by the American authorities to a new position opposite Rodd Island and the club re-opened in the new location in March, 1944 with a special regatta.

Balmain was hard hit during the war years, and took a long time to recover. Concern for the club's welfare was still being expressed by other clubs in 1948/49. Both Nepean and Glebe seen to have maintained a reasonable degree of activity, but Mosman was quite subdued and, in the last two years of the decade, performed without success. North Shore kept some activity going and did well in the latter years of the decade.

Sydney University had additional problems. Intervarsity rowing was suspended for the war years while, in 1940, the University's Sports Union recommended demolition of its club house at Blackwattle Bay. This was carried out in the following year. After the end of the war, efforts to find an alternative site commenced (and were not finally successful until 1966). Intervarsity rowing resumed in 1946 with Melbourne winning the Oxford and Cambridge Cup from Adelaide and Sydney. The next three years saw a hat trick by Sydney, including a fine win in 1948 on the Swan by the very strong eight which later won the NSW championship. Melbourne took the title in the 1950 event.

There were also important developments after the war in country rowing. Lismore resumed active participation in 1948/49 while, the following year, the Port Hacking Rowing Club commenced at Cronulla. At Gosford, the Brisbane Water Rowing Club held its inaugural meeting in May, 1950. A further attempt to interest more country clubs in joining the NSWRA was made in 1948 when Kevyn Webb and Neil McCallum visited the northern rivers area. They found eight clubs - Tweed, Lismore, Ballina, Murwillumbah, Woodburn, Evans Head, Grafton and Maclean - with some 600 members between them - interested in the formation of a Northern Rivers Rowing Association, under amateur rules. There were, however, no further developments.

Inter-club racing in the winter months continued throughout the decade, including during the war years. (Races for AIF fours were conducted with, in particular, the "Artillery, 3rd Battery, J. Troop, No. 1" crew of Boulton, Dixon, Clubb and Foskett scoring many wins.)

Sydney won the Cock-o'-the-Harbour in each of 1940, 1941 and 1942 but then it was Mosman's turn for a three-year successful run. Boating difficulties prevented Sydney from starting crews in 1946 and North Shore regained the title. Sydney was back on top in both 1947 and 1948, while North Shore proved successful again in 1949. Close and keen competition again marked the annual series. The honours in the J. B. Sharp series during the war years were well shared between Leichhardt and Haberfield, while Haberfield predominated after the war. 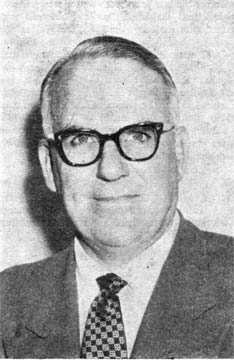 In 1947, the Walker and Hall sculling series - held only once during the war years-was revived and held in conjunction with the J. B. Sharp regattas. The Toxteth Cup series lapsed after the 1940 events, won by Police, and Glebe participated in the J. B. Sharp series once again from 1942. The Union of Old Oarsmen continued to flourish as a means of keeping former rowers interested in the sport and as a source of funds for the Rowing Association. By June, 1949, its membership totalled 239.

Seven modified regattas were held during the 1940/41 season, while a number of rule changes were adopted. Open eights replaced all classified eight-oared rowing and open fours in regulation boats replaced senior fours. An under 20 class of rowing was introduced, the distance of all races was made 1/2 mile and an open point score and youths' (under 20) point score replaced the usual premiership and junior pennant. Strong support for the regattas was forthcoming from each of the GPS schools, even though the Head of the River had been abandoned for the duration.

Haberfield won the open eights at the first five regattas (including the Sydney - Police combined regatta and that staged by Shore to raise funds for the war effort), but that was the last of their success. North Shore, stroked by Phil Cayzer, won at the Drummoyne-Balmain regatta on Leichhardt canal and the Gold Cup went to Sydney after Shore finished first past the post and was disqualified for bad steering. The Sydney eight was composed of Roy Hunt (bow), Evan Sawkins, E. Knox, Graham Montgomerie, Jack Guy, Dave Perry, Tom Crawford and Russ Rees (stroke). The Sydney crew of Bill Cook (bow), John Gall, Eric Perry and Eric Webster (stroke) also won the lightweight open fours at the Riverview regatta.

The 1941/42 season was even more restricted than that of 1940/41. There were three regattas in the first half with Haberfield again predominating (at the last regatta of the three, the club was reported to have boated 43 oarsmen and five scullers all under military age). The second half opened with the Anniversary Regatta postponed till later in the year and the Association's regatta cancelled for lack of entries. Sydney's regatta had four races: handicap sculls - won by Peter Kemp, grandson of the former champion; invitation fours - won by Sydney; heavy pairs over1/4 mile - in which Arthur Chadwick's crew won a heat and Gus Green competed; and a novelty "catch the duck" race. Sydney managed no entry for the 1942 Gold Cup and it was won by St. Joseph's in the tightest of finishes from Haberfield and Shore. 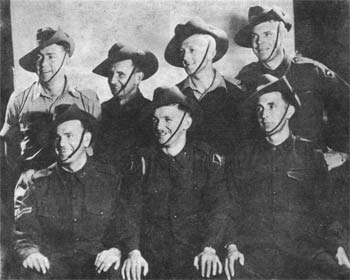 Seven SRC oarsmen who elisted on the same day.

Activity remained limited in both 1942/43 and 1943/44. RAAF crews competed at a number of regattas in 1942/43 (and an RAAF Rowing Club was actually formed at Evans Head). Haberfield again excelled in the open eights, although their run ended at Sydney's regatta in February, 1943, when Shore's outstanding eight, stroked by Alistair Robson, son of the Headmaster, and with Ross Selman rowing 5, scored a 3 length win over them over 1/2 mile. Ken Blackford of Sydney won the handicap sculls, while a Glebe crew which included Sid Rafter and Reg Stride continued a run of successes in the "intermediate" fours, which had replaced maiden and junior events. A separate "service fours" was introduced at this regatta.

Shore's eight repeated its success at the Association's regatta and also in the 1943 Gold Cup (club crews being absent altogether from this event for the first time). Six regattas were held in 1943/44-by the Association, Leichhardt-Haberfield, Mosman-North Shore (the "Anniversary Regatta"), Sydney, Leichhardt, and Riverview. Scots won the invitation eights at Sydney's regatta, with Nepean winning both intermediate fours and handicap sculls. Haberfield won the open fours, and went on to win the Gold Cup.

The rowing scene commenced to recover during the 1944/45 season. There were nine regattas altogether and the number of events, the entries and the attendances were all, particularly in the second half, reminiscent of pre-war conditions. Maiden and junior rowing recommenced although open events continued to replace senior rowing.

Included in the first half programme was a,Nepean regatta, the first at Penrith for five years. The main race was the open fours, in which Nepean itself won from Sydney and Haberfield. There were interesting innovations at Haberfield's regatta in February, 1945: two handicap fours events were held, crews being handicapped on a time basis, while a teams' sculling race was also held.

Australian servicemen competed at Henley-on-Thames in July, 1945, after the German surrender. An RAAF eight was formed for the "Danefield Cup" which took the place of the Grand Challenge Cup at the modified one-day Henley Regatta. The crew included four members from NSW - K. Davenport, R. Cook, L. Foley and J. Sheahan - plus two Victorians, a South Australian and a Queenslander. The crew had only three weeks training together before the race but won its heat and also the semi-final. In the final, it met Imperial College (London University) but was beaten by a length. A similar RAAF crew went on to win two open eights at regattas at Hammersmith and Weybridge a few weeks later, much impressing rowing experts. And so the opportunity for the Danefield Cup to follow the King's Cup into Australian rowing history was only narrowly lost.

The war with Japan ended on 15 August 1945 and the 1945/46 season was almost back to normal. Although it took many months before all oarsmen were discharged from the forces, a championship regatta and the King's Cup were conducted once again. A new class of oarsman - the novice-was introduced at the start of the thirteen-regatta season, with lightweight novice fours and novice eight events being held as well as novice fours. Senior events were not, however, reintroduced. Haberfield continued to show great strength although, at the Association's regatta in November, 1945, Sydney led the way home in the open eights. The crew was boated Howard Holden (bow), R. Cooper, W. Tait, Dave Perry, Bill Bradley, Gordon Clubb, Jock Boulton and Sid Rafter (stroke). 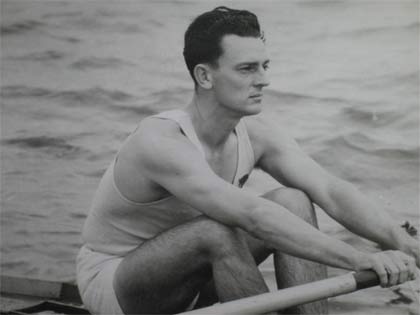 As the season progressed, Haberfield's dominance became more pronounced and they won the champion eights by 6 lengths from University and North Shore. Merv Wood won the sculls by 20 lengths from Reg Stride, Sydney's only win at the championship regatta being in the maiden fours. The 1946 Gold Cup also went to Haberfield once again. The NSWRA informed the AARC in September, 1945 that it was willing to conduct the King's Cup and President's Cup events in 1946 if a total of four entries were received for the former. Eventually, all States but Queensland agreed to compete. Joe Gould defeated Dr. Parkes for the position of sole State selector, but he selected the entire Haberfield eight to represent the State. Lance Robinson was stroke of the crew, with Kevyn Webb 6 and Owen Ruffels 7. Bill Dixon gained selection as a reserve. The Tasmanian eight made "history" by flying to Sydney for the race, while there was excitement in WA when the WARA refused to endorse the selection of the 64-year-old George Rogers, one of the selectors, as stroke of its crew. It was Victoria which finally took the honours, holding off a strong finish from NSW to win by 3/4 length with WA 6 lengths back third. Wood rowed over in the sculls.