It was a decade of mixed fortunes for other clubs in NSW. Mercantile was soon on the way back, despite worries about possible loss of its site for a new wharfage scheme. A lease for several more years was obtained in 1901 after Deloitte led a deputation to the Harbour Trust Commissioners. New craft were purchased and the 1902 report was the best for many years, including an account of the club's win in the Association's premiership for the year. With Nat McDonald as captain and Ernie Keary as secretary, the club thrived. One prominent new member in 1905 was the champion boxer, "Snowy" Baker. The club held its first regatta for a decade in 1907 and, at the end of that year, had 106 members. Wins on the river were, however, becoming more scarce. 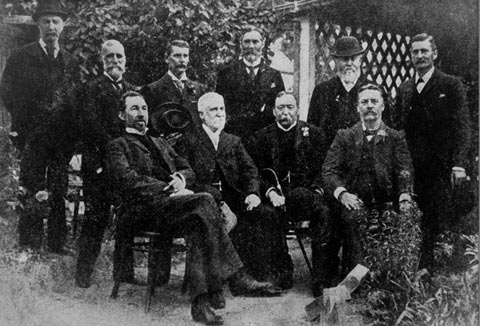 Ten foundation members of SRC at the club's regatta in 1900.

Glebe had great years in 1900 and 1901 and, under John McGregor's captaincy, great enthusiasm was shown by all. At the end of the 1901/02 season, the club had 77 members and a fleet of 16 boats, including 3 eights. However, the club's decision to pay part of the capitation fees for its members of the 1902 interstate crew caused considerable internal dissension, with a special meeting censuring the committee and several members thereof then resigning. Although the split was soon healed, the previous strength could not be sustained.

North Shore had little success in the rowing sphere with the exception of 1903/04 when it gained second place in the Association's premiership. It could, however, boast a brand new shed. Constructed in 1903 in Careening Cove only a few yards from the old site, the new building was a 65' by 50' two-storied structure, roughly twice as big as the old shed.

While Balmain started the decade in restricted fashion, a new wave of enthusiasm in 1903 appeared likely to carry the club to greater success. At the end of that year, however, two of the club's eights were broken in half in rough water and enthusiasm again died. Leichhardt also had little success in competition. The club had 53 members in 1902 and revived its regatta in 1905 after a lapse of a decade. In 1907, extensions to the boat house were completed to provide much needed space.

Balmain Enterprise club had less than 10 members in 1903, but gained readmission to the Rowing Association in the same year for its amateur members, the amount it owed being wiped out. It, too, had very limited rowing success during the period. 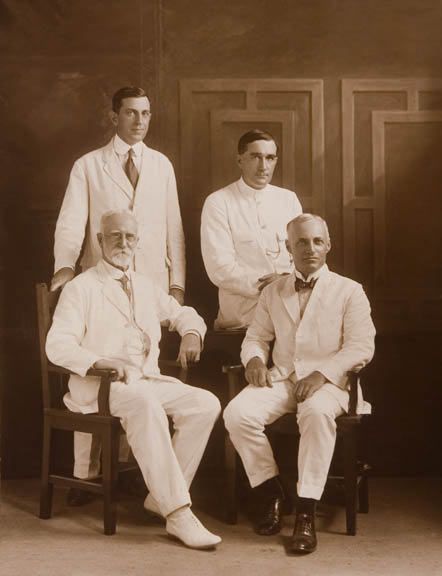 Two clubs became defunct. Easy Sydney breathed its last in 1904, without starting a crew in the decade. It withdrew from the Association in 1902, being unable to pay its arrears of fees, and its boats and shed were sold in 1904. Jack Myers had the distinction of being the club's only captain, holding office from 1886 till the finish. The same fate befell Parramatta Rowing Club. Efforts to revive the club in 1902 were unsuccessful and the shed and boats were sold in 1905. New clubs in the Sydney area were few in number. A Burwood Rowing Club was born late in 1902 but seems to have died in the same year. In 1906 and 1907, skiff clubs using pleasure boats were commenced at Berry's Bay, North Sydney and Middle Harbour, but they were all defunct by 1909. 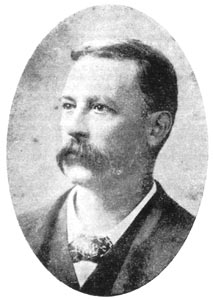 A new trend among city clubs was started by Mercantile in 1905 with the holding of a "rendezvous" of its members to which members of other clubs were invited. About 200 oarsmen, of whom 70 were from Mercantile, attended and it was a great success. Balmain won the tug-of-war that was held. Thereafter, Leichhardt, Glebe and North Shore also held similar functions, all being marked by good spirit all around.

Sydney University, with its annual race against Melbourne and Adelaide Universities, continued to show considerable activity and even won the premiership in 1909/10. The club became dissatisfied with its Woolloomooloo Bay site, however, being too far from the University and the harbour water being too rough. In 1902, the old shed was re-erected at Glebe Point, and a fine new shed was completed in 1907 to accommodate the club's 150 odd members.

Inter-collegiate rowing continued, the honours being fairly evenly distributed among St. Andrew's, St. Paul's and St. John's. The University's Jubilee celebrations in 1902 included an aquatic carnival which was a tremendous success. Held on the Riverview course before some 3,000 people, the highlight was an exhibition of eight-oar rowing, judged by George Upward, who came specially from Victoria for the purpose. Seven crews paddled individually passed him and then each raced back. With points given for dress as well as rowing, Glebe was declared the winner. A faculty race in fancy dress was also a feature.

Sydney University also emerged on top in the annual clashes with the other two Universities. They won six of the events in the decade, with Melbourne scoring three wins and Adelaide one. A conference of the three Universities after the 1907 race decided to restrict the event to undergraduates in the future, the old rule that men could row for eight years after matriculation being abandoned (although Adelaide was permitted to row graduates for the following five years as a concession).

Rowing in country areas of NSW, and especially on the northern rivers, remained active. The annual regatta at Coraki was always a big success, and a rowing club was formed there in 1900. The New Year's Day regatta in Newcastle also attracted much interest. Grafton remained the biggest club outside Sydney, having 82 members in 1904, and keen competition with the South Grafton club continued. Bourke Rowing Club was a vigorous one in the season, "when the river is full", and there were reports during the decade of active clubs at Maclean, Plattsburg, Raymond Terrace, Wilcannia, Forbes, Port Hunter, Wallaga Lake (on the south coast), Tweed River, Eden, Lismore and Murwillumbah.

Sydney battled with Glebe for predominance in the first season of the new decade. It commenced with the St. Ignatius' Regatta in September, 1900 and Sydney won the Gold Cup, beating Glebe by 1 1/2 lengths. Sydney's crew was Brownhill, Wolfenden, Heron, Baass, Moesch, Smith, Cater and Light, a former Balmain rower, stroke.

Over the longer distance of the NSW championship a week later, however, Glebe reversed the result. In a magnificent race (described by Deloitte as the finest he ever saw), Sydney led till near the finish but Glebe drew past to win by 1 1/2 lengths. Consolation was forthcoming in the Association's second regatta a fortnight later when Sydney finished first and second in the champion fours and also took the champion pairs (though being the only club with a suitable boat for the latter event).

The four's superiority to Glebe was again shown in the open event at Sydney's own regatta a week later still. (This regatta was attended by no less than ten old oarsmen who had rowed in the club's first regatta in 1870.) Three of Sydney's crew now contracted typhoid fever and the club did not start in the open eights at Glebe's regatta, their last chance to overhaul Glebe in the premiership for 1900. The final points were Glebe 268, Sydney 222 and Balmain next with 32. There were 29 races held during the year.

The Australian Commonwealth came into being on 1 January, 1901 and preparations for the first "interstate" regatta commenced. In February, 1901, however, Balmain Rowing Club staggered the rowing world by placing on its regatta programme four open races as well as two for members: "rowing men agree that Balmain deserves great credit for tackling so gigantic a club fixture". Blackman, McGregor and Pearson were chosen as selectors for the NSW crew and they chose as coach J. A. Brotherton, a Victorian who "understands the methods which have been so successfully followed by Mr. Upward". Many rowing men, including Deloitte, felt NSW had to alter its style to that of the Victorians before success would come their way.

Brotherton's squad found themselves doing long work in a tub eight rating about 25, but a solid confidence in him was soon established. Four crews went to the starting line on the Parramatta for the 1901 interstate race. NSW started well and was a length ahead of Victoria after two miles had gone. The Vics rowed them down, however, and went on to win by 2 lengths, with SA 1/2 minute behind NSW and Queensland a minute back fourth. Nevertheless, it was generally held that Brotherton had done his job well and the vigour of the NSW catch was in marked contract to that of previous crews. Cater was the only Sydney man in the final crew, although Baass, Clarrie Smith and Brownhill had been in the final squad of 11. The remainder of the crew was drawn from no less than five other clubs. Daley, the NSW champion, easily beat Slack in the sculling event.

Sydney - and NSW - did very poorly in the 1901/02 season. The club's eight for the State championships broke up and Glebe had another easy win in the race itself. Sydney failed even to put a champion four together although Pearson and Roger Fitzhardinge (who had followed his brother's example by leaving Balmain to join Sydney, his father's old club) rowed over in the champion pairs. Pearson announced his retirement from rowing soon after. Sydney also was unsuccessful in maiden and junior events, while Glebe won the 1901 premiership overall by a vast margin from Mercantile.

The State selectors, McGregor, Blackman, and Brotherton, named Fitzhardinge, Heron and Cater in their squad of 11. Bad luck was to haunt the State crew, however, and none of the three Sydney men remained in the final crew. Brotherton was coach once again. In the race, in Adelaide, Victoria won again, with SA second, Queensland third, WA fourth and NSW disappointing sadly by filling last place all the way. Daley did, however, retain the sculls title. (An interesting feature of club regattas in 1902 was the inclusion of "invitation fours" races on the programme for the first time, crews being intermixed from the various clubs. Glebe started the trend, while Balmain held a special race at one stage which attracted enough oarsmen for eleven crews.)

Fortunes were little better in 1902/03. Sydney failed to start a crew in the champion eights in October 1902, with Mercantile wresting the title from Glebe by 2 1/2 lengths. Fitzhardinge and Cater did, however, win the champion pairs; rowing in a tub-pair they still beat their club mates, Bowyer and Moesch, who rowed in the best boat. A win in the maiden fours was the first Sydney success in lower events for some time. The Association determined to have only the one regatta in 1902 and the champion four event was allocated to Sydney's own regatta, much to the club's delight. The SRC crew was winning well until a crab and then a broken blade ruined their chances. Mercantile ran out the winners. The maiden fours was an open race and Sydney won again. Mercantile, with so many championship wins, had, however, easily annexed the RA's premiership for 1902. The new State selectors, Horniman, Helsham and McDonald, were on the job very quickly and decided that, as an Upward disciple had failed to ensure success, they should try the real thing.

Upward, Usher of the Black Rod in the new Federal Parliament, was to be in Sydney in March and April, 1903 and he accepted the position. Cater, Fitzhardinge and Moesch gained selection in the crew. Upward, assisted by Pearson, began from scratch with the crew, making use of a special rowing machine as well. The crew was finally "just like the Victorians" and high hopes were held. Among interested rowing men to follow the crew in its training was Sir Edmund Barton, first Prime Minister of the Commonwealth. In Melbourne, however, the hopes were dashed once again. Victoria beat Queensland by 3 lengths, with SA 1 1/2 lengths back and NSW a further length away. Thomas Bourke of Tasmania took the sculls, with Daley in third place.