The 1903/04 season saw Sydney get back on top. The club had a good win in the champion fours at the Association's regatta in October, 1903, the crew being Fitzhardinge, Cater, Heron and Bill Middleton, the latter formerly of Glebe and a member of both the 1902 and 1903 State eights. Fitzhardinge and Cater took the champion pairs, winning easily in what was still the only best boat on the river, and Sydney also gained second place in the maiden eights. 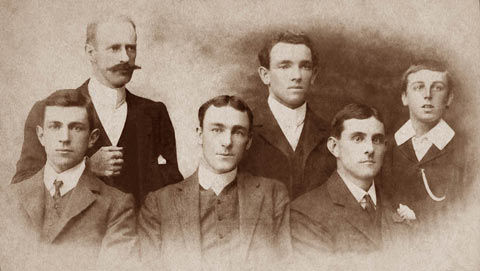 At Sydney's own regatta, the open maiden fours was won by the club, the crew being T. J. Dredge, E. G. Pretty, Sid Middleton and Andrew Sneddon. Mick Cater impressed in easily winning an open handicap sculls from scratch. A "gig and dinghy chase" was on the programme, along with a race for Parramatta River naval cadets rowing in 10-oared cutters. Sydney's new-found strength was further exhibited at the Balmain Regatta in November, with wins in the senior four, junior four and maiden eight, and a second in the maiden pair.

Pearson, following his experience as assistant to Upward and his success since, was appointed sole coach and selector of the 1904 NSW eight. At the same time, he was busy with the strong Sydney eight which scored a good win in the Gold Cup in March. With Cater now concentrating on sculling (and being coached by George Towns), Sydney's crew was Sharp, Pretty, Jack Goldie, Heron, Moesch, Sid and Bill Middleton and Fitzhardinge. The crew had no trouble winning the State championship: "it is a long time since such attractive and at the same time effective rowing has been seen on the river". They beat Glebe by 19 seconds, while Cater, who "has improved, but is not yet a good sculler", took the champion sculls. These wins helped Sydney annex the Association's premiership which covered the period from January 1903 to June 1904 (due to the change in the RA's rowing season to a July to June basis).

Sharp, Pretty and Goldie were replaced for the State eight in Brisbane. Cater was selected but was unable to row and no sculler was selected to represent NSW. Fourth place was the best NSW could do in the eights, Victoria winning again, from SA and Queensland. WA was last. Of the 28 races held, Victoria had now won 23 to 4 by NSW and one by Queens land. Bourke, the Tasmanian, took the sculls again.

An event of note had taken place meanwhile in Victoria. As the sponsor, Captain W. Rivett, put it, a race had been held in Melbourne in 1903 between Dalgety's and the Union Bank, and the spectators were not at all the usual crowd. The idea of an Australian regatta on the model of the Henley Royal Regatta was born. The scheme flourished, and the first Henley-on-Yarra was held on 19 March, 1904, in the presence of the Governor-General. There was a large attendance, with paid reserve areas, house boats, flags and decorations. Sixteen eights were among the many competitors in the 27 contests. Ballarat took the first Grand Challenge eights, and Bourke added the sculls to his list of successes. The regatta was profitable, too, with a surplus of ₤314 being realised, after the provision of permanent trophies. The regatta soon became a major feature of the Victorian rowing year, often attracting crews from other States.

There was considerable drama in the 1904/05 season in Sydney. SRC had little trouble in the 1904 champion fours, racing off ,the start and then slowing to a paddle to score an easy win over Mercantile and Glebe. Goldie stroked the crew, completed by Heron and the two Middletons. Sydney also won the maiden fours, with Keith Corden in the bow seat. The decision of the RA to admit manual labourers to the ranks of bona fide amateurs (discussed below) was now starting to have an effect: Enterprise, started a good crew in the open senior fours at Sydney's regatta but was well beaten by Sydney. Rex Rabett and Roy Barker were two new oarsmen to appear in the maiden four event at the regatta.

Finish of the 1905 champion eight

Sydney took the senior fours at the Balmain Regatta and then commenced training for the champion eights in December. They won the event, but only by 1 length from Mercantile, and the latter promptly charged Pearson with interfering with the race by being on the course in a boat. Pearson had been chosen as one of the State selectors but he immediately stepped down and Ramsay, Horniman and McGregor completed the job. Five Sydney men were in the final squad of 11 when a meeting of the Association resolved to censure Pearson for his action. The five Sydney oarsmen - Fitzhardinge, Heron, Moesch and the Middletons - promptly withdrew from the squad in protest against an action they considered to be unfair to Pearson - and their move was approved by the club's committee.

According to Pearson (and Cater who was with him), he was in a boat moored at Putney Point and had stood up and signalled to both boats as they approached him to prevent one or both running on a dangerous shoal exposed by a very low tide. He denied he was on the course. Mercantile had wanted to let the matter drop on hearing the explanation but other delegates took it up. The eight finally selected contained three Mercantile oarsmen, two from Enterprise and one each from Glebe, North Shore and Balmain. Cater, who had rowed-over in the champion sculls, also declined to compete in the sculling event, claiming lack of training time.

In 1904, five Sydney members-Cater, Goldie, Fitzhardinge, Pretty and Sid Middleton-undertook a 300 mile row by 22 foot skiff from Sydney to Richmond and back. They travelled by steamer to the entrance of Broken Bay and then took to their oars (three pairs) for the head of the Hawkesbury, 116 miles away. At times, the river channels became very narrow and the skiff had to be carried over the shallows on the quicksands. The head was successfully reached, and they set off for the three day return journey back to Broken Bay. There it was found that there was a smooth sea but a storm in the offing and the party set out to row the 20 miles back to Sydney. The trip ended in an exciting fashion when a southerly blew up just as North Head was successfully reached. 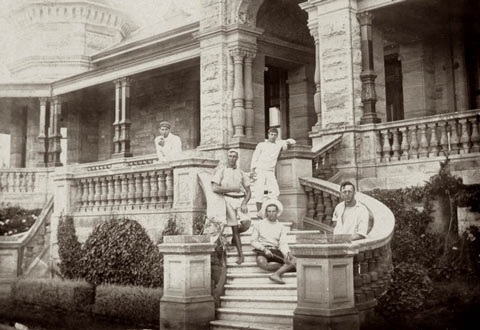 Cater, Fitzhardinge, Goldie, Middleton and Pretty pause by a home on the Grose River

The full field of six crews took part in the 1905 interstate race on the Parramatta River, but there was no change in the result. Victoria won by a length from Tasmania with NSW, rowing in a new Edwards-built boat, several lengths back third. Bourke easily won the sculls (and, the following year, competed at Henley Royal Regatta but without success - unlike F. S. Kelly, an Australian, who won the Diamond Sculls in 1902, 1903 and 1905).

One side effect of the Sydney withdrawal from the State crew was that the club's eight scored the easiest of wins in the 1905 Gold Cup. The club won the 1904/05 premiership, with 180 points to Mercantile's 68. Consideration was also given by the club at this time to sending a four to compete in the New Zealand championships.

Perth was the scene of the interstate race, for the first time ever, in the following season. Sydney's continued success meant the club was well represented in WA. Sydney won the champion fours of 1905 and easily won the open senior fours at the club's own regatta.

There were three newcomers to the club's crew for the champion eights, Barker, F. D. Gore and Edgar Vautin (one vacancy following a falling out between Pearson and Moesch). Goldie, Heron, the Middletons, Fitzhardinge (stroke) and Duffy (cox) completed the crew. In a grand contest, Sydney led all the way, but beat Mercantile by 1/2 length only. Cater did not compete in the champion sculls which was won by Delofski of Enterprise. McDonald, McGregor and Horniman were the selectors and four Sydney men were in the final crew - the Middletons, Goldie and, when Heron dropped out, Vautin. Bray of North Shore gained selection for the third successive year while Cater also went to Perth as manager and emergency.

A gigantic crowd of 50,000-the biggest ever-saw the race on the Swan River in May, 1906 and most rowing men were delighted when Tasmania got up to beat Victoria in the big race. NSW lost almost 2 lengths by crabbing and finished third. WA was fourth and SA fifth with Queensland absent. Ivens of Victoria won the sculls, NSW not being represented.

Sydney continued to enjoy success in competition in 1906/07. In the first half of the season, the champion fours was won and also the open senior fours at the club's own regatta. The Gold Cup was raced for in October, instead of in March, and Sydney won for the third time in a row. A four length win in the champion eights over Mercantile confirmed another premiership win for the club.

Success in the interstate race remained, however, distant. Goldie, Heron, Sid Middleton and Barker rowed in the crew, while Fitzhardinge was selected but had to drop out. Six crews competed again, with Victoria winning from Tasmania and Queensland and NSW only fourth. Ivens won the sculls, defeating Green, the NSW champion, by 3 lengths. A newcomer to the 1907 NSW eight was Harry Hauenstein of Leichhardt, while Ernie Keary was a member of Mercantile's senior eight.

Eleven regattas were held during the 1907/08 season-six by clubs, one each by the Association, Sydney University and St. Ignatius', and the regular Anniversary and Balmain Regattas. The Sydney crew for the champion eights in October, 1907 had a number of changes. Of the previous year's champion eight, only Sid Middleton, Barker and Fitzhardinge were available, although Moesch rowed again. The new men were F. O. Robinson, D. F. Henderson, John Ryrie and J. F. Reid, with Bill Middleton coaching.

Although Leichhardt led most of the way in the race, Sydney kept its form well and drew away to win by 3/4 length, its fifth successive championship. Green again took the sculling championship. Sydney also won the senior fours at University's first regatta, which included the first-ever interfaculty eights, won by Medicine. The same Sydney four of Barker, Middleton, Moesch and Fitzhardinge took the champion fours, rowed at Glebe's regatta in December, Glebe itself being 2 lengths back second. The club won the premiership for 1907/08 once again, University finishing second.

The 1908 interstate race saw NSW successful at last after a lapse of no less than 15 years. The State selectors, McDonald, Fitzhardinge and Ramsay, included Ryrie, Goldie and Fitzhardinge himself in the final crew, while Bill Middleton was coach. The race was rowed in Melbourne, and NSW took the lead off SA at the mile to go on and beat Victoria by 1 1/4 lengths, with Tasmania 3 lengths back third. All six States competed.

John Towns, the NSW sculler, rowed himself to a standstill, the event being won by Jack of Tasmania. After the event, however, Jack's amateur status was called into question. He worked for his father, a boat-builder, but it was claimed he was not paid wages. The winning certificate was withheld while the VRA asked Jack to make a sworn declaration that he was not "employed in or about boats far wages". He was later disqualified.