Oarsmen from New Zealand were seen once again in Australia at this time. The staging of a champion four race within a week of the intercolonial event had been requested by NZ and duly agreed to (the first eight-oared boat in NZ was the George Thornton, bought by the Star Boat Club in 1895, and the first eight-oared event in New Zealand took place in 1896). NZ rules allowed manual labourers to row as amateurs, however: NSW objected to two fishermen who were selected in their crew and they were removed. Victoria again proved too good in the race itself, beating NZ by 2 lengths with NSW, stroked by Pearson, 4 lengths back third. Slack of Queensland easily won a champion sculls of Australia race also staged, beating Bannister of North Shore and a New Zealand sculler.

The Intercolonial Rowing Conference duly met on 20 May, 1896, and it seemed that agreement had been reached. Representatives were present from NSW (Dietrich, the president of the NSWRA, McDermott and Braddon), Queensland, Victoria (including Upward) and New Zealand. There appeared to be general agreement on adopting the 1888 definition as a basis but there was disagreement over an amendment to avoid the 1895 situation recurring.

On the chairman's casting vote, it was finally decided to recommend a further clause stating that an amateur must never have competed in any open competition for a stake, money or entrance fee in any branch of athletics. The conference failed to get around to a New Zealand suggestion that a champion four-oared race be held annually. The VRA went ahead and agreed to the amendment, though running into difficulty with certain clubs which had members who wanted to cycle for cash and still row.

The 1896/97 season commenced in Sydney with the expectation that all intercolonial problems had been resolved. University took the champion eights for the second time, with Glebe finishing second and North Shore third. 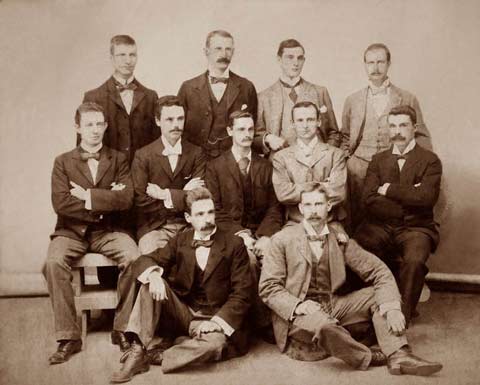 Sydney's regatta was a great success, with the club again securing the open race, this time for maiden eights. Balmain also held an open maiden eight at its regatta in March, 1897 and, after a great battle with North Shore, Sydney won by 1/2 length. In the 6 seat of the Sydney eight was a newcomer to rowing, Mars Cater, who was to have a remarkable career.

Selection now commenced for the intercolonial, with Victoria, Queensland and NSW seemingly prepared to meet under the new definition, and Western Australia, stimulated by the ex-NSW coach Albert Goodyear, likely to compete for the first time. (Goodyear, before leaving Sydney, had managed to embroil St. Ignatius' in one of its very rare disputes with the Association: while hon. secretary of the Association, Goodyear had sold the College a racing boat for £10 and failed to submit the funds to the Association, resulting in considerable unpleasantness all around.) Pearson, "a champion in all respects", was selected for the stroke seat, with club-mates Williams, Kloster, O. H. Baass, Clarrie Smith and Arthur Fitzhardinge, son of M. A. H. Fitzhardinge, also gaining selection. Lou Quist, by now transferred to Sydney, was to be coach.

NSW did not participate in the 1897 intercolonial event, despite its preparations. Victoria decided it would row under the old definition and not the new and this the NSWRA would not accept. A motion was passed that the eight in training "be and is hereby disbanded". With NSW absent for the first time ever, Victoria beat WA in Melbourne by 11/2 lengths, with Queensland 12 lengths back. WA took the sculls race which was also held. The three colonies also held a conference at which Queensland and WA agreed to attempt to abide by any arrangement come to between Victoria and NSW. In NSW, a short-lived "NSW Manual Labour Amateur Rowing Association" came into being and made contact with the VRA about ensuring NSW participation in the intercolonial in future years.

Sydney's senior oarsmen were now at their strongest for many years. At the Association's regatta in October, the club eight, "strong and brilliant", won the champion eights by 4 lengths from Glebe with University 5 lengths back third. The winning crew was Matthew Brownhill (bow), J. W. Houston, Cater, Baass, Smith, Kloster, Fitzhardinge and Pearson (stroke), with Quist cox and coach. At Sydney's own regatta a week later, the club had a good win in the open race on the programme, which was, of course, for senior eights.

Strangely, the club entered no eight for the Gold Cup of March, 1898, which Glebe duly won. With much satisfaction, a large group of SRC members attended a ceremony at the city boatshed a few weeks later when the Association's championship pennant was hoisted by the club for the first time. 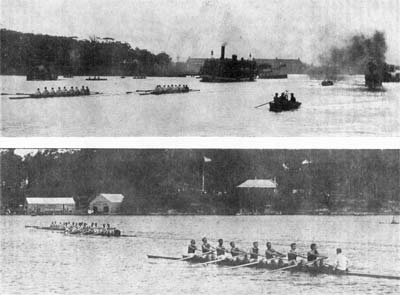 Two scenes from 1898 Champion Eights, won by Sydney from University and Balmain

In view of Sydney's strength, it was most unfortunate that squabbling over the intercolonial contest continued. NSW made it clear that it would only race in Brisbane in 1898 if the event was held under the 1896 conference agreement. The difficulties seemed to lie in the VRA's intention to apply the new clause only from the start of 1897 and to allow those who had competed for cash in other sports before this time to row.

Country clubs in Victoria were also pressing for abandonment of even this restraint. With NSW unlikely to race-and, in fact, considering sending a four to race in the NZ championships instead-members of the Queensland crew became ill and the race was put off till November. The time lapse made no difference, however, and, again without NSW taking part, Victoria beat Queensland by 1/2 length. Only two Queenslanders fought out the "championship sculls", with Slack winning.

Sydney's success on the river continued. The day before the Association's championship regatta in September, 1898, Pearson came down with the measles and Cater was moved to the stroke seat. The crew had a grand battle with University for much of the 21/2 mile course, but managed to draw away at the finish to win by just over a length. Mick Cater earned great praise for his sterling effort (from rowers and also from other interested parties: "the girls went crazy over Cater, and wanted a lock of his hair!").

The championship pennant was thus soon after hoisted for the second successive year over the Sydney Rowing Club. The occasion itself was marked by a pair-oar race and, later on, all present were taken on a trip round the harbour on a steamer. Sydney were strong favourites for the Gold Cup of April, 1899, but Glebe hung on to them well and their finishing spurt left Sydney with no answer. Sydney gained consolation through wins in the maiden and junior fours. They made amends too at their own regatta by again taking the open race, the senior four, from Glebe and Balmain. The Lady Hampden followed two races at the regatta and then landed the visitors at Abbotsford "where afternoon tea was served in good style on the lawn of the club's premises. A good string band provided music, and the outing was a thorough success socially and from a rowing point of view".

Fortunately, the intercolonial dispute was about to come to an end. Victoria and Queensland made strong representations to the NSWRA to rejoin the intercolonial contest, the former, though not prepared to accept the 1896 conference agreement, being willing to see that all crew members were eligible under it. NSW proposed a compromise with the conference definition being accepted as operative from January 1, 1897. This was agreed to.

Sydney's success continued. The 1899 Association championships took place in September and Sydney again took the champion eights, beating Balmain by 2 lengths with Glebe third. "Sydney's form was of the very best, and it is doubtful if anything better has ever been seen on the river." The crew was Brownhill (bow), E. S. Wolfenden, H. A. Smith, Cater, Baass, C. A. Smith, Fitzhardinge and Pearson (stroke). A fortnight later, Sydney also secured the champion fours event at a second Association regatta and came first and third in the champion pairs.

The intercolonial selectors, Blackman, Kennedy and Williams, searched widely but decided only one change would improve the Sydney crew. Wolfenden, the new man, was replaced by Degotardi of Balmain. The race was rowed in Melbourne in November and NSW was beaten. Victoria won the event by 4 lengths from NSW with SA, competing for the first time, 2 lengths further back. Queensland, coached by Steve Fairbairn, was fourth. A long wait by the NSW crew in heavy rain and cold probably affected their performance. J. J. Daley of Mercantile easily beat Slack in the sculling event. 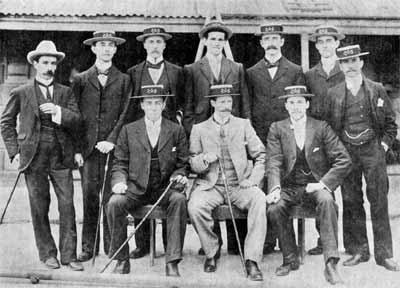 A further conference was held after the race (with Deloitte being among NSW's representatives). NSW formally proposed that the Sydney conference decision of 1896 should have force from January 1, 1897 and Queensland and SA supported the scheme against Victoria's opposition. Location of future races was also decided, with Adelaide being given the 1902 event. All four colonies, including Victoria, adopted the conference resolutions.

The comments of "Trident" (John Blackman) on some of the Sydney men of the 1899 crew are of interest: Brownhill - "a perfect oarsman, rather short in height but thick set, and as good a bow as ever rowed in this Colony"; Cater-"a very powerful man, tall, strong, and expert. He is a very good rower indeed, and has had a brilliant career"; Clarrie Smith - "tall man, and a splendid oarsman of proved quality. He is one of the best men ever seen here, and can cover a course in most effective style"; Fitzhardinge -"tall, strong, and possessed of any amount of stamina. He is perhaps the best oarsman in this colony or any other"; Pearson - "tall, rather slight, very tough, and a most brilliant oarsman, just the right stamp for the position of stroke, as he rows with splendid judgment and has wonderful dash. With a crew that can stand his driving he is all that can be desired". A Victorian newspaper named Cater, at the time of the race, as the "finest oarsman in any of the visiting crews, his work being very clean and with great power".

The decade ended, unfortunately on a disjointed note. Firstly, the rowing career of Arthur Fitzhardinge came to an end when he joined the Bushmen's Contingent to the Boer War (William Cope, Sydney's former captain, also enlisted). Secondly, the St. Ignatius' Regatta for 1900 was abandoned due to "the outbreak of Plague".

Finally, there was internal strife over selection of the intercolonial crew for Brisbane in May, 1900. A new group of selectors, Helsham (University), McGregor (Glebe) and Kelly (Riverview) were appointed. The Sydney crew confidently declared themselves unavailable for selection unless chosen as a complete crew.

The selectors were not agreeable, however, and only Cater was finally persuaded to row. (Almost seventy years later, Cater, in an interview, recalled the pressure placed on him by Deloitte to row in the crew and his agreement on the condition that his fellow crew members gave their permission. Unfortunately, it was announced in the press next day that he would row in the crew, with the condition not being stated. The other members of Sydney's eight, his very good friends, refused to talk to him and, he says, there was even a move to force him out of the club.) Degotardi again made the crew, together with three University men, two from Glebe and one from North Shore.

In the race itself, Victoria was too good again, beating NSW by 3 lengths with Queensland 2 lengths further back and SA bringing up the rear. Slack again won the sculls, easily beating Charles Donald of Victoria with NSW not represented. Victoria had thus won seven intercolonial races in succession since 1894 - although NSW had been absent on two occasions - and the win of 1893 was the only NSW success in the decade.