At that annual meeting Alan Gordon found himself unable to continue as captain and Jim Blair-Holt was appointed in his place. Keith Bilney was elected vice-captain with Dave Palfryman and Alec Clarke continuing as secretary and treasurer.

In this season the Victorian Rowing Association decided on a slightly expanded regatta programme, with a total of seven regatta fixtures, together with Challenge Eight Fours and Pairs (which again replaced the normal Championships for these classes of boat). Mercantile achieved a total of six wins at these regattas, including two Novice Fours and a "C" Class Four. The other wins were in sculling events by Keith Bilney and John Williams who was rapidly making a name for himself as a sculler of considerable promise. A promising debut at this time was that of Harry ("Ox") Duncan, who won both a Novice and "C" Class Four. Despite his somewhat awkward style "Ox" was to make a great contribution to Mercantile, rowing in the club's first post-war winning Senior Eight and achieving Interstate status as a member of Victoria's winning King's Cup crew in 1952.

Another important event for the club was the transfer of Charlie Saleh to Melbourne. This former Sydney, Geelong College and Corio Bay coach was to have a great influence on the post war revival of Mercantile, firstly as a coach in his own right and, secondly, through his influence on oarsmen who later became successful club and Victorian coaches. Included in this category are Herb Shears, Bob Aitken, Jim Ferguson and David Boykett. Albert Bell who achieved much success with Geelong College and Corio Bay in later years was also a coach who learned his rowing under Charlie Saleh. Some notes on rowing style prepared by Charlie are printed in the 1944-45 annual report, and his basic principles could still serve as a model for present day oarsmen.

On the European front, the Allied Armies had achieved victory with the surrender of Germany on May 9, 1945. Many of the club's members who had served in this theatre returned to Australia, including Bill Trickett, Dave Stirling, Frank Raven, Tracey Rowley, Bert Spencer and Norm Kerrigan, all of whom had been German prisoners of war. Members were proud to learn that Flying Officer Arthur Atkins had been awarded the Distinguished Flying Cross, but were saddened to hear of the death on active service of Gordon Davies and Bill Matheson.

With returning servicemen and a further influx of new recruits, effective membership had risen to 141 and the year's accounts showed a surplus of £155. 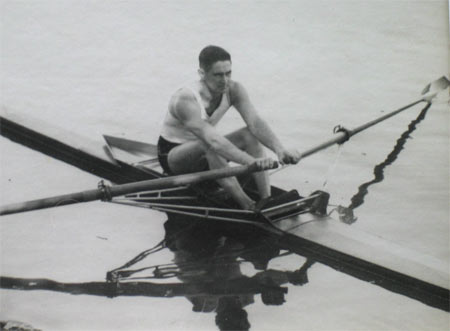 As the war years neared their close, it was a matter of pride to the members that the doors of Mercantile had always remained open and that, despite the drop in membership to as low as 94, the returning servicemen still had a club to return to. Thanks to the small band of enthusiasts who for reasons of age, health and occupation, were unable to enlist in the forces, the clubhouse was in reasonable condition. Despite the substantial reduction in income over the six year period, the club's finances were also in good condition. The overdraft of £366 existing in 1939 had been extinguished and Mercantile held War Bonds to the extent of £500 with a credit bank balance of £42.

The situation of the club's fleet was another matter. New boats had been unobtainable for six years and repairs had been kept to a minimum, both for reasons of finance and from the inability to obtain skilled labour for the work involved. The majority of the racing fleet had been placed under canvas during the war years, and with the exception of two boats which had been converted to swivels in 1942, the entire fleet was poppet rigged. In November of 1944 it had been possible to obtain a new set of poppet oars from George Towns and Sons, these being purchased at the then unheard of price of £4.10.0 each. Members were horrified at a quote for a new racing eight of £190 plus sales tax, with delivery of the boat being several years away. There was no alternative but to make do with the existing antiquated equipment and, on a makeshift basis the fleet was gradually restored and re-commissioned. It was not possible to purchase a new boat until 1948.

In the 1945-46 season Jim Blair-Holt was again captain, with Jack Clark and Hugh Clarke being vice-captains at various stages of the year. Dave Palfreyman was re-appointed secretary, but for business reasons was compelled to resign to be succeeded by Alan Gordon and subsequently Norm Cairnes.

The war against the Japanese continued as the season started, but with the Allied tactics of "island hopping", the Japanese conquests in the Pacific were slowly being recovered. By the capture of air bases, it was possible for the giant American aircraft to bomb the Japanese home islands and the invasion of Japan itself was planned for March of 1946. The timetable was changed dramatically when on August 6, 1945, the American B-29 bomber "Enola Gay" flew into immortality by dropping the world's first atom bomb on the city of Hiroshima. Three days later a second bomb was dropped on Nagasaki and on August 10 peace negotiations were opened by the Japanese with the Allied forces. On September 2, 1945, Japan signed an unconditional surrender and just six years after it had started the Second World War was over.

The cost of this world wide conflict was almost impossible to calculate either in terms of lives, money or human suffering. Certainly, by any estimate, the casualties of 1939-45 were many times those of the 1914-18 war. Mercantile also was more severely affected and enlistments of club members totalled 187, of whom 25 of this number failed to return.

The names of those killed are listed on a second Honour Board in the clubhouse, while the names of all Mercantile members who served in the forces are inscribed in a Book of Remembrance in the meticulous printing of Mrs. Norman Cairnes. On each Anzac Day the names of the members who died in both World Wars are read out by the president as a reminder of their service and sacrifice.

Following victory in the Pacific, the Victorian Rowing Association decided to resume as complete a regatta programme as possible during 1945-46. It was not practicable to conduct Henley and open events replaced the Championships for Senior Eights, Senior Pairs and Lightweight Eights but the Interstate Eights and Sculls were resumed at Penrith, New South Wales in 1946. Only one Premiership was conducted, with this being awarded to the club winning the most points in all events.

Coached by Charlie Saleh and comprising former Geelong College oarsmen, Mercantile opened the season with a win in the Novice Fours at the Metropolitan Regatta. With seven entries at the Melbourne Regatta, the club was successful only in the Maiden Fours. This was followed by a treble at the December Metropolitan Regatta when Mercantile's three entries won the Maiden Eights, Lightweight Maiden Eights and Maiden Sculls. Of the club's two entries at Nagambie, the Maiden Four stroked by John Williams, was victorious and this was followed by three wins at the Upper Yarra Regatta when the Junior Four, Maiden Four and Lightweight Maiden Eight were successful.

At a second Melbourne Regatta held in February, 1946, the Maiden Eight which had won at the December Metropolitan Regatta, won the Junior Eights comfortably. A Maiden Eight was also successful at this regatta. At Barwon the crew which had started the year as a Maiden Eight went one stage further in winning the Open Eights. A Lightweight Maiden Four, comprising four coxswains of pre-war years in Jack and Bill Shears, Barry Johnson and Bill Morrison also was successful in winning its event.

In the Championships, held on the Lower Yarra in March, the club's Open Eight was unable to repeat their Barwon success over the 2 1/2 mile course. However, in the Lightweight event, rowed over 1 1/2 miles, Mercantile won comfortably with Jack Shears in the stroke seat and Jack South as coach. 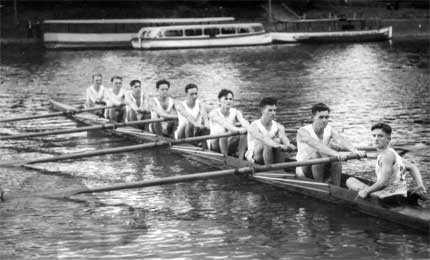 With Bairnsdale and Sale as the final regattas, Mercantile still had hopes of winning the first post-war Premiership. On the Saturday the Lightweight Maiden Four and Pair were both successful, but despite a win by the Maiden Eight and Lightweight Maiden Pair at the Sale Regatta (which was in fact rowed at Bairnsdale), the club lost the Premiership by four points to Melbourne. The win by the Maiden Eight at the Sale Regatta was the third by different crews in this category for the season and indicated the depth of the club's recruiting in the immediate post-war period. It also marked the first win for Mercantile by Bob Aitken, a former Geelong College oarsman who stroked the Mercantile crew and who was destined to make his mark on club, Victorian and Australian rowing as an oarsman, coach and administrator.

The Victorian Interstate Eight was stroked by Wal Lambert of Richmond and coached by Ray Todd. This crew comprised a mixture of experienced oarsmen and men who had not competed in pre-war years. In an exciting race on the Nepean, Victoria was successful from New South Wales and won the King's Cup for the first time since 1932. To the great pride of his father, Alec Clarke, Hugh Clarke represented Mercantile in the four seat of the Victorian Eight. In the Interstate Sculling Championship held on the same day Merv Wood won on a row-over, with Ron Rawlins from Victoria the only other entry being unable to start due to illness. This was the first of Wood's eight Australian Sculling titles in an illustrious career, during which he competed at three successive Olympic Games, winning a gold, silver and bronze medal. In addition, Merv Wood won the World Amateur Sculling Championship and held this title for a number of years. He also won several gold medals at the Commonwealth and Empire Games.

By the end of the 1945-46 season, Mercantile membership had risen to 194 and with the promise shown by so many of the younger recruits during the year, the club was looking forward to quick success in Senior ranks and adding to the many Premiership Certificates which then adorned the wall of the clubhouse.

Social activities had revived during the year with a Victory Dinner in the clubhouse on December 1, 1945, as a welcome home to returning servicemen. The first club dance for several years was held at the Palms (now called the Dorchester) and was a great success, both socially and financially. Club racing and time trials had been resumed. After seven years of war time interruption Mercantile was slowly returning to normal.