Under the almost imminent threat of war in Europe, the 1939 annual meeting of the club was held on July 22, 1939, with Stonk Ross again being appointed captain. Promising junior oarsman, Geoff Hastie, was elected vice-captain and Sam Newport and Alec Clarke continued as secretary and treasurer. The former was in his third year and the latter entering his twenty-fifth year of office. As usual, seven members were elected to the committee, little realising that before the end of the season no less than 13 persons would fill these positions on various occasions.

Prompted by the success of the previous year, crews for the 1939 Melbourne and Henley Regattas were selected in August and started weekend training later that month. None of these crews were to complete their preparation and few of their numbers were available to compete at the opening regattas.

In late August, Hitler made another "last territorial claim" and ordered Poland to hand over a strip of territory across the Polish Corridor to link Germany proper with East Prussia. Convinced that the policy of appeasement with Hitler had failed and that he intended to conquer all of Europe, Britain and France announced that they would support Poland in the event of a German attack.

With the advantage of a non-aggression pact with Russia, which had also made a secret agreement to divide Poland with the Germans after the conquest, Hitler invaded Poland at dawn on September 1, 1939. Britain and France ordered Germany to withdraw, warning that if they refused they would declare war on Germany. Hitler paid no attention and on September 3, Britain and France announced they were at war with Germany.

As Hitler's armies invaded Poland it was Friday evening Melbourne time and the members of Mercantile, together with the rest of Melbourne and, indeed, the world, clung to the hope that reason would prevail and that the German forces would be withdrawn. By Sunday morning this faint hope was diminishing and the club's crews in training for the season's first regattas were in some doubt as to whether it was worthwhile taking to the water. By that night Britain would probably be at war with Germany, and with many of Mercantile's active oarsmen committed to immediate enlistment, perseverance with rowing training appeared pointless. The majority of crews however, took the view that their Sunday training would possibly be their last together and most crews trained as usual. Their pessimism was well founded with the news on Sunday evening that as the German forces had failed to withdraw from Poland, Britain and France were at war with Germany. This was immediately followed by a similar declaration on behalf of Australia by Prime Minister Menzies and the Peace of 1918-1939, following the "war to end all wars" was at an end.

In this history of Mercantile, it is not possible to cover in any detail the global conflict which followed. This chapter will, therefore, be confined to the effect on the Club of the Second World War and, in particular, Mercantile's struggle for survival during the six years that followed.

As anticipated, enlistments by Mercantile members commenced immediately and by the end of 1939-40 nearly one-third of the club's members had joined the various branches of the Services. In the years that followed 187 Mercantile members served in various theatres of war, with the club being represented in all areas in which the Australian forces operated.

Once again it fell to the club's older members to keep the doors of Mercantile open and try to boat crews in the limited competitive rowing that was conducted from 1939 to 1945. In this they were assisted by the younger members who had not reached enlistment age or were awaiting their "call-up". In addition, members on leave from the services and those whose health or occupation precluded them from enlistment, played their part where possible.

During the days of the "phoney war" which lasted until the German invasion of Denmark, Norway and the Netherlands in May 1940, the Victorian Rowing Association carried on a normal regatta and championship season for 1939-40. Senior and Junior Premierships were conducted but the Interstate Championships were abandoned for the duration of the war.

Mercantile was represented only in the Champion Fours in the Senior titles, having found it impossible to boat a crew for the Champion Eights. This latter event was won by a young Footscray City crew, which scored that club's first win in that event. In the Champion Junior Eights, Mercantile could only finish third to Footscray City and Banks, but the club was unfortunate to lose the Champion Lightweight Eights. Rowing splendidly, this crew passed the finishing line first but the umpire announced that owing to interference by a ferry boat with two of the crews, a re-row had been ordered. As Mercantile had rowed a considerable distance after these two crews stopped rowing, this told on it in the re-row when it was defeated by Melbourne and Preston. Herb Shears, who was having his first Championship race, in the three seat of the Mercantile crew, has retains an allergy to ferry boats some 40 years later. Deane Morgan who rowed in the five seat is similarly affected. 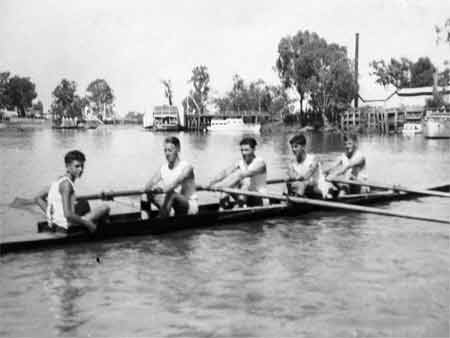 Despite last minute replacements as members joined the services or were unable to obtain leave, Mercantile was represented at all regattas held throughout the year. At Henley, the club won heats of Senior Fours, Junior, Maiden and Lightweight Eights, but failed in the final of each of these events. At the Melbourne regatta the Maiden Eight stroked by Jack Mitchell, scored a good win. It was not until Barwon Regatta that the club achieved any further success for the year, with a win in the Junior Pair. Mercantile's only other wins for 1939-40 were a Maiden Four and Lightweight Four at the Mildura Easter Regatta. Albert Park won the Senior Premiership in 1939-40 this being the last held for six years with Mercantile failing to score any points in this Division. With only three wins in Junior and Maiden races, the club finished well down the list in the pennant won by Footscray City. 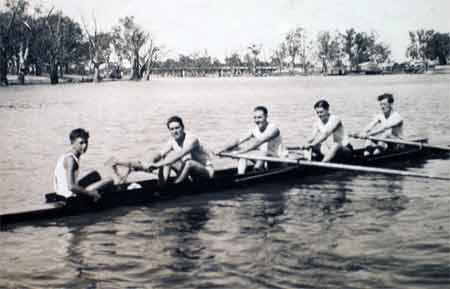 During the year Mercantile suffered its first service casualty when former club secretary, Air Cadet S. C. (Bill) Macrae, died as a result of a flying accident while training at Point Cook. Another death during the year was that of F. S. Gibbs, an early captain of the club and a contemporary of the late Alex Sloan and Sir Stephen Morell; he did splendid work in building up the club from small beginnings and with his passing another link was severed with the formative years of Mercantile.

By June 1940 France had surrendered and Britain stood alone against the might of the Third Reich until Hitler's invasion of Russia in June 1941. Prior to the 1940-41 season the Victorian Rowing Association had decided on an extremely modified programe. The Premierships and all Championship events were abolished and only a limited number of regattas were held. At the first of these, in November, 1940, Mercantile won both the Novice Fours and Lightweight Novice Fours. These crews were stroked by Hugh Clarke and Herb Shears respectively, both of whom subsequently served as pilots in the R.A.A.F. and rendered the club great service in the post war years. The only other wins by Mercantile during the remainder of the limited regatta season were by Lightweight Fours, which were successful at a V.R.A. "Special Regatta" and also at Mildura.

It was during this season that the Sprigg Time Trial distance was reduced from its traditional seven miles (from the club house to the mouth of the Maribyrnong and back), to a 4 1/2 mile course, around Como Island. This distance time trial had been introduced in 1934 for club competition. Over the years conditions for composition of the crews have varied, but normally crews must comprise at least two novice oarsmen. After the war the seven mile distance was restored but was later again reduced to the dock-head and back (approximately five miles). In more recent years the Como Island course has been reintroduced. The Sprigg Time Trial has long been a popular event with Mercantile oarsmen, with Jim Sprigg's speech on the presentation of his trophies being the highlight of the club's annual meeting. In the 1940's 12 or more crews competed annually, with experts such as the Shears brothers, spending much time studying weather maps and tide times to obtain the most favourable conditions. It is a matter of regret that present day oarsmen appear to have lost enthusiasm for this traditional Mercantile event.