In the 1937-38 season, Norm Cairnes succeeded Jack Bailey as captain, with Phil Braddock and later Clive Ward becoming vice-captain. Sam Newport was secretary for the second year and as had been the case since 1917, Alec Clarke continued as treasurer. With Phil Braddock in the stroke seat and Bill Green as coach, the Senior Eight was defeated in the opening regattas. The club's only success at the Melbourne and Henley double was a fine win in the Maiden Four at Henley by a crew which included two well known present day members in Deane Morgan and Arthur Atkins. 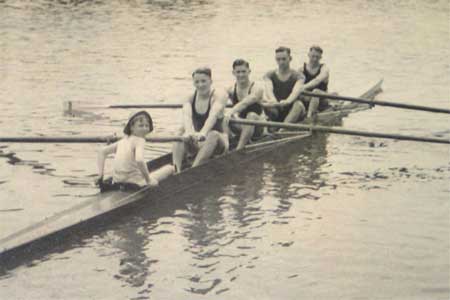 1937 Maiden Four Winners at Henley on the Yarra

The only win at Nagambie was by the Lightweight Maiden Four, giving John Robertson the first of his many wins for Mercantile. At Rutherglen, this crew completed the double, with wins also coming to the Senior Eight and Maiden Eight. The merit of the Senior Eight's victory is doubtful as it appears to have been largely due to the willingness of local oarsmen to boat a scratch crew in order to make a race for Mercantile.

With Stonk Ross as stroke and several other changes, the Senior Eight was unable to repeat their Rutherglen success at Upper Yarra, but at the Australia Day holiday regatta it dead-heated in the final with Richmond and won the re-row by six inches. The Mercantile Lightweight Eight was successful in winning a double at both of these regattas.

In the Champion Eights, Mercantile could finish in only third place to Albert Park and Corio Bay. The latter club, with Charlie Saleh as coach, was fast becoming a force in Victorian rowing and later in the season scored that club's second successive win in the Champion Junior Eights. With the exception of the Champion Senior Pairs and Sculls, Mercantile was represented in all State titles held during the season, but for the second successive year failed to win any of these events.

For the rest of the 1937-38 season, the club's only other victories were a Maiden Four at Barwon and a double in both the Junior and Lightweight Maiden Fours at Bairnsdale and Sale. These victories at the Easter regattas enabled the club to win the Junior Premiership for the second successive year by only four points from Melbourne. Once more this pennant was largely the result of the success of Mercantile's Lightweight oarsmen.

In the Senior Division, the club had only two wins and was third to Albert Park and Richmond.

In February of 1938 the Empire Games were held in Sydney, with rowing then being one of the major sports at these Games. Australia was represented in both the eights and fours and although defeated by England in the eights, the four (which included two Albert Park oarsmen) recorded a fine win from Canada and New Zealand. For the first time Australia had won a gold medal in international competition.

In the Victorian crew for the King's Cup held in Melbourne, Mercantile's representatives were George Anderson in the five seat and Stonk Ross as emergency. The race was won by Western Australia from New South Wales, with Victoria in fourth position.

It was during this season that the death occurred of the great Alex Sloan, whose career and contribution to the successes of Mercantile has been previously covered in this history. Alex Sloan had suffered illhealth for some years and he had been compelled to retire from coaching several years previously, his last important success being the coach of the Victorian crew which won the King's Cup at Manmum in 1930. There have been few, if any, members of Mercantile to whom the club owes more than Alex Sloan. 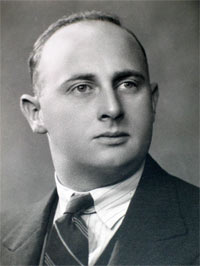 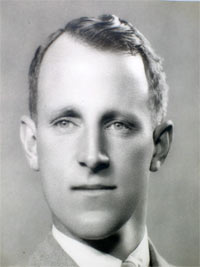 Stonk Ross was appointed captain for the 1938-39 season and Frank Raven became vice-captain. Sam Newport and Alec Clarke continued as secretary and treasurer respectively. After its success during the previous two years in Junior ranks the club was determined to annex a senior pennant for the first time since 1929-30.

After a short spell during the previous year, Jack Bailey again returned to the stroke seat of the Senior Eight. Since the retirement of Alex Sloan after the 1930-31 season, the Mercantile Senior Eight had been under no less than eight different coaches, and for 1938-39 Doc Cooper was reluctantly persuaded to take control.

The only member of the crew new to Senior ranks was Pat Black, with all others having achieved Senior success in previous years. Under the guidance of Doc Cooper, the dedication of this crew was outstanding, with many miles of pre-season training in company with the club's excellent Lightweight Eight coached by Bill Green.

At the Melbourne Regatta, the Senior Eight won both its heat and final without difficulty. At Henley it met the formidable Haberfield combination, which at that stage dominated New South Wales rowing.

It had been five years since a Victorian crew had won the Grand Challenge Cup, but after a comfortable win in its heat, Mercantile defeated Haberfield and Albert Park in a memorable race in the final. As a result of their constant training with the Senior Eight, the club's Lightweight eight, coached by Bill Green also achieved a comfortable double victory at the Melbourne and Henley Regattas. 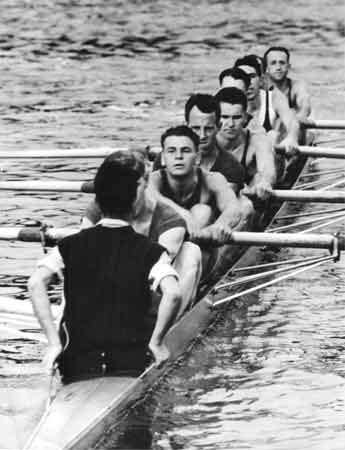 1938 Senior Eight Winners at Henley on the Yarra

After defeat in the Champion Fours in December, the club was well represented at the Christmas treble and was victorious in the Lightweight Maiden Pairs at Nagambie and the Senior and Junior Fours at Rutherglen.

In the Senior Four at Rutherglen, Finlay Macrae rowed bow in the Mercantile crew and thus achieved his only regatta win. He became the third of the Macrae brothers to record a win for the club.

With one change, the Senior Eight which had been successful earlier in the season, again won at the Upper Yarra Regatta, but was defeated on the Australia Day holiday by Richmond. No other wins were recorded by the club over these two regattas, but in the bow seat of the defeated Maiden Pair was Ted Shears who became the first of four brothers to row for Mercantile and part of the family that was to contribute so much to the rebuilding of Mercantile's rowing in the latter part of the 1940's.

With Pat Black again in the three seat in place of Colin Campbell, the Mercantile crew were narrowly defeated by Richmond in the Champion Eight in mid-February 1939. The crew's only two losses for the season were avenged by a double victory at Barwon and Ballarat, giving the crew five wins from seven starts for the year. With 52 points Mercantile achieved its pre-season objective of a Senior Premiership for the first time in nine years. 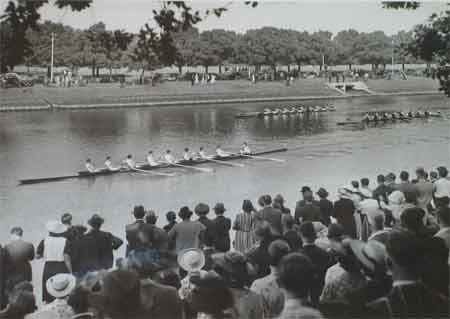 1939 Senior Eight Winning the Gilby Cup at the VRA Regatta

For the Junior pennant, the club's only successes for the remainder of the year were a Maiden Eight at Barwon (in which Lawrie Moll achieved his first success) and a Lightweight Four at Bairnsdale. Mercantile was defeated by Corio Bay in the Champion Junior Eight (with that club recording its third successive in this title) and was third in the Champion Lightweight Eights to Albert Park and Corio Bay. With six wins in the Junior Division the club could finish only fifth in this division, which was won by Banks.

For the Victorian Interstate Eight, rowed in Brisbane, Beef Calder and Stonk Ross were selected. After a magnificent race in which Victoria led for most of the distance, Queensland snatched the lead in the last quarter mile of the three mile event to defeat Victoria by half a length. Unfortunately, Victoria was subsequently disqualified for passing inside a buoy over the closing stages.

It was a great disappointment to Mercantile that Jack Bailey, in his final year of competitive rowing for the club, did not gain selection for the 1939 Victorian crew. He had rowed in the two seat of the Victorian crew at Mannum in 1930, and subsequently had achieved numerous Senior wins for the club, with the majority of these being in the stroke seat. The 1938/39 season was the culmination of his great career.

The 1939 Victorian crew was, in fact, stroked by a promising young Richmond oarsmen Wal Lambert, who after the Second World War was to stroke two winning Victorian King's Cup crews, achieve Olympic selection for London in 1948 and represent Australia on two other occasions.

Mercantile won the 1938/39 Senior Premiership by 16 points from Richmond and, with a promising number of junior oarsmen coming up, was confident of similar success during the following season. Membership stood at 236 and despite the purchase of two new boats during the year, the club's finances were in a strong position. The boathouse was valued in the club's balance sheet at £2,482, with boats and oars representing £690. After allowing for an overdraft of £367, the club's capital was £2,780.

On the social side, 70 members attended the 1938 annual dinner at the Victoria, while the annual ball on Boat Race Night was well supported. To celebrate its successful season, the club's Senior Eight tendered a complimentary dinner to its coach, Doc Cooper, attended by all members of the crew.

Another event of note during the season was the formation of the Old Oarsmen's Association, the objects of this body being to retain the interest in rowing men after completion of their competitive career and to give encouragement and support to active oarsmen. Arch Dobbie was the Association's first president and it is interesting to note that of the participants in the foundation meeting, Tom Rodda, Noel Wilkinson, Charlie Boxhall, Ray Todd and Ron Marsh still maintain an active interest in the sport. In the intervening forty years, the Association has done much to maintain the objectives for which it was founded and has made generous donations to Victorian and Australian representative crews.

Unfortunately, the 1938/39 season was to see the last peace time rowing for five years. The year had been marked by a series of crises in Europe, commencing with Hitler's annexation of the Sudetenland from Czechoslovakia in September of 1938. In April 1939, Hitler's armies occupied the remainder of Czechoslovakia and in the same month, Italy invaded Albania. The stage was set for the outbreak of the Second World War some four months later.