During the 1934-35 season, the committee called for designs for a new club badge and from a large number of designs submitted by students of the Workingmen's College (now the Royal Melbourne Institute of Technology), selected the present distinctive emblem of Mercantile. Affectionately known as "the drunken dolphins", it consists of a conventional chevron pattern, indicative of water, on a pointed shield suggestive of the prow of a boat. Two heraldic dolphins with eight fins to represent an eight-oared boat are entwined about a trident giving the suggestion of unity and strength. Two crossed oars in the background complete the design. 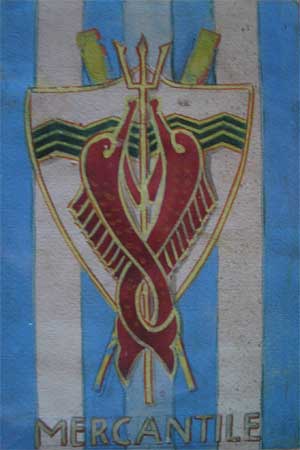 The submission which won the design as the new Club emblem

Although unsuccessful in Championship rowing during 1934-35, the club was represented in all State titles with the exception of the sculls. With 13 wins including four Senior events, Mercantile again was lifting itself to become a major force in Victorian rowing.

As the 1935-36 season started, Frank Raven replaced Bob Gregg as captain, with Roy Thursfield and subsequently Norm Cairnes being vice-captain during the year. A new air of optimism swept the club with a revival of enthusiasm and keenness, which was reflected in regatta performances. Jack Bailey was again stroke of the Senior Eight at the opening regattas, with Jim Macfarlane and Fred Shore as joint coaches. This crew was defeated at the Melbourne and Henley double in November, but there was some compensation in a double win by the Junior Eight and success by the No. 1 Maiden Four at the Melbourne Regatta.

At the Christmas regattas, which had now become a treble with the inclusion of Shepparton, the club won the Junior Fours at both Shepparton and Rutherglen.

With Tom Luxton replacing Jack Bailey as stroke and several other crew changes, the Senior Eight failed at both Footscray and Upper Yarra Regattas over the January holiday weekend. At these regattas however, Mercantile recorded its first ever success in Lightweight Eights, when the club's entry, coached by Jack South, won on both occasions.

In the Champion Eight, held in mid-February, the Mercantile entry, which comprised the same crew as that defeated in the Footscray and Australia Day Regattas of two weeks previously, excelled themselves to win from a field of four by a two length margin. Due to Tom Luxton's selection as stroke of the Victorian Interstate Eight, it was necessary for Doug Brooke to replace him in the Mercantile crew for the Barwon and Ballarat double and the crew met defeat both times. The only success recorded by the club at these regattas was by the No. 1 Maiden Eight, which defeated a field of 11 crews at Ballarat. This success marked the first wins for Mercantile by two oarsmen who were to contribute so much to the club in the future, Deane Morgan and Don (Beef) Calder. 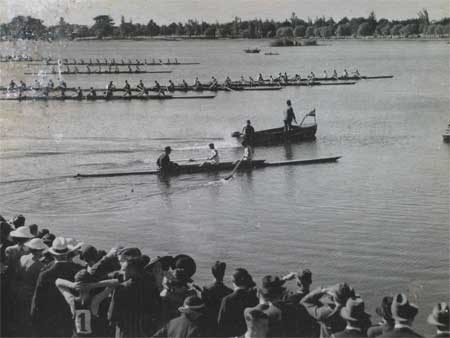 The club was represented in all State Championships held during the season, but apart from its Champion Eight victory, the only other success was that of Maurie Hansen in the 2,000 metre Sculling Championship. In the Champion Fours however, Mercantile finished third and the Champion Junior Eight finished a good second to Richmond. The crew for the Champion Fours was stroked by Doug Brooke with Norm Cairnes in the bow seat. Forty years later those two oarsmen still combine for an enjoyable Sunday morning row.

With Bairnsdale and Sale as the final regattas for the year, the club was represented at both fixtures by three crews, its only success being a good win by the Maiden Eight at Sale. Again the club was not successful in either Premiership, finishing third in the Senior Division and second for the Junior flag. Both of these pennants were won by Richmond, who thus became the third club in Victorian rowing to achieve the distinction of a double Premiership. In recognition of this feat, Mercantile members entertained the winning Richmond crews at a smoke night.

During the season, the club implemented a five year plan for improvements to the clubhouse. The first stage of this plan involved the extension of rear of the clubhouse by 10 feet to include a gymnasium, new lavatories and a shower room and for the first time the luxury of hot water. The cost of this work was £569, with the funds being raised by a bank overdraft, which was guaranteed by six of the club's members. Future stages of this plan were to include carrying the upper floor over the wings for the length of the building and a room in the "south west corner", which was to be fitted as a lounge for the comfort of members. Unfortunately, these later stages were not pursued as part of the then clubhouse. It required two subsequent rebuilding programmes and a major fire, before the objectives of a complete two storey building and comfortable conditions for the consumption of refreshments were achieved.

It was during Frank Raven's term as captain that an unfortunate incident occurred, which for the second time in the club's history resulted in publicity through the press to the detriment of the club. This resulted from two senior oarsmen persisting in using the club's best racing pair for pleasure rowing, despite a request by the captain that they not use this particular boat. The two members concerned claimed it was their right to row in the best boat available and despite the remonstration of Frank Raven, they disregarded his authority and repeated their action on several occasions. The club committee upheld the authority of the captain. The two members were called before the committee and informed that their action was detrimental to the club and would not be tolerated. The members maintained their stand and refused to accept the captain's ruling. Frank Raven was at that time employed by the Melbourne City Council. Unfortunately the affair reached such proportions that considerable pressure was brought to bear on him by several Councillors to back down. In addition, the Sporting Globe, through the agency of Hec de Lacy, one of its more sensational journalists, took up the story and wrote some unfortunate comments about Mercantile and its captain. At one stage a court action was contemplated by the club to refute these unfair allegations. Subsequently, a further committee meeting was called and on that occasion a more conciliatory attitude was adopted with the two members apologising for their actions. It is interesting to note however, that neither of the individuals competed for the club again and shortly afterwards resigned their membership.

As the 1935-36 season closed, membership had increased to 234 following the election of 83 new members during the season. This figure constituted a record and Mercantile membership was claimed to be the largest of any rowing club in the Commonwealth.

It is interesting to reflect on the type of members of that era, and in particular their participation in the life of Mercantile. As a cross section of the Melbourne community, the youth of the club in the late 1930's was very similar to the younger members of Mercantile of the present day.

Despite the fact that effects of the Great Depression were being alleviated, one in 10 of the Australian workforce was still jobless and the member with a secure and permanent position was still considered fortunate. Even more fortunate were the members who possessed or had access to a motor vehicle.

As a consequence of this, most members spent a great deal of their leisure time in and about the club or in the company of their clubmates. During the winter months, Sunday morning scratch rowing was a feature of club life and it was not unusual for the entire practice fleet to be used for this purpose, with impromptu races down the Henley straight. There was also a series of club and combination races in pairs and eights on many Saturday afternoons between regatta seasons, with these attracting as many as 20 crews. Another feature of Saturday rowing during the winter months was the organisation of scratch eights, who rowed up to the Twickenham Oval for a friendly game of football and then rowed back to the clubhouse, having a hot shower and then off to the House of Cass for refreshments. To gain an advantage in the race back to the club, it was not unusual for a member of one of the crews to sneak down to the moored eights while the football was in progress and change the stroke side oars with those of bow side of the opposition boats. Another method of gaining an advantage in the row home was to tie a tin can behind the craft of the opposing crews.

Another feature of the club of that era was the annual trip to Flemington for the Melbourne Cup. This usually consisted of several eights which rowed to Footscray Rowing Club, where they left their boats, and viewed and wagered on the Cup from the Flat - where the entry fee was two shillings per head. Again this was followed by a race back to Mercantile where the first crew home had the advantage of the hottest showers and a larger share of the refreshments that followed.

As ever, the "south west corner" on a Sunday morning or after a regatta, was an integral part of the club. In those days however, drinkers did not have the advantage of the present cool room, temprite and modern extraction equipment to add to the quality of their beer. Barrels of beer, then obtained from Richmond Brewery with the assistance of Mick Williams, simply were stored in the local cool store until required for consumption.

On their arrival at the clubhouse they were placed on the workbench and tapped with a wooden tap with the assistance of a mallet wielded by the most competent drinker available. Several times tragedy struck, with the wooden tap splitting, which doused with beer not only the member performing the rite but also the bystanders (always ready to give advice on such occasions). It normally wasted several gallons of the precious fluid before a replacement tap could be found.