It has long been a catch phrase of world economics that "when the U.S.A. sneezes, the rest of the world catches cold". This was never better exemplified than in the depression of the 1930's. The United States sneezed most violently in late October 1929, when the American public appeared to realise almost simultaneously that the price of shares had become grossly inflated. This had resulted from the boom times of the preceding years and was precipitated by the entry of "amateur" investors into the scramble for quick fortunes. Overnight the price of stocks plummeted and in the days that followed investors both large and small, saw their fortunes and savings wiped out. Major companies became bankrupt and the confidence of the United States and the rest of the world suffered a blow, from which it took almost a decade to completely recover.

Certainly the crash of Wall Street was not the only cause of the Great Depression, with inflation and increasingly high unemployment in Europe being other contributing factors. However, by the early 1930's effects were world wide and the catastrophic collapse of world prices for farm produce and other exports set off a chain reaction so violent that no Australian industry escaped damage, with virtually the whole of the nation's population suffering its effects. By 1932 one-third of the Australian workforce was unemployed, with the majority depending on Government relief or "the dole" for their existence. Even having regard to the low level of wages of the time, "the dole" was by no means as generous as today's unemployment benefits and barely enabled a man and his family to sustain existence.

For older Australians, the Depression is still a nightmare memory; the time when solid hard working Australians long accustomed to comfortable living and security, suddenly and through no fault of their own found themselves jobless with their families hungry and existing on the bare necessities of life. Young men without dependents rolled their swags and went to the country or interstate looking for non-existent work. Retrenched white collar workers and their families endured poverty and deprivation in the privacy of their suburban homes.

It was the background of the era that marked the entry of the club into the second half century of its existence and quickly relegated to obscurity the memories of the great 1929-30 season. All Mercantile members with the ability to do so, were asked to co-operate in helping obtain employment for less fortunate club members, who were thankful for one or two days work a week. Considering the then subscription of £3.3.0 per year, it was natural that a decrease in membership should occur, but the loyalty of members to Mercantile was indicated by the limitation of this decrease, despite the strained circumstances of so many of the club's members.

Roy Shannon again was appointed captain at the start of the 1930-31 season, but was forced to retire for business reasons in December of 1930, Jim Sprigg being appointed in his stead. Alec (Streak) Miller became vice-captain, replacing Doug Brooke and Frank Raven was appointed secretary: Alec Clarke, as usual continued as treasurer to guide the finances of the club in the difficult years which were to follow.

The season started with the Melbourne regatta, which for the first time replaced Henley as the opening regatta of the season. Henley as the premier regatta of the year was held a week later. The club entered 10 crews for the Melbourne Regatta and had six entries at Henley. The Senior Eight, now stroked by Jack Bailey following the retirement of Cecil McKay, was successful on both occasions, with a Senior Four, Junior Pair and Maiden Eight being victorious at the Melbourne Regatta only. It is interesting to note that this Maiden Eight was in fact the Club's No. 2 crew, and included Norm Cairnes as its bow man. 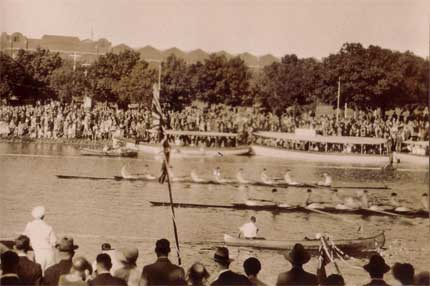 1931 Senior Eight win at Henley on the Yarra

At the Christmas regattas, the club was well represented and won the double Maiden Eight together with a Maiden Four at Nagambie. The January holiday weekend regattas had become the Upper Yarra and Footscray Regattas and with 13 crews entered at the former, Mercantile was successful in Junior Eights. Success at Footscray was confined to the Senior Four stroked by Jack Bailey and coached by Alex Sloan.

The Senior Eight was disappointingly defeated at the Barwon Regatta, the only success at this regatta being in the Maiden Pairs. At Ballarat the Senior Eight made amends by winning its event but was Mercantile's only successful crew at this regatta from 12 entries. Following this success, hopes were held for a victory in the Champion Eights but the club had to be content with third place behind Richmond and consequently finished third in the Senior Premiership to Albert Park and Richmond.

For the Junior Premiership, the result again depended on the results of the Easter Regattas with Mercantile being closely pressed by the Footscray City Club for this pennant.

However, with a double in both the Junior and Maiden pairs, Mercantile won its second successive Junior Division flag.

With only one Premiership and no wins in the various Championship events, the club had failed to match its record of the previous season. However, entries at each regatta had been excellent, with at least one win being recorded at every regatta at which the club was represented. Other satisfactory features of the year were the record entry of 25 crews in the Morell Combination Eights and good attendances at the annual ball and the club dance held on Boat Race Night. Both of these events were held at the Melbourne Town Hall.

Due to the economic circumstances of the time, the Australian Rowing Council voted to cancel the Interstate Championships for 1931.

With the exception of Alec Clarke, there was a complete change in the club executive for the 1931-32 season. "Streak" Miller was appointed captain, Max Bailey became vice-captain and Ridley Soward secretary.

Jack Bailey stroked the Senior Eight for the Melbourne and Henley Regattas, but the crew now was coached by Jim Macfarlane, due to the ill-health of Alex Sloan. Apart from the stroke man, there was only one other change from the great Champion Eight of 1930, with Ron Bolton, formerly of Ireland, replacing Wally Ricketts in the two seat. This crew opened the season with a double win at the Melbourne and Henley Regattas, and the Junior Eight, stroked by Peter Radich and coached by Wally Ricketts also recorded success at both of these regattas. 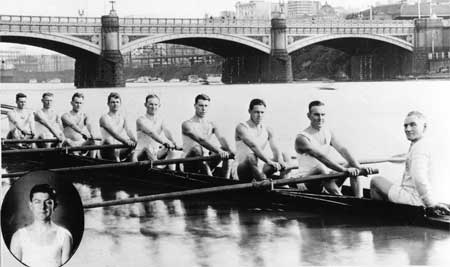 Following the defeat of the club's entry in the Champion Fours in December Mercantile had a dismal period over the Christmas Regattas with none of the club's entries being victorious. The only success at the Upper Yarra and Footscray double was by a Maiden Four, stroked by Max Bailey, at the latter fixture.

For the Champion Eights, held in February, several changes were made to the crew which had achieved success earlier in the season, with "Streak" Miller and Alan Gibbs going into the bow and four seats respectively.

However, Mercantile could manage only third place behind Albert Park, which recorded its first win in this event since 1914-15.

At Barwon and Ballarat Regattas, the Senior Eight again was defeated and despite a win by the Senior Pairs at Ballarat, Mercantile finished third in the Senior Premiership to Albert Park and Richmond. With wins in the Junior Eights and Junior Pairs at Barwon, the club had hopes of repeating its success of the previous two years in the Junior Division, however the Junior Eight was swamped at Ballarat due to rough water while in a winning position. Despite success by the club in the Champion Junior Eights in April, Mercantile was defeated for this pennant by only four points by Footscray City.

Due to the state of the economy and consequent poor entries, the Easter Regattas at Bairnsdale and Sale were abandoned. However, the Australian Rowing Council decided to assume the conduct of the Interstate Championships, which were held in Melbourne on the Lower Yarra. All States were represented in the King's Cup, with four entries for the sculls. Victoria was stroked by Alex McLeish from Albert Park and coached by Wally Ricketts, with the club also being represented by Jack South in the five seat. Victoria had no difficulty in retaining the King's Cup with an easy victory from New South Wales and Western Australia. The sculling Championship was won by the great New South Wales sculler Herb Turner, the first of his four successive wins in this event.

As the season closed, the effects of the Depression were becoming more apparent, with membership having dropped to 185 from a peak of 208 two years previously. Over the same period the club's income had fallen by £135 to £521. It is to the credit of the committee of the day that despite these difficulties, sufficient funds were available for the purchase of a new four and the reduction of the club's overdraft by £201.