At the 1928 annual meeting Jim Sprigg again was elected captain, with Jack South succeeding Ron Shannon as vice-captain. Following the influx of new members during the previous year, and with the re-emergence of the club in Senior rowing, hopes for the new season were high for success in both the Senior and Junior Premierships. At Henley and Melbourne regattas in November six crews were entered and while the Senior Eight was defeated at Henley by a crew from Mosman (N.S.W) it recorded its first win of the year at the Melbourne regatta. The club's No. 2 Maiden Eight, with Ken Pope in the stroke seat and Alec (Streak) Miller as seven, defeated a record field of 25 crews at Henley and, while both the No. 1 and No. 2 Maiden Eights were successful in their heats and semi-finals the following week, they were defeated by Banks in the final. A further success at this double was by the No. 2 Maiden Four at the Melbourne regatta. These early wins were followed by further success at Footscray when Mercantile entered six crews, with the No. 1 Maiden Eight being successful. Following the Senior Eights' win at the Melbourne Regatta club supporters were optimistic of the result of the Champion Eights to be held early in December. However, this was not to be, as the Mercantile crew suffered a broken oar and was forced to stop rowing before the course was completed. This event was won by the Ballarat club crew. 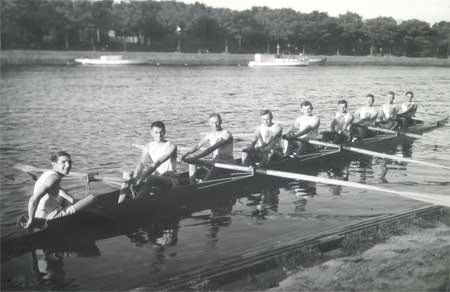 1928 Maiden Eight winners at Henley on the Yarra.

At the Christmas regatta, the club again was well represented at both Nagambie and Rutherglen with the only victory being recorded by the No. 3 Maiden Four at Nagambie.

After not being represented in the Champion Pairs held early in January, the club achieved success in the Champion Fours, held two weeks later. This crew was stroked by Cecil McKay, with Jim Macfarlane as coach. It was the club's first success in this event since 1921.

The appearance of Jim Macfarlane as a coach for Mercantile also was interesting. For many years he had had considerable success as both an oarsman and coach with Albert Park, but following a domestic difference with that club, he and three active oarsmen from Albert Park made application to join Mercantile. Initially they were informed that their application would not be favourably received by the Mercantile committee, but eventually the club accepted their nominations, after they had been approved by the committee of the Victorian Rowing Association. Unfortunately the circumstances of the transfers resulted in some ill feeling between the Mercantile and Albert Park clubs and it was to be many years before some of the older members of the latter club forgave Mercantile for "poaching" their leading coach and some of their best oarsmen.

At the Upper Yarra and Australia Day holiday double in January, Mercantile had seven entries. Unfortunately, the Senior Four was disqualified at Upper Yarra for taking its opponents water when leading. The crew made amends by winning at the Monday regatta, but this was the only success for the club for the weekend.

At the Ballarat and Barwon double, the Senior Eight, which included the ex-Albert Park oarsmen, with Jim Macfarlane as coach, won both times. Another gratifying win was Mercantile's success in the inaugural Champion Junior Eight, with the crew being stroked by Jack Bailey and coached by Jim Sprigg.

Following its defeat by Ballarat in the Champion Eights, it had become necessary for Mercantile to win virtually every remaining Senior event in order to win the Senior Premiership. The club's success in the Champion Fours had reduced Ballarat's advantage, and the success of the Senior Eight at Ballarat and Barwon assured Mercantile of the Premiership. Despite eight wins in Maiden and Junior events, including the Champion Junior Eight, the club could finish only third to Albert Park and Essendon in the Junior Division.

During the 1929-30 season the club recruited more than 70 members, with these including such notable future Mercantalians as Roy Thursfield and Norm Cairnes. The former quickly reached Senior status and was unfortunate not to have achieved selection in the Victorian King's Cup crew in the early 30's. Perhaps Roy's ability to attract trouble and antagonise officialdom had something to do with this omission. Roy Thursfield was secretary of the Melbourne Amateur Regatta Association (Henley) for a number of years and he has always been a most generous financial supporter of the club. The ill health he has suffered for more than 20 years has failed to dim his great humour or his enthusiasm for Mercantile. Roy Thursfield is both a vice-president and life member of the club and Patron of the Victorian Rowing Association.

Norm Cairnes quickly achieved his first win for the club at a Novice Regatta in June 1929. Considering Norm's present physique, present day members may find it difficult to believe that this success was in a Lightweight Novice Eight in the days of a Lightweight limit of 10 stone. Although never quite reaching the top as a competitive oarsmen, Norm Cairnes had considerable success in Maiden and Junior ranks, with an occasional row in Senior crews. He was appointed to the committee in 1934, became vice-captain in 1936 and captain in season 1937-38 but it was in the years following World War II that Norm Cairnes made such a great contribution to Mercantile, Victorian and Australian rowing. His success as a coach of club and Victorian crews is covered later in this history, but he also served several periods as secretary and treasurer of Mercantile and was for many years secretary of both the Victorian Rowing Association and the Australian Amateur Rowing Council. He was also largely responsible for the organisation of rowing at Ballarat for the 1956 Olympic Games. Still able to enjoy his Sunday morning row, Norm Cairnes is now a vice-president of the club and a life member of both Mercantile and the Victorian Rowing Association.

The 1929-30 season was designated as the club's Jubilee year and the executive decided on the ambitious programme of making every activity in the fiftieth year of the club's history a record. These objectives included a double in the Junior and Senior Premierships, all possible Championship wins and a substantially Mercantile crew as the Victorian King's Cup representatives. A Jubilee Dinner was conducted in November 1929, with the Jubilee Ball being held in June 1930. Other functions were Jubilee Club Eights, followed by a smoke night in May 1930. 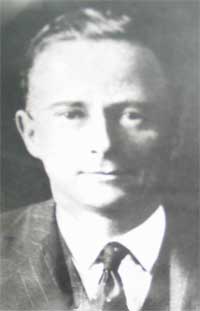 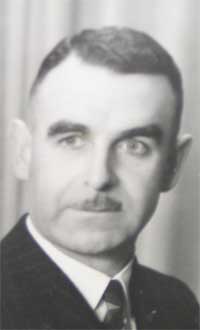 Jim Sprigg, who had worked so hard during the previous season to enable the club to achieve these aims had resigned as captain in April 1929, with Ron Shannon being appointed in his place. As the Jubilee Year opened, Shannon again was appointed as captain, with Doug Brooke as vice-captain. Alan Sloss had succeeded Jim Nicholls as secretary, with Alec Clarke entering his fourteenth year as treasurer.

As usual, the season started with Henley at the end of October. It was not an auspicious start for Mercantile, with all seven entries being defeated. The Senior Eight stroked by Cecil McKay, and coached by Jim Macfarlane, rowed a dead-heat with Essendon in their preliminary heat, but was defeated in the final by Hawthorn. The same entries, together with four additional crews, competed at the Melbourne regatta a week later and, although the Senior Eight again was defeated by Hawthorn, Mercantile won the Junior Eights, Junior Pairs and Maiden Eights.

Further successes followed at Footscray, with two wins from 11 entries. However, with the season well under way the club had still to score a point in Senior events. This was remedied in the Champion Fours in December when Mercantile, stroked by Cecil McKay, won from Rutherglen and Melbourne.

At Nagambie, Mercantile's only success from its seven entries was in the Junior Fours. Large entries again were made for the Australia Day weekend regattas, but of the nine crews entered at each regatta, the only successes were a double Senior Four and in the Junior Eights on the Monday. The club was still far short of its objectives of a double premiership and at the end of January a circular was despatched to all members reiterating the Jubilee aims.

Success was immediate and at Ballarat the club won the Senior Eights, Junior Fours and Maiden Pairs. At Barwon a week later, the Senior Eight completed a double and the Junior Eight also was successful. The Champion Eights were held two weeks after Barwon and for this event Alex Sloan, who had been seriously ill for a number of months, resumed as joint coach of Mercantile in conjunction with Jim Macfarlane. With only four crews contesting the event, Mercantile won by two lengths from Richmond, with Hawthorn third.

Two weeks later, the club recorded its second successive victory in the Champion Junior Eights, with the crew again being stroked by Jack Bailey.

The Senior Premiership was secure, but good results were required at the closing regattas at Bairnsdale and Sale to ensure success in the Junior Division. Four crews competed at both of these regattas and with a double Maiden Four and a Junior Four win at Sale, the club took the Junior Premiership from Albert Park. This was the first time in the club's history it had won both Premierships, a distinction previously gained by only one other club - Albert Park in 1906-07.

With two Richmond oarsmen, six members of the Mercantile Champion Eight were selected for the Victorian King's Cup crew. In addition, Bill Green was coxswain and Alex Sloan coach. With all six States competing, the race was rowed on the Murray at Mannum, South Australia. After a gruelling race, Victoria, with a magnificent finish, won by three feet from New South Wales, with Queensland in third position. After 18 years Victoria's rowing prestige had been restored and the State won the King's Cup for the first time since it became the trophy for the Australian Eight-Oared Championship.
In the rowing sphere, Mercantile had achieved all of the ambitious aims set at the start of its fiftieth year. The social celebrations were equally successful, with a record attendance at both the annual dinner, held in the Melbourne Town Hall, and the annual ball, held at Ormond Hall. The Jubilee Eights, confined to club members, attracted an entry of 88 members and was rowed over the last half mile of the Henley course. This was followed by a smoke night in the clubhouse and members entertained the coaches of the season and the winning King's Cup crew. 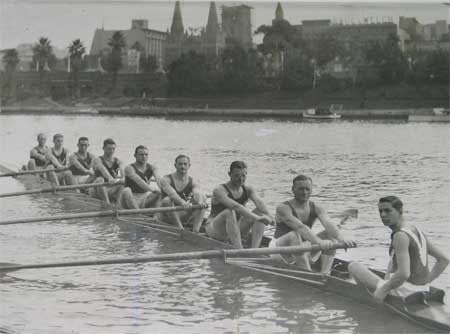 During the year membership increased to 208, passing the 200 mark for the first time. Six new boats were added to the fleet, but despite a total expenditure of £448 on these boats, the club finished the season with a small surplus of £16, increasing Mercantile's capital to £3,408.

Mercantile had good reason to look back on its achievements of 1929-30 and the preceding 50 years with satisfaction. It had come far since its days as a tenant of Greenlands boathouse and the use of hired boats.

Perhaps as the club enters its Centenary year it is appropriate to record these words from the club's fiftieth annual report:
"Such achievements to appropriately mark the Jubilee Year are the result of fine team work, in which many old members co-operated with the present generation and demonstrated that the spirit of the old club and its traditions are something to be proud of and provide an incentive to do things worthwhile when the occasion arises."