Again, the club executive remained stable as the 1922-23 season started, with the only change being that of vice-captain in the appointment of Bert Smyth in place of U. R. Smith. During the year membership increased by 15 to 146, despite an increase in Senior subscription to £3.3.0. With Henley as the first regatta of the new season, the Senior Eight, with only one change in personnel from the previous year's Champion Eight, repeated its success in the Grand Challenge Cup and at the Melbourne Regatta won the Morell Cup for the fourth time in succession. At Henley a Senior Four also competed without success, this crew being stroked by veteran Bob Rush, who at 40 years of age was rowing in his last competitive race for the club. At the same regatta a Maiden Four, stroked by Bill Pitt, won from a field of 18 crews, thus enabling the club to claim the distinction of being the first club to win, on various occasions, all events listed on the Henley program. This same crew went on to win the Junior Four at the Melbourne Regatta and on both occasions was coached by Doc Cooper.

The Senior Eight's success continued in the Champion Eights, rowed in December, 1922, when it repeated its win of the previous season with a two and half length victory from Melbourne University and Albert Park.

The club's dominance in Senior ranks continued for the rest of the year. Although a four stroked by Jim Buchanan could only manage second place in the Champion Fours in January, 1923, and was also defeated in the Senior Fours at Upper Yarra and Albert Park over the holiday weekend, the Senior Eight was victorious at both the Ballarat and Barwon regattas. By its win in these events the Senior Eight achieved eight successive wins and equalled the record established by Yarra Yarra in 1890. Another successful year ended at the Sale Regatta with a winning Junior Pair and Lightweight Maiden Four. This latter win was the club's first victory in Lightweight ranks and the forerunner of the many successes Mercantile was to achieve in that division in the years to come. 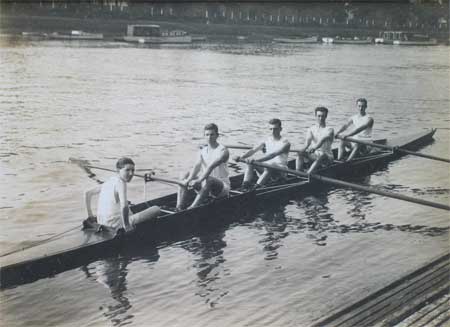 In the King's Cup, rowed in Perth, the club was well represented in the Victorian Eight with Jim Buchanan as stroke, Bob Gregg (7), Jack Mounsey (6), Harold Rush (5), Eric Counihan (cox) and Ted Kenny as manager. The Victorian crew could finish only third behind South Australia and Western Australia.

The annual meeting of 1924 resulted in a number of changes in the club executive. Ted Kenny, who had been captain for the previous four years and vice-captain for four years prior to that, announced his retirement. During those eight years, the club had prospered under his guidance. His tact and courtesy, coupled with his great knowledge of every aspect of rowing and its administration and his personal determination to achieve the highest standards, were instrumental in awakening pride in the conduct of the affairs of the club. Ted Kenny's interest in the sport and Mercantile continued throughout the rest of his life. He was a member of the club committee for many years and subsequently elected a vice-president and life member. He also continued as secretary of the Victorian Rowing Association and the Melbourne Amateur Regatta Association (Henley). Ted Kenny contributed greatly to the organisation of the rowing section of the Melbourne Olympic Games in 1956, and it was a matter of great regret that his death occurred shortly before the conduct of that event, for which he had worked so hard.

With the exception of Alec Clarke as treasurer, Mercantile started the 1923-24 year with a new executive. Frank Betts, who had been transferred to Canberra, and Bert Smyth both found it necessary to relinquish their positions of secretary and vice-captain respectively. Jack Mounsey was appointed captain, M. C. Boniwell elected vice-captain with Joe Dunstan becoming secretary. Unfortunately, these changes coincided with the decision of a number of members of the club's successful Senior Eight to either retire or have a rest from competitive rowing. Although Mercantile was represented in both the Champion Eights and Fours and the majority of Senior Eights and Senior Fours rowed throughout the season, the oarsmen in the rebuilt Senior ranks were not equal to the task and no senior points were recorded in this Premiership, which was won by Wendouree. In the Junior division the club had more success, starting with a double Junior Eight stroked by Bill Pitt at Henley and Melbourne Regattas. At a special Maiden Regatta held in December, 1923, Mercantile entered two Maiden Eights, with these crews finishing first and second. Other wins included a Junior Four at Ballarat and a Maiden Eight at Barwon. These successes enabled the club to finish a creditable third to Banks and Wendouree in the Junior Premiership.

On the financial side, the club finished the year with a deficit of £73 with this being attributed to the cost of extensive repairs to the boathouse (£165), the welcome and overdue installation of sewerage at a cost of E107 and the purchase of a new Best eight, the "S.J. Morell" for £92. This new boat replaced the club's only other Best eight, which had been in commission for over 15 years and one wonders at the reaction of present day Senior oarsmen if they were required to row in equipment of this vintage.

The club was not represented in the Victorian King's Cup crew, the race being rowed in Brisbane and won by the Queensland crew. Victoria, represented by a Wendouree club crew, did not finish owing to an accident, but the State received some satisfaction from the victory of Jim Barton of Richmond Rowing Club in the Sculling Championship, bringing Victoria its first win in the event since 1909.

Jack Mounsey again was appointed captain for 1924-25 but due to pressure of business was forced to relinquish the position in favour of Harold Rush in January, 1925. Frank Betts returned to the executive as vice-captain and Joe Dunstan being re-appointed secretary and Alec Clarke continuing as treasurer.

With Cecil McKay back in the stroke seat, considerable hopes were held for success of the club's Senior Eight at the Henley and Melbourne Regatta double of 1924. This crew was coached by the legendary Syd Edwards, who had been senior coach of Mercantile's crews in the 1890's. At Henley the crew were defeated in its heat, but showed considerable improvement at the Melbourne Regatta by winning its heat and being defeated in the final by only two feet by Melbourne University. A Senior Four, which comprised the winning Maiden Four at Henley two years previously, was successful in the Stewards Challenge Cup at Henley, but was defeated in the Champion Fours held three weeks later. The club's only other representation in Senior rowing for the rest of the season was in the Champion Eights and Champion Pairs, neither of these crews being successful.

In Junior ranks Mercantile's achievements during 1924-25 were equally dismal, with the only successes being a Maiden Four double at Henley and Melbourne Regatta and a Maiden Pair at a later fixture. This was supplemented by a lightweight four victory at the VRA Regatta. 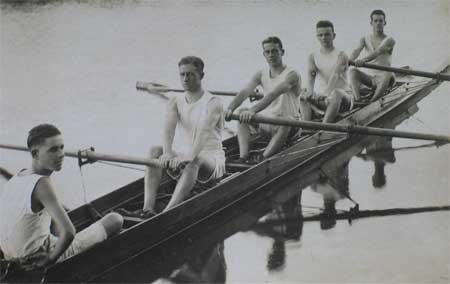 With a total of only four victories for the season, Mercantile finished well down the list in both Premierships, which were won by Wendouree and Essendon respectively.

Again the club was not represented in the Victorian King's Cup crew, with this event being held in Melbourne and won by Western Australia. The 1925 Sculling Championship resulted in a popular win for the Victorian representative, Arthur Cambridge of Sandhurst Rowing Club.

During the 1924-25 season, membership of 143 had shown a slight decrease over the immediately preceding seasons, but again Mercantile was recruiting well, with its new members including such prominent Senior and Interstate oarsmen of the future as Doug Brooke and Jack South.

Doug Brooke was to compete in Maiden crews during the following season with only one success. Following a transfer to the country, he returned to Melbourne three years later and immediately became a member of the Senior Eight. His subsequent winning record included two Champion Fours, a Champion Eight and numerous Senior Eights and Fours.

Following a win in the six seat of the Victorian crew in the King's Cup at Mannum, South Australia in 1930, he continued his active career until the 1935-36 season, and after his retirement coached with considerable success. Doug Brooke was vice-captain of the club during its great success of the 1929-30 season and served on the committee for a number of years. He has never lost his interest in Mercantile and continues to enjoy his Sunday morning paddle and the refreshments which follow.

Jack South had more immediate success in Junior ranks, winning double Junior Eights at Henley and Melbourne Regattas of November 1926, and the same event at the Upper Yarra and Australia Day double in January 1927. By the 1927-28 season he was a regular member of the Mercantile Senior Eight and rowed in the Victorian King's Cup crew at the end of that season. This was the first of six successive occasions on which he represented the State, being a member of the winning crews of 1930 and 1932. Jack South retired from active competition after the 1932-33 season and became a successful coach of club crews and, in particular, of Lightweight oarsmen. Following the Second World War, he became a Victorian State Selector and in this capacity participated in the selection of a number of Victorian State crews of the 1940's and 1950's. A man of great humour and constant cheerfulness, Jack South was respected by all members who were privileged to know him and his premature death was a severe loss to Mercantile.