The first series of races was held on 15th October 1886, but due to bad weather and the lack of boats, they were not completed until a year later.
A regatta was held on 4th February 1888 and the programme stated "This club has now a commodious shed and a fair stock of boats (being increased); every facility for plenty of sport."

The second regatta on lst January 1889 was held at Leichhardt Bay (above Iron Cove Bridge, Long Cove) with the flagship "Nonesuch" lent by T. McCredie and Son and consisted of both rowing and sailing events. The club rowed with the colours of buff and blue, the governor's colours, having been granted permission to use them. One of the races was for "Unlimited crews, in fancy costume, in shipwright's punts, propelled by shovels." The committee reserved the right to award the prize to the most fancifully dressed crew of the punts which went the whole course. This regatta and the one on lst January 1891 included races for "Manual Labor amateurs". The three original gradings of Professionals, Bona Fide Amateurs and Manual Laborers dated from the 1860s. The steamer the. "Birkenhead" followed the races and the Leichhardt Brass Band presented a programme of music including "Pride of Sydney", "Beautiful Loch Lomond", "Gems of the Opera" and an Australian Anthem "Advance Australia".

The records note another regatta on 22nd September 1894 and then a break until 25th February 1905. The prizes for the Invitation Eights at the regatta held on 6th March 1906 were decided to be eight match boxes and one sweater (at a cost of 45/-d.). By the club's regatta on 14th November 1906 the club had decided they would race wearing white singlets with cardinal and navy shield. In March 1907 the committee added caps, cardinal with navy blue piping.

About this time the club began to engage the Lady Hopetoun to follow the races and a band such as the Newtown Brass Band of twelve players, the Bavarian Band or the Leichhardt Champion Band. For the regatta held on 10th February 1912 they used the services of the police launch and an umpire's launch and refreshments included 10 gals. beer and 15 gals. ginger beer.

At the committee meeting on 7th August 1912 the club asked their delegates to move at the next N.S.W. Rowing Assn. meeting that a sub-committee be appointed to enquire into the possibility of holding a Henley on Leichhardt Canal, which on occasions came to be known cheekily as Henley on the Drain. The regatta on 7th February 1914 was held on Iron Cove, and incidently included a Ladies Pair Oar, but, by the Leichhardt Honor Roll Regatta on lst November 1919, regattas were being held on Leichhardt Canal. This also included a race for ladies, as well as a motor boat race, aquaplane display and a "bang and go back" race. The programme advised "The club's fleet is one of the finest in Australia and will accommodate 100 men on the water at the one time".

In the twenties, dances or Gipsy Teas followed the regatta, sometimes on Rodd Island. The regatta programme of 24th February 1923 featured a photograph of A.G. Bull, Amateur Champion Sculler of Australia and N.S.W. and a member of Leichhardt. At the regatta on 16th September 1922 the winning crews received a photograph of the crew for their club. By 1925 the regatta on the canal was programming all serious races, except a novelty canoe race, and the club was racing wearing Cerise and Navy hoops.

The first Henley Regatta was conducted in October 1923 by the N.S.W. Rowing Assn. followed by four more at yearly intervals. Sydney's 6th Henley Regatta was held jointly by Leichhardt and Haberfield from 3rd to 10th December 1927 on Haberfield Reserve and Canal. The grounds and approaches were brilliantly illuminated and a Henley procession left Ashfield Town Hall prior to the races. In the evening there were grand illuminations, Ferris Wheel, Chair-o-plane, Performing Fleas, a boxing show, etc. together with National Dancing Competitions and a Grand Scotch Night. The final Saturday featured a Horse Gymkhana, grand parade, decorated houses and boats, plus rowing/athletic races with 8 men and cox to run in rowing kit. Milton Kent promised some thrills to visitors following his recent winning of the Queensland Aerial Derby in his own monoplane - a Westland Widgeon.

The J.B. Sharp Cup for Winter Racing began in 1924 and offered an opportunity for racing between Balmain, Drummoyne and Leichhardt clubs, with Haberfield and Glebe clubs joining in later about 1930. Clubs conducted regattas from their own sheds for this trophy for many years.

A special Regatta was held for the re-opening of the club in 1944 when the clubhouse was moved to a new position, due to army use of land in Leichhardt Park. The 2nd World War reduced the number of regattas held, due to lack of oarsmen, but when it was over, they became more of a regular feature, 900 oarsmen completing in 36 events at the regatta held on 18th March 1961. At this time the club raced with Red and Blue V on White. By the eighties both men and women were racing under Red, White diagonal on Navy.

The fleet over the years needed constant care and maintenance. In August 1887 the committee debated offers of boats for sale and finally agreed to
purchase a pair of clinkers from Vipond of Pyrmont Baths. They then ordered some new boats from Mr. Yates, 2 double scull club skiffs "say 22 ft. cedar throughout fitted with best brass roller slides, latest improvements and best sculls, full set (association standard) swivel rowlocks, heel pieces and all latest improvements". The two single club skiffs ordered were to be similar, only 18 feet long. All materials "to be of the best quality and seasoned timber, workmanship to be of the best and the material and workmanship to be to the entire satisfaction of the committee". The cost for the whole to be £52. 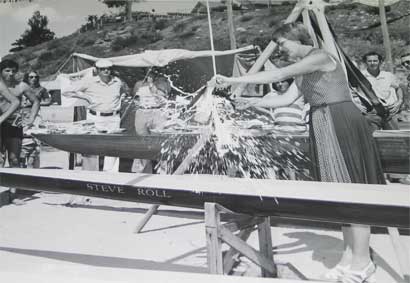 1974 Naming of the Steve Roll by Hazel Roll