9. Between the World Wars

Some successful re-unions were held after the war. Old rowers attended
a buck's picnic with club members on 8-hour day 1920. A Re-union dinner was held on 19th August 1922 and a launch picnic re-union was held on 7th March 1926. The club was anxious to attract old and new members to replace those lost. The annual picnic was held regularly at Woronora River, launch picnics, football competitions and picture nights adding to the social life. Balls became popular again in the thirties. At the end of 1923 the committee was concerned with the rowdiness at the recent Smoko and took measures to control it.

On the water the club had a few successes, winning both the Junior and Senior Premierships in 1920/21 and the champion eights in 1920/21 and 1925/26. A.G. Bull had joined the Leichhardt Rowing Club just after the war and became amateur champion sculler of N.S.W. and Australia in the early 1920s. Every sculling race held in the 1922/23 season was won by a member of the club. 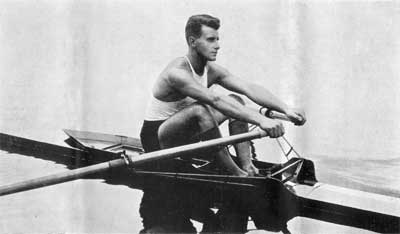 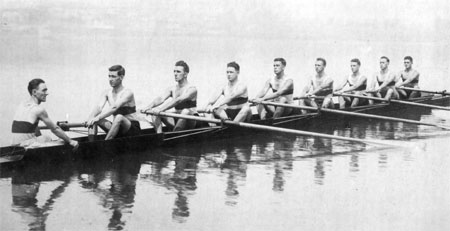 In the 1927/28 season G.Wallis, C. Hurley, W. Ridley and 0. Dowling with E.E. Keary as coach, gained selection in the state eight to compete in the King's Cup. The King's Cup had been won by the Australian Army crew at Henley England in 1919 (when two of Leichhardt's members rowed - T. McGill and H. Hauenstein). The cup was brought home to Australia, and became the major trophy competed for at Australian regattas.

During the depression years in the late twenties a "certain laxity" was allowed in rules governing finance and subscriptions, due to the general depression.

The state of the fleet fluctuated. Just after the war the club had two racing eights, three association fours, three pair oars, two skiffs, two practise eights, four practise fours and four racing fours. Swivel rowlocks were introduced on most boats in 1928/29 and most were interchangeable for swivel or poppets. By the 1938/39 season the annual report was saying
"Fleet does not bear comparison with previous years". Boats were borrowed on a number of occasions at that period.

The clubhouse and pontoon demanded attention from time to time. The water supply was renewed and three showers and four taps installed in 1922/23. After much discussion over the years, commencing in 1914, electricity was finally installed in the 1926/27 season, 800 yards of wire being used. That same year the clubhouse was painted. In the 1926/27 season the pontoon was sunk by a storm, refloated with difficulty and repaired by C. Kayser.

The clubhouse deteriorated and a special meeting was held in Leichhardt Town Hall on 20th June 1934 in an attempt to gain support for a new clubhouse. Progress was slow. The club negotiated with Leichhardt Council but it was not until 1939/40 that the clubhouse was eventually built, being officially opened by the Mayor of Leichhardt, Ald.J. Stuart on 4th May 1940. He was supported by the President, F.G. Baker and Aldermen and Officers of the Leichhardt Council, assisted by the Mayor of Marrickville, Ald. H.D. Marr, Secretary of the N.S.W. Rowing Association, Mr. J. Rook and the Captain, Mr. W. Dougherty. Leichhardt Band supplied musical entertainment and a large crowd of members, ex-members, friends and residents attended.

In 1936 a difference of opinion on rowing styles saw Dr. Parkes take from Leichhardt to Haberfield members who were to be the nucleus of Haberfield's strength for many years. They were Jack and Alec Eddie, Lance Robinson, Dave Marks, Hal Ruffles and Gordon Harrison, all of whom would become successful King's Cup oarsmen.

In 1936 the club celebrated its 50th Anniversary with a re-union dinner held at Miss Bishop's, 117 Bathurst Street, Sydney when the menu listed "How to Live on 30/- per week -