The club "sailed" into, the war years on a high note. They had won the Challenge Eights at the St. Ignatius' regatta on lst March, 1913, and exhibited the Gold Challenge Cup awarded to them. The winning of both the Junior and Senior Pennants the following year was cause for much celebration and the pennants were unfurled at Rodd Island in August 1914.

At the shed, the services of the caretaker were reduced to three days weekly at 10/-d. for the three days. The committee made efforts to "stop any horseplay off the pontoon and in the clubhouse" and decided to hold over the order for oars in November 1915 as there was a slump in the rowing world and the club was in financial straits. Clearly the war and the loss of members to the services were having their effect.

In March 1915 it had been decided there would be no President's Trophy awarded as so many members had left for the war. Later that year it was changed to the "Winter Premiership Trophy;" but by November 1915 the premiership was in abeyance for six months. The N.S.W.Rowing Association had asked for names of those who had joined the Expeditionary Forces and many names were supplied from Leichhardt Rowing Club. The club prepared an Honour Board which shortly afterwards had to be lengthened.

The club was saddened to hear of the death of Arthur Vincent Kenny at their meeting in November 1915 "from wounds received in action fighting for home and country at the Dardanelles". A.V.Kenny had been a member of the committee for a number of years, having been first elected in 1909, and he also served for two years on the selection committee with Allan Ramsay, the honorary coach, and another member. He had helped wherever possible, having last been responsible on the flagship for the regatta on 7th February 1914. The committee decided in April 1916 to rename the "Leichhardt" boat, the "A.V. Kenny" and this was done with Kenny's father present on 17/6/1916.

Social functions were held but not as often. Rodd Island was the venue for a Gipsy Tea on 29th July 1916, the first of many. The Western Suburbs Ladies Rowing Club contacted Leichhardt Rowing Club regarding raising funds to assist any rowing men who returned from the front disabled. A card evening was held in December 1916 and picnics to Woronora River became regular functions. Milton Kent, a photographer member, gave several photographs to the club and in March 1917 the committee themselves were photographed. In 1917, Anzac Day was the chosen day for the Annual Meeting and special invitations were issued to soldier members.

Following a severe storm the shed was inspected in late 1917 and insurance taken out on the premises and contents. As Enterprise Rowing Club had lost their premises and boats, Leichhardt offered their help. However, Enterprise did not recover from this set-back, though several of its members joined Drummoyne when they opened in 1919.

Notices appeared in the clubhouse. A list of names and addresses of serving members was displayed so that members at home could write to them, together with a notice advising the time limit for boats to be kept out and that boats must not be taken past the bridge after sundown under the War Precautions Act. The N.S.W. Rowing Association asked that members' names and addresses be forwarded to the Hon. Secretaries of the sporting branches of Recruiting Movement and a list was placed in the shed for members to add their name if they desired.

£20 was invested in a War Loan in February 1917 and £43.15.0 in War Savings Certificates in July 1918. Christmas greeting cards were sent to all members at the front in 1917 and an Annual Re-union held on 14th December when 15 gallons of beer and 5 gallons of ginger beer were consumed. Another Re-union was held on 21st December 1918 at the Dispensary Hall.

Early in 1918, Private Leo T. Carroll was killed and in August 1918 Memorial Cards were sent to the families of A. Dowding, F. McGraw and N. McGill killed in action.

Small repairs were made to the balcony and flagpole in 1918. C. Kayser made a cement floor for the shower and attended to pontoon repairs. The caretaker's wages rose to 15/-d. per week at the end of 1918 and six months later rose to £1. 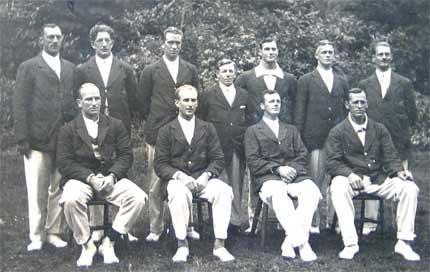 Proceeds from a regatta held on lst November 1919 were given to the Leichhardt Soldiers' Memorial and the programme asked for new members "to replace those who left to serve with the A.I.F. and who, for different reasons, have not yet returned to the sport". The club's Honor Board at that time contained the names of over 100 members who served in the forces during the first world war. On 22nd December 1919 a "Welcome Home" was held for soldier members past and present and in June 1921 a blind ex-soldier was admitted to membership of the club. When the eight-oared boat "A.V. Kenny" was retired, its bow was placed in a prominent position in the shed as a memorial to him. At the end of 1923 the War Bond was redeemed.