Committee meetings were held at private homes of committee members, the O''Brien's, the Cansdell's, the Walsh's, at the Kingswood Hall and the social hall before the club shed became available as a meeting place. Mrs. Ireland presented candlesticks and other fittings for the committee room. The first Annual Meeting was held on 21st October 1886 and the second on 5th October, 1887. The punt was fixed in position, but unfortunately filled up. It was later secured with chains under the stage. Mr. 0'Brien Snr, borrowed Mr. Westbrook's dray and horse and with the help of a few members, filled in the hollow ground at the rear of the club shed, just prior to opening day. Rules were altered to allow payment of entrance fee and first quarter's subscription by instalments, a branding iron was purchased to brand all club property and social/fund-raising functions were organised.

However, the main reason for the club's existence was difficult to fulfill while they had no boats. Four trophies had been presented by the Captain (Mr. 0'Brien, Jnr.), the Treasurer (Alderman B. Moore), Vice-President (Mr. 0'Brien, Snr.) and the President (Alderman F. Walsh). They were a silver cup, a handsome fruit stand, a handsome album and a silver tankard respectively.

A skiff race was held on 14th August 1886 for the silver cup and was won by J. Mahalm, the two contestants using Mahalm's boats loaned for the occasion. The steamer "Esther" was hired by the committee to follow the race, and was patronised by the Leichhardt residents.

The steamer "Gannet" was hired for a series of races on 15th October 1886 but was not patronised to expectations due to bad weather. Furthermore the events of the day were not concluded and were not finally rowed until 8th October 1887. The general feeling was that all efforts should be concentrated on building the shed and acquiring club boats, particularly in view of the expense entailed in organising races.

The first club boats became available in the latter half of 1887 but there was a problem with a single scull skiff not being built to specifications. Negotiations with the builder resulted in the boat being returned.

A regatta was held on 4th February, 1888 when a special skiff race was programmed for Aldermen of the Leichhardt Council which indicated the degree of co-operation between the Council and the club, and the number of aldermen involved in rowing.

Life membership was obtainable on payment of £10.10.00 and Mr. S.H. Hyam, M.L.A. became the first. Mr. T.McCredie deducted that amount from monies owing to him to become the second, and Mr. Fred Walsh did likewise regarding the £11 owing to him for purchase of a pleasure boat for the club. Those who became Honorary Life Members thereafter did so by being elected in recognition of services, though a subscription was still payable.

Fred Walsh was elected club delegate to the Centennial Regatta Committee in December 1887 and a special meeting of the club committee in March 1893 carried a motion that the Leichhardt Rowing Club join the N.S.W. Rowing Association, with S.M. Stewart and H.A. Rudder as club delegates.

As the club had two plumber members, water was laid on to the shed in October 1888, and a screen provided the following year for the W.C. 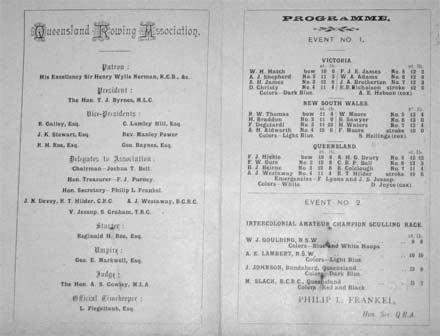 W Lambert of Leichhardt was the NSW Sculler

In August 1894 Mr. T. Low was engaged as a caretaker at 5/- per week but this was increased to 10/- on 20th October 1894 as set hours were given when Mr. Low was to be present at the clubhouse. His services were dispensed with for three months the following year due to lack of funds, even though subscriptions had been increased to 12/6d. per quarter to cover additional expenditure.