"The club has been formed without any regard to the condition of life of those who become members of it - and, as the address presented to me expresses it, the manual labourer and the brainworker row side by side in the same boat. Well, that is exactly how it should be - not only on these bright waters but on shore."
—Sir Henry Parkes, Premier, N.S.W. Opening Day, Leichhardt Rowing Club 24th September, 1887.

A large and enthusiastic gathering took place in the Council Chambers at Leichhardt on Thursday, 29th May, 1886, at which the Mayor presided. The Mayor had been requested to call a public meeting for the purpose of forming a rowing club, following a preliminary meeting in the Albert Hall in May 1886 which had been arranged by Mr. A.Cansdell. Members of the Balmain Working Men's Rowing Club attended both meetings and gave some very valuable advice from their experience. The meeting at the Council Chambers resulted in the names of 24 gentlemen for active and 6 for honorary membership being handed in and the following rates of subscriptions being fixed after much animated discussion.

A provisional committee drafted a Code of Rules which were adopted with a few slight amendments at a subsequent meeting on 10th June, 1886, presided over by Mr. S. H. Hyam, M.L.A., who became the first life member of the club. His Excellency the Governor, Lord Carrington, accepted the office of Chief Patron and granted permission in a letter dated lst July, 1886 for the use of his colours - buff and blue. The following officers were elected at an adjournment of this meeting— 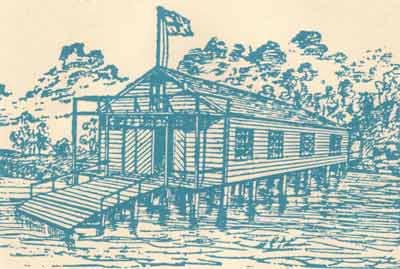 1887 Drawing of the Clubhouse

The drawing was made by the first secretary E W Johnson. Buff and blue were the first colours of the Club. These were the colours of Lord Carrington, the Governor in 1886, who granted permission for their use.

Permission was obtained from the Crown for Leichhardt Park Trustees to use water frontage for baths and rowing club sheds through the efforts of S. H. Hyam, M.L.A. After considerable trouble, Messrs. O'Brien, Sen., W.E. Johnson, and A. Cansdell obtained completion of the club's tenancy of fifty feet of water frontage by any reasonable depth required. A dredge was promised but when sent round, it started on the site of the proposed baths and was removed before completion of the work.

As funds in hand amounted to only £27.17.1d., Mr. W.C. Goodchap of Norton Street supplied plans and specifications for a shed free of charge, the cost of the materials being estimated at £ 150. However the material was obtained on twelve months' credit from A.M. Burns of Balmain, on lodgement of a promissory note signed by Fred Walsh who was supported by pledges for £25 each from other members.

The tender of Beane and Bush for £ 80 for the labour of erecting the shed was accepted, but due to modification it was reduced to £ 60. After erection, due to insufficient depth of water, it was advisable to extend the staging a distance of twenty feet. Mr. T. McCredie agreed to perform the labour of driving the piles free of cost and to supply the materials on credit. Needed dredging was obtained through the efforts of members of Parliament for Balmain.

The Sydney Mail of 2nd July, 1887 said -
The Leichhardt Rowing Club is in a peculiar situation. They have a really good boat house, but no boats. A concert will be held July 6, and it is hoped the club will be placed in funds sufficient to enable the purchase of suitable boats. Things have not been well managed with this young club; otherwise a better start would have been possible long ago.

The Committee did not deserve this judgement as they had worked long and hard to make the club a working proposition against many difficulties.

Subscriptions were very slow coming in and arrangements for an Art Union were well in hand but not producing revenue at that time. The concert resulted in a profit of £11.17.8d. and some members paid subscriptions early. This enabled the purchase of boats to commence.

A pair of clinker outriggers were bought from Mr. Depond of Pyrmont for a cost of £ 23 (£5 deposit and balance over six months). Mr. W. Yates of Leichhardt was instructed to build 2 single scull club skiffs and 2 double scull
club skiffs at a total cost of £52 on terms extending over a period of six months, and these were delivered before the end of 1887. A family pleasure skiff was bought at auction for £11 in October 1887 with Mr. Walsh giving the club six months' credit.