It has always been a problem and an expense to transport boats to Regattas. In the early years it was the practice to row boats to Regattas and Perth Clubs rowed their boats to Fremantle Regattas, and really the position did not become complex until the Club obtained its first eight oared boat and entered in competitive eight oared racing in 1906. Boats had been towed to distant Regattas at Guildford and Belmont and on occasions towed to Perth Regattas by private launch and this procedure continued through to 1914.

Upon resumption of racing after the War, Harold Tilley and Fred Tilley became active members of the Club. Alf Tilley who incidentally was the contractor responsible for the erection of the dressing shed addition to the Clubhouse in 1905, started a business of hiring out launches and his sons Harold and Fred were involved in the business which was carried out in the area between the eastern wall of the Clubs dressing shed and the low level traffic bridge.

One of the launches, "M.V. Dauntless", had an open top deck and the Club made timber beams to fit across the handrails of this top deck placing one at the extreme forward end and one at the extreme aft end with a supporting beam in the centre. The hand rails had a height of approximately three feet and this construction made it possible to carry the eight oared boats fore and aft of the launch 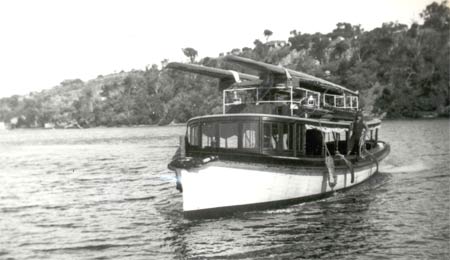 The smaller boats were placed on "sausages" on an outside area of the deck between the foot of the handrails and the outer edge of the deck. Riggers were always a problem and had to be carefully positioned. The top deck of the launch became a boat deck and there remained barely enough room for the helmsman who would be either Harold or Fred Tilley.

At the Perth regattas the boats would be unloaded and loaded at the old Mill Point Jetty on the southern side of the Narrows where the Club made its headquarters and used the clang of the ships bell to urge on the Fremantle crews as they approached the finish of their races.

The Tilley family were always good friends to the Club and when possible provided a launch to act as Judges post at Fremantle Regattas and in later years provided the launch for Club Picnics to Como and to Garden Island.

The "Dauntless" was used for transport of boats to Regattas until the end of the 1934 Season. It had really been another social event in the Calendar of the Club. The ladies traveled on the launch and provided afternoon tea and on the trip home a piano was played and singing of well known tunes enjoyed by all. The oarsmen had an area in the bow of the launch which was used as a change room, and where a few bottles of ale were planted for the return journey. It was of course winter time and quite dark when Fremantle was finally reached.

Boats were off loaded, then bicycles and trams took most people home. The launch usually called at the Mosman Bay Jetty to embark and on return disembark the oarsmen living in the Cottesloe area.

It was a long afternoon as all oarsmen in those days worked a half day on Saturday, some until noon and others until 1 p.m. and on the occasions when the weather was very rough. the "Dauntless" could not be loaded at Tilley's jetties so it had to be taken through the bridge to the Wood (East Street) Jetty and the boats all carried through the arch under the traffic bridge, which on a wet day with limited time, was no mean achievement.

The possibility of transporting boats by road had often been considered and in 1931 a sub committee was formed to investigate the matter, but it was not until 1934 when the Club President R.S. "Pop" Jeffreys returned from an overseas trip, having visited Henley on Thames Regatta where he saw at first hand the vehicles used for Road Transportation, that progress was made.

"Pop" called in his friend Frank Shaw and from some rough sketches on the back of a programme they designed a rack capable of being constructed on a motor truck. Alex Yeing agreed to drive his truck with boat rack attached for the sum of two pounds per Regatta.

The construction of the rack provided a span of 40 feet by having the four legs of the rear portion in the four extremities of the tray of the truck, then to get support for the front end of the rack 3 section was made to fit from the front bumper bar of the truck to the extended Limber of the rear portion. Extra length was then obtained by having the rear and front supports extended at an angle of about 45 degrees from their base Thus the structure allowed boat space which extended just above the driving cab of tile truck.

The ends of all joining timbers were marked in order to avoid confusion when being assembled. The timbers were bolted together with three quarters of an inch steel bolts. The rack was first used for the 1936 season and was carried on Alex Yeing's truck until 1939 and after the war for one only regatta.

It was at this time that Alex retired after faithful service to the Club and he was able to concentrate on the South Fremantle Football Team. The year was 1946 and Ted Bullock agreed to transport the boats at a new price of two pounds ten shillings (equiv $5) per afternoon but by 1948 the rack was suffering from worn bolt holes and wartime storage.

A new rack became necessary and was constructed during 1948. Don Fraser (a successful Kings Cup Oarsman and prominent West Australian Rowinq Club member) was the designer. Timber was supplied by R. Malcolm Smith and Sons, (The two "sons" being Allan and Eric. senior oarsmen of the Club), steel supports provided by Syd Ryan (a Club Member) and construction carried out by Eddie Edwards, Jack Marriner and Gil Whittle.

All materials and services were provided free of cost to the Club and the new rack was a truly professional construction. The steel was to replace the timber as a forward support from the bumper bar and plates- were made in order to hold the joints more firmly. The new rack also gave improved carrying power for the small boats; two "trays" were built and could be fitted laterally cross the longtitudinal top timbers these trays allowed a four to be placed between the two eights in tile upright position and then a pair was nested inside the four by placing "sausages" on the runners of the four

The rack was a huge success and not only carried boats to and from Regattas, but when boats arrived by ship, which was the only interstate method of freighting boats in those times the boats were off loaded at the wharf straight on to the F R.C. rack. The boats were carried by interstate passenger vessels up on tile semi open top deck and strapped up under the stanchions.

Prior to the use of the truck, the boats arriving interstate had to be manhandled from the wharf to the Clubhouse. a very arduous task. Ted Bullock continued to carry the boats on his truck and was of great assistance to the Club. Ted's work for his truck was mainly on the wharves and it became increasingly difficult for him to be available on Regatta days and he retired at tile end of the 1956 season.

The next twelve years was a most harrowing time for the Captain of the time Bob Brealey as of necessity the method of transport had to be an almost last minute decision. There were three options. Firstly Peter and Jack Hall, two senior oarsmen, were able to use a truck from their family business when it was available. Secondly the boats could be towed by launch. Thirdly the boats could be rowed.

The Club was indeed fortunate to have the services of Bob Brealey, Peter Hall and Jack Hall in that period. Once again it must be remembered that it was winter weather which aggravated the situation. particularly if boats were being rowed, swampings were frequent and much time spent in the river. On one occasion the boats were lashed for towing and the oarsmen went to Perth by road and waited in vain for the boats to arrive, but the tow had run into bad weather along Nedlands foreshore and that was as far as they came.

However mainly due to the efforts of Bob Brealey, Peter Hall, Don Lewis and Ken Parkes a boat trailer was designed and constructed. The trailer was made of steel piping with one set of wheels and built in order to keep the boats clear of the towing vehicle when loaded.

The trailer was a first in Western Australia and since then the design of boat trailers has improved. Two features are, the use of dual wheels and boat stacking space The fact that boats can now be built in sections also helps. The trailer proved a great improvement in boat transport and in 1986 with care and good maintenance, is still in use and a very useful piece of equipment. With the building additions, it is intended to have an enclosed area into which the trailer can be towed after a Regatta and the boats safely left to be unloaded the following day, the present situation is that boats have to be left at the Regatta venue and transported to Fremantle the following day which, as always makes a tedious time for the rowers involved.