There are no records of officials of the Fremantle Ladies Rowing Club but there has always been a President and most times a Secretary. The early Presidents were the respective wives of the F.R.C. Presidents of the time. Mrs. Barnett was the first President and the pattern continued right up until World War 1.

Club Rooms were acquired and although there is no evidence the building would appear to have been made by the same people who were responsible for the F.R.C. Dressing Shed, built by Mr. Alf Tilley for the F.R.C. in 1904/1905. The building for the ladies was situated over the river at the foot of East Street, East Fremantle almost alongside a spring of fresh water that had an outlet in the limestone along the rivers edge. These Clubrooms served as Boathouse, Social, Hall, and Change rooms and remained until around 1930

The Ladies Rowing Club was the prime mover in establishing and carrying on the Annual Ball The First Annual Ball was held in the Fremantle Town Hall on Wednesday 19th September, 1888. The concept no doubt came from the Ball which was held by the civic authorities and followed the Official opening of the Fremantle Town Hall on Wednesday 22nd June 1887. This Ball was followed the next evening by a Children's Fancy Dress Ball and the Rowing Club Ball of 1888 was also followed on the next evening by a Juvenile Fancy Dress Ball.

Both the inaugural Rowing Club events were immensely popular as a newspaper of the day reported "I can only say that if they (the Rowing Clubs) continue to do so much for the amusement of the public, the Rowing Club will soon become the most popular institution in Fremantle."

Another feature which added interest to the Ball was the presentation by the President of the Ladies Rowing Club of medals won at the Annual Regatta by crews, including as was the case in 1888, a Swan River Rowing Club crew. The presentation ceremony laid the foundation of the support for the Annual Ball by the Perth Clubs which was maintained right through the years. The Juvenile Ball continued as an Annual Event and a report of the 1899 event records that it had been held at feast up until that time.

The Balls were always delightful functions. The Town Hall was gaily decorated with gum tree branches, potted palms, flowers in season (mainly roses) together with crossed oars around the hall and on the gallery rail and flags of every description kindly loaned by the shipping companies around the Port.

To add to the gaiety of the Ball the Ladies at their meetings and in spare time hand-made vvith crepe paper a large quantity of leis. The bright colours of the crepe paper were expertly assorted in the making of each lei, the finished article being sold for two shillings and placed around the neck of the dancer. Each lei had a number attached and during the evening a lucky number was drawn for a prize, which was usually a bottle donated for the purpose from a cellar.

The Ball always received Government and Local Government support, particularly in the early years when social events for the young people were very few. Another development of the Ball was in the 1930's when Debutants partnered by oarsmen and trained by Mrs Johnson were presented during the Ball providing a spectacular interlude and drawing quite a crowd of interested people into the Gallery of the Hall which was always made available for this purpose.

In the early years of the Ball, a special train from Fremantle to Perth was provided and it departed at 2.15 a.m. The train trip through the suburbs was another highlight of the Ball and a convivial finale. In later years, it became uneconomical to provide a special train but until the 1930's it was a requirement of the Ball Secretary to co-opt the Fremantle Railway Station administrators to expect the revellers for the last scheduled train out of Fremantle and the time of its departure was publicised at the Ball.

Another problem arose with regard to the Nurses from the Fremantle Hospital attending the function as there was a form of curfew imposed on the Nurses Quarters. However this was quite unofficially overcome by a few "blind eyes" and a few helping hands of oarsmen in passing nurses over a limestone wall. It was most fortunate for the Rowing Club that in those early days the spirit of the Ball was shared by the community and no harm was done and certainly none intended in any way. As the local community grew the atmosphere became centred on the function itself and among the people directly concerned.

The first Ball of 1888 set a pattern which became a tradition and was followed right through the years to the final event in 1961. A tremendous amount of work went into preparations over a period of about six months and involved all members of both Clubs. The night of the Ball was an exhilarating experience. On entering from the open triangle of the Building through the Gum Leaves and flags, the atmosphere was immediate and inescapable. 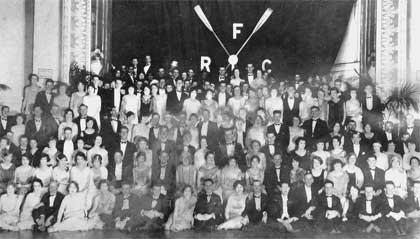 The ladies always wore ankle length frocks which gave a magnificent kaleidoscopic effect from black through the spectrum to white, and the men were smartly groomed in evening dress with quite a sprinkling of "tails".

The music was played by a full dance orchestra on a stage decorated with crossed oars, centred by a large light blue rosette, the Club Pennant for a backdrop and more flowers and palms.

The supper was a banquet, prepared and donated by local businesses and members of the Ladies Rowing Club. On the day of the Ball, under the direction of their President the ladies made, among other things:- an enamel tub full of fresh fruit salad, decorated the numerous trifle dishes, prepared crayfish, savoury eggs and small pastries, cakes and cream puffs. Finally the tables were set in the supper rooms made available, each table decorated in Club Colours with a model racing boat elevated on a light blue stand and with kewpies as oarsmen suitably clothed in light blue ribbon around their waists and with the coxswain invariably dressed in immaculately crochet cap and singlet.

The Annual Ball survived even the two World Wars when the ladies became involved in Red Cross activities. The 1940 Ball was held and the entire proceeds given to the local Branch of the Australian Red Cross Society. After 1945 the entertainment scene changed and the Annual Ball after lingering for two or three years finally succumbed after the 1961 event.