In 1982 Gino Chiarelli (Stroke), Trevor Mills (Bow) and David Jackson (Cox) won the Champion Maiden Pair for the Club, and this year became the first year that a Fremantle girl was awarded a state singlet, Sue Parker being selected a member of the 1982 W.A. womens open four. 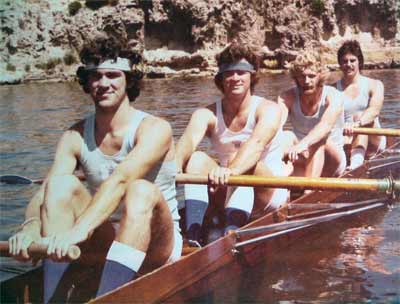 Competitive rowing for women which appeared to have been generated in the universities and started in the early 1970's and by 1974 Western Australia entered in the National Regatta Competition Womens events. In 1978 Zora Bryce joined the Fremantle Rowing Club and was responsible for organising the first competitive girls crew from the Club. Zora rowed for two seasons then coached the crews for another season. 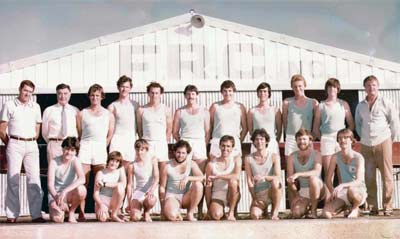 In 1984 Richard Burnell (Stroke), John Grulich (Bow) and Richard Melsom (Cox) won the Champion Maiden Pair and in 1986 a brilliant win for the Club in the Open Championship Pair was gained by Tony Lovrich (Stroke), John Bentley (Bow) and Bruce Hardy (Cox).

It was during these early 1980's that two figures had emerged as destined for greatness for the Club and also for Western Australian Rowing.

Gino Chiarelli a fine oarsman with many successes and an outstanding coach, became Treasurer in 1981, Captain 1982 to 1986 and not only initiated the movement to build a brick extension to the existing Club house on Preston Point but virtually became honorary builder. Although Gino received valuable assistance from past and present Club Members the building project would have faltered had he not been at the helm.

The other member of this period was Tony Lovrich who came to the Club after rowing No. 3 in the winning Scotch College Head of the River Crew in 1978. Tony was a reserve for the State Youth Eight 1980 which lost the race to Victoria by one half a metre. He rowed in the State Youth Eight 1981, the King's Cup Crew in 1982, and was W.A. representative in the Australian Sculling Championship (President's Cup) in 1983, 1984, 1985 and 1986.

Tony won his Australian Blazer for representation in International Senior "B" Sculls in 1982, International Senior "B" Double Scull in 1983 and Olympic Quad Scull (Los Angeles) 1984 in which latter event by rowing in the stroke seat and finishing a very close second he became the first Fremantle Rowing Club member to win an Olympic Medal. On these two men lie a lot of the Club's hopes as it moves into its second hundred years. 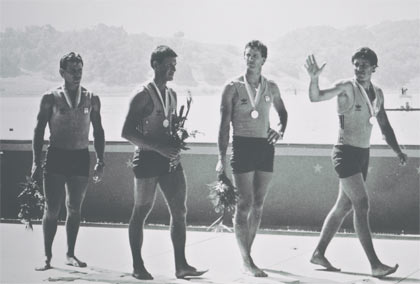 The Club has always endeavoured to foster a spirit of comradeship and conviviality which is embodied in the "Spirit of Rowing" the full meaning of which was given to members fortunate enough to be at the Annual Dinner held 8th October 1976 in an address by a former secretary of the Club Sir Daniel Sidney Aarons O.B.E. M.C. and Bar (16th Battalion AIF).