When the Club was reformed in 1946 the Minute Book of the time records with deep feeling the members who did not return. They were:

The year 1946 saw the fleet salvaged and repaired, new members recruited and the Pennant Competition resumed. The Club performed well, winning the following:

The successful crew in the Senior Pair events leading up to the Championship Event had been Ralph Jeffreys (Str.) and Jack Jeffreys (Bow) but five clays prior to the Championship event, Ralph was admitted to Hollywood Repatriation Hospital with a sudden attack of Malaria, his younger brother Jack took over, the stroke seat and Eddy Edwards rowed bow with Rodney Allan Cox. The altered pair after four practice rows convincingly won the Championship giving confirmation of the versatility of these two Kings Cup Oarsmen.

It was perhaps a coincidence that the following year (1947) after the Senior four had been successful with Allan Smith (Str), Jack Jeffreys (3), Ralph Jeffreys (2), Eric Smith (Bow) that Eric Smith had an attack of Malaria on the day of the race for the Championship but this event did not have such a happy ending as the Champion Pair of 1946. The Club was runner up for the Premiership Pennant in 1946 being represented in the Kings Cup Crew of that year by Eddy Edwards, Don Barratt Hill and Gordon Barratt Hill. 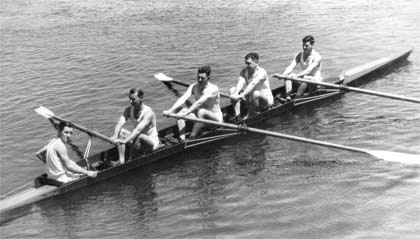 The years 1946-1949 formed the start of a new era for the Club. The pre-war men who rowed gradually retired from active participation but left behind a nucleus for Senior Rowing drawn mainly from the winning Champion Junior Eight of 1947 which comprised Trevor Darcy-Evans (Str), John Baird (7), Jack Marriner (6), Denis Cahill (5), Bruce Davie (4), Andy Cahill (3), Keith Wood (2), Ben Creighton (Bow), Ron Hughes (Cox), Gordon Gosper (Coach) together with Bruce Glaskin and John Humble who were promoted from the Maiden ranks.

The Seniors performed well in these years finishing second to W A. Rowing Club in 1947 Champion Eights and second to A.N.A. Rowing Club in 1949. During this time two strong and successful Senior Pairs emerged and as it was possible to boat only one crew in the Championship event it was decided to conduct a "row off" and Jack Jeffreys (Stroke), John Baird (Bow) won by a narrow margin from Bruce Glaskin (Stroke) and Denis Cahill (Bow). The successful crew with Denis Kestel Cox then went on to win the 1948 State Pair Oar Championship by three lengths. Jack Jeffreys had been the motivator in these Senior Eights and when he retired from active rowing at the end of 1949 interest in Senior Eights waned for a time.

The crews formed from recruits of 1946 and 1947 were followed in 1948 by an enthusiastic young "eight" of Allan Stagg (Str.), Don Ross (7), Lyall Gerring (6), Peter Cleaver (5), Kevin Mead (4), Clive Briggs (3), Harry Haywood (2), Irwynne McInerney (Bow), Denis Kestal (Cox) and coached by Ralph Jeffreys. This crew after four weeks rowing won the Novice Eight event at the 1948 Australia Day Regatta and were undefeated in the six novice eights of the Pennant Season that followed as well as providing oarsmen to win the Novice Four event on four occasions.

For the last Regatta of the Season and coached by Eddy Edwards the crew won the Champion Maiden Eight the only crew alteration being the substitution of Bob Semple for Kevin Mead in the No. 4 seat. At the 1949 Australia Day Regatta (non status) the crew won both the Maiden Eight and the Senior Challenge Eight and in the Pennant Season that followed, the eight oarsmen won six Maiden Eights, seven Maiden Fours, eight Maiden Pairs, two Junior Fours, 3 Junior Pairs and finished second to A.N.A. in the Champion Junior Eight.

After the close of the 1949 season the crew pooled their resources and decided to take part in the Junior Eight event at the Melbourne Henley Regatta on 26th November, 1949. Eddy Edwards (Coach) and Jack Warman (Cox) were unable to make the trip so George Rogers of the W.A. Rowing Club who was in Melbourne at the time offered to coach the crew for the race. This offer was gratefully accepted by the crew and for one training row George at 67 years of age actually rowed in the stroke seat and highly impressed the crew. The sports line in the Daily News of 22nd November 1949 read "- Grandfather sets the pace". The crew was defeated in the heat of the Henley race by a Sydney crew which went on to win the final. The crew won lead up Junior Eights in 1950 season and convincingly won the Championship Junior Eights.

During 1951 Season this crew rowed with reasonable success but had to lower its colours to University in the Championship. Alterations were necessary to the 1952 crew which comprised Ray Woodcock (Stroke), Bob Semple (7), Lyall Gerring (6), John McMeeken (5), Brian Anderson (4), Bert Ivey (3), Alan Stagg (2), Vic Millington (Bow), Don Slaughter (Cox), Eddy Edwards (Coach). Again although recording successes in the one mile lead up races, the crew finished second to University in the Championship. In 1953 Bob Semple (Str), Don Ross (7), John McMeekin (6), Peter Cleaver (5), Brian Anderson (4), Ross Riley (3), Lyall Gerring (2), Bert Ivey (Bow), Don Slaughter (Cox) and Eddy Edwards (Coach) convincingly won the Champion Junior Eight and followed up by winning the State Eight Oared Championship, thus registering the first win in this event since it became a feature event in 1907. The win also clinched the 1953 Premiership thus adding another to the years 1906 and 1939. 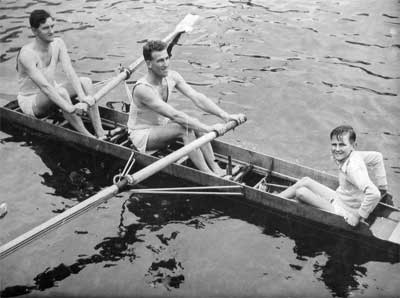 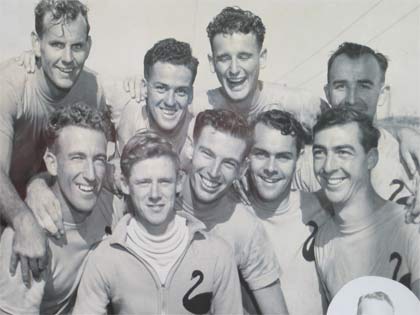 During this era it was Ralph Jeffreys who persevered and formulated the crews, taught them to row and looked after them in their early rowing, and as a result of his work, another crew graduated towards the top and in 1957, Bob Brealey (Stroke), Brian Coughlin (7), Peter Hall (6), Don Lewis (5), Gerry Denny (4), John Aylmore (3), Bruce Semple (2), Peter Willis (Bow), Brian Clarke (Cox), Ralph Jeffreys (Coach) won the Junior Eight Championship.