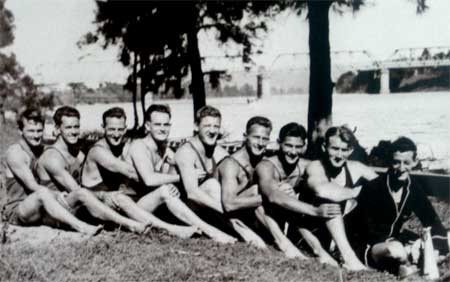 In these latter years of 1920's the Club was successful in Maiden Ranks and although not numerically strong won occasional races in the higher grades. It was not until 1931 when an idea of Fred Williamson and Bob Williams of a "learn to row" week was promoted and proved successful that there was any surge of membership. The main thrust of this promotion was a slide which was shown with advertisements during intervals at local theatres.

The slide showed an eight oared crew for the main part, and an invitation to learn to row free for a week, plus other relevant information. The eight oar crew featured on the slide went on to win the Champion Maiden Eight of 1931 and comprised Ken Capp (Stroke), Alan Riou (7), Jeston Richardson (5), Charlie Hugall (5), Jack Hugall (4), Eddy Edwards (3), Bob Jeffreys (2) and Syd Dalton (Bow) Gordon Pead (Cox) Ken Lewis (Coach).

The Club grew in strength and prior to the war breaking out had produced another three Champion Maiden Eights and another two winning Champion Junior Eights. During this period the Club was represented in Kings Cup Crews by Bob Williams 1932, Charlie Hugall 1934 and 1936, Jack Hugall 1934, Ralph Jeffreys 1937 and Jack Jeffreys and Les Moncrieff rowed in the 1938 winning crew. 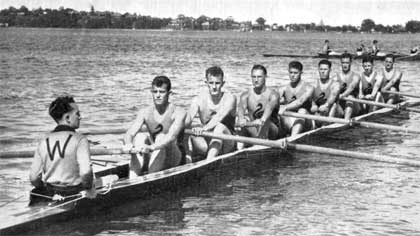 1939 saw the Club's best all round performance since it was founded in 1887, winning the Novice, Maiden, Junior and Senior Grade Premierships and were considered favorites for the Open Championship Eights, having won two out of the three Senior Eights.

War was declared a week before the Champion Eights Regatta. The majority of the members of the Club had been called up immediately for Service in the Navy, Army and Air Force and were actually in their respective camps on the day set down for the race. Other Clubs were affected also by service call ups and the Association abandoned the Regatta. The Premiership results were not altered because the Club was in the position that had they not won a race in the final Regatta they would still have won all four Pennants. 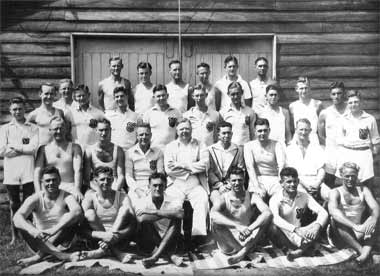 Winner of the Novice, Maiden, Junior and Senior pennants

1939 had seemed destined to be a good year as it commenced with the Regattas at Collie and Bunbury at which a party of almost 100 of both sexes attended. Two boarding houses in Bunbury were completely booked out for the Easter Period by the Club. The Club on 9th April 1939 at Collie won the Junior Four, Junior Pair, Maiden Four and Maiden Pair Four events of the seven on the Programme. The following day at Bunbury the Club won the Maiden Four and Novice Four - Two events of the four on the Programme.

It is hard to name individuals featuring in the building up of the Club in the years leading to 1939 because success can only be maintained by members working as a team, but perhaps no one would grudge a tribute being paid to Ralph Jeffreys who filled a major roll both on and off the water. The successful Crews were Senior Eight, Ralph Jeffreys (Str), Alan Riou (7), Jack Jeffreys (6), John Manford (5), Bob Higham (4), Roger Jeffreys (3), Vic Connell (2), Eddy Edwards (Bow) Laurie Whitbread Coxswain, Ken Lewis and Frank Shaw Coaches.

John Manford was called up for Air Force training and was replaced by Les Moncrieff in the second winning eight and actually Les Moncrieff was later himself called up by the Army and Ernie Davies was training in the crew for the Champion Eight The successful Junior Eight which culminated its season in the Junior Grade by winning the Champion Junior Eight was Ralph Jeffreys (Stroke), Alan Riou (7), Vic Connell (6), Roger Jeffreys (5), Bob Higham (4), Eddy Edwards (3), Jeston Richardson (2), Jack Critch (Bow), Laurie Whitbread Coxswain and Ken Lewis (Coach).

During the war the Club went into recess, some boats were loaned to Scotch College and the Dressing Shed was used by the American Naval Forces, who did quite a lot of work on the shed and kept it in good order.

The final entry in the Club Minute Book before it was closed for the 'Duration' gave a grim note about the state of the war and recorded as was best known the enlistments to that time as follows:

The President R.S. Jeffreys was serving with the Volunteer Defence Corps.