After the War the Henley Royal Regatta was held on 2nd to 4th July 1919 and the Annual Grand Challenge Cup Event was replaced by an eight oared race between crews from the armies of the allies. The event drew crews from Australia (2 crews) Canada, England (2 crews one from each Cambridge and Oxford Universities), France, New Zealand and United States of America The trophy for the race was a cup presented by His Majesty King George V. The A.I.F. No. 1 crew won the final by a length from Oxford University and the King's Cup (as it became known) was eventually handed by the Military Authorities to the Australian War Museum.

At a conference of State Rowing Authorities held in Brisbane on 14th May 1920, it was decided to endeavour to obtain the Kings Cup for use as a perpetual trophy for the Australian Eight Oared Championship. Several avenues were tried without success.

Finally the Victorian Rowing Association had a petition to the King drawn up and signed by Captain H.C. Disher (Melbourne University Boat Club) who had been stroke of the successful A.I.F. Crew. The petition set out the request and was sent on 30th October 1920. A reply dated 13th May 1921 was received from the Secretary for State for the Colonies Mr. (later Sir) Winston S. Churchill stating that "His Majesty commands me to inform you that it is his wish that the Cup should be used as a permanent trophy and be competed for annually in the Inter-State Eight oared Race of Australia". 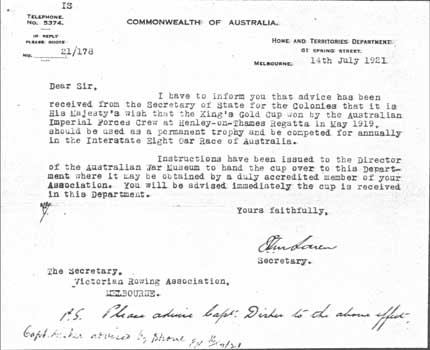 As a result the King's Cup was assigned to the Interstate Eight oared Event from the first post-war event held on the Brisbane River in 1920 and won by a famous crew of the era from Murray Bridge South Australia. The King's Cup became an added incentive to oarsmen aiming to take part in Australian rowings most prestigious event.

The first Interstate Eight Oar Championship was rowed in 1878 in Melbourne and although reduced under special circumstances, the distance of the race was three miles until 1960 when it was changed to the Olympic distance of 2000 meters.

The only Western Australian member of the famous A.I.F. Crew was Gunner George W Mettam of the W.A. Rowing Club. George was a member of a highly respected rowing family and was well known in Fremantle The publicity aroused by the outstanding win at Henley no doubt helped at Fremantle where the old members began to reorganise the Club. 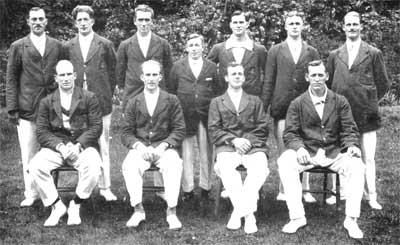