The race for Interstate Eights was set down for the Swan for 1912 and during 1911 Frank Shaw was appointed selector and coach. He experienced great difficulty and eventually had to appeal to the Fremantle Club to supply a crew. This they did by getting some past members to "came back" and the crew finally comprised Syd Mews (Str), E.G. Long (7), R.l. Browne (6), R.S. Jeffreys (5), J.J. Prince (4), D.S. Aarons (3), Marks Miller (2) and W. Taylor (Bow).

Fremantle and the Harbour in 1912

A crew composed entirely of Fremantle men was not popular with the Perth Clubs or a section of the press and hostile criticism was the general order of affairs culminating in a challenge from the sole selector and coach. He was prepared to race his crew (Fremantle) against any combination, the winners to have the honour of representing the State in the Interstate contest. The challenge was taken up by Perth clubs and Charles Horsburg undertook to select and coach a crew to challenge Fremantle but the project was soon abandoned, and Fremantle continued a strenuous preparaton. Everything was working well until Marks Miller (No 2) became indisposed and eventually withdrew.

The Fremantle Club could not produce a substitute. The coach appealed to Jim Child of the Swan Club and he generously agreed to fill the vacancy and was placed in No.6 seat. R.T. Browne rowed at No.2.

The reorganised crew formed a fine combination, became perfectly fit and did many excellent three mile trials. Previous hostile critics were won over and the crew was voted a good chance of victory. They were a heavy combination above the carrying capacity of the racer in any but smooth water.

The day of the race arrived and conditions were not propitious. A beam wind caused a nasty sea, and shortly after the start of the race the crew was in difficulties. Before a mile had been covered the boat swamped. The result was a great disappointment to Fremantle and it was felt the crew had not had the opportunity of displaying its true form and condition.

It was therefore decided to replace Jim Child, who had returned to his own club and contest the Senior Event at the Fremantle Regatta scheduled for June - practically three weeks hence. Child's place was filled by L. Noseda, a junior. The crew trained without incident and on 3rd June 1912 met a strong W.A. Club crew stroked by George Rogers. The day was fine and Fremantle leading throughout won most decisively to the delight of the crew and supporters.

Having fulfilled their undertaking - to see the Club through a difficult period - a number of the crew retired from active rowing. 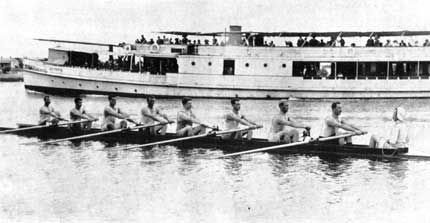 For the next two years the Club did not perform consistently in Regatta racing and on 4th August 1914 war broke out and the Club almost immediately went into recess.

Deep sadness is read into the minutes that record the names of the men having left Australia with the Australian Imperial Expeditionary Forces. The names recorded are as follows: