The Club at the beginning was prosperous and until about 1898 was quite an institution in Fremantle so much so that the first day of June was gala 'in Fremantle. On that day the Club held its annual Regatta, the finishing line being apposite the East Fremantle ("Wood") Jetty just higher upstream than the traffic bridge.

There were also races for boat crews from ships lying in Gage Roads, fishing boat races, races for crews nominated by various business houses, stern sculling races canoe races and other aquatic events including swimming, diving and greasy pig, whilst land events included an oarsmen's one hundred yards handicap, a tug of war a chase for a greasy pig. a treacle bun contest and other amusing events. A feature was the full brass band that played suitable music throughout the day. 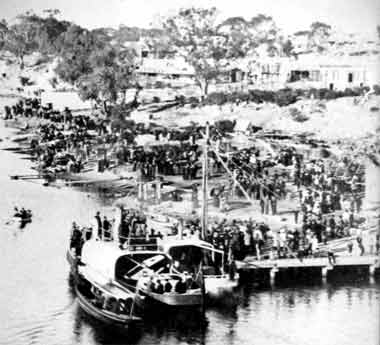 At the luncheon interval the Club tendered a dinner to prominent townsfolk. The Regatta started at 10am and concluded before dark, and was really "Fremantle Day" and in recognition of same the Government made a cash grant to the Club. Loral business houses such as Doig and Horn, F.E. Gibson, Charles May, Nicholsons, Pellews and Purser and Bousefield assisted with window displays of trophies and photos.

Dodgers were given out with the programmes at Vic's Pictures and Princess Theatre. The Fremantle Tramway Board allowed calico signs over the front and rear ends of their trams and at one time a large calico sign was displayed along the first floor verandah of the National Hotel on the corner of High and Market Streets.

It is interesting to recall that crews from the Perth Clubs usually rowed their boats down from Perth at some convenient time before the Regatta, and Fremantle rowed to Perth when competing there. Incidentally, it was the practice to row home after the Regatta and it was a common sight to see 'fours' towing 'pairs' home - a distance of twelve miles.

The years of the early nineties saw a great influx of population to the colony, and the Club grew rapidly. Among the new comers was George Harrison from the Richmond Club, Victoria. He was selected as stroke and P.J. Ryan rowed No. 3 to him. Prior to this A.G. Fyson had retired from active rowing.

Harry Adams, who had turned professional, rowed William Rose of Perth for a stake and was successful. He later sculled against William Willis of Fremantle and was defeated. The professional sculling races were rowed over a three mile course, starting at Keanes Point and finishing well into Rocky Bay. The course involved a bend of something like ninety degrees. 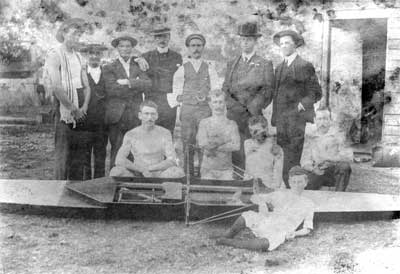 When Harry Adams relinquished the amateur status. Harry Blinco took up sculling and was very successful for a number of years. It was inspiring to see Harry Blinco driving an open pair boat with sculls from Bicton to the "Bridge". He was a man of powerful physique and somewhat of an idol in the Club.

George Harrison was Senior Stroke until 1895 when James Donald the king of Australian strokes arrived from Victoria. He was selected Senior stroke and had with him P.J. Ryan as No. 3, Jack Horsburgh No. 2, Jack Porteous Bow, Percy Shaw Cox. A wonderfully fine crew they were and won many races. 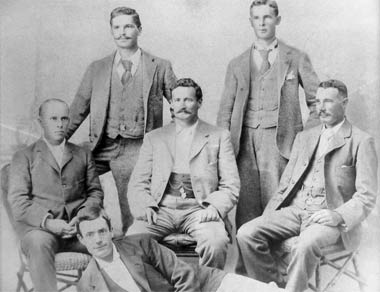 The standard of oarsmanship during the middle nineties was very high in this state. The sport was very popular with the public, so much so that it was decided to send an "eight" to Melbourne to contest the intercolonial eight-oared championship on the Yarra. Among those selected were James Donald, P.J. Ryan, J. Horsburgh and J. Porteous from the Fremantle Club. The race was rowed on 6 May 1897 and Western Australia was beaten by a narrow margin by Victoria, stroked by Alex Sloan. In the Champion Sculls however E. Powell won the honours for this Colony.

The members of the crew returned to their respective clubs and shortly afterwards participated in a monster Regatta at Fremantle known as the "Diamond Jubilee Regatta" that year being the sixtieth of the reign of Queen Victoria. No doubt it was the greatest aquatic carnival ever held in the colony. Shortly after this Donald and Porteous decided to return to Victoria. The former disliked sea travel so they push-biked across Australia, no mean task in those days. Donald resumed rowing in Victoria and won many races, including nine "Interstate Eights" later to become "King's Cups".

Other prominent members departed from Fremantle and their loss was severely felt. A decline set in and until 1903 the Club was in very low water. As a matter of fact by the end of 1902 the Club was almost defunct. Boats and paddles were in poor condition and matters generally were distressing. It was then that four young men not already members decided to make use of what was available and formed a crew for exercise rowing only. The men were Syd Mews, Jack Daer, Frank Tuohy and Jack Collidge. They co-opted Frank Shaw as cox and coach. Things proceeded slowly and then others joined in sufficient numbers to warrant an attempt to resurrect the "Old Club". The Press generally were more ready to assist in those days and valuable publicity was given to the F.R.C. Boats had to be obtained and money was necessary.

At that period Hamley Growden was Secretary, Bert Baker Treasurer and Frank Shaw Captain. The Committee decided to raise one hundred pounds by issuing twenty debentures at five pounds each at 5 % per annum redeemable in two years. The issue was a great success. All debentures were taken up in three days and immediately two practice fours were ordered from James Edwards & Sons, Melbourne. Upon their arrival at the Club a great function was arranged. One boat was christened "Angwin" in honour of Mr. W. C. Angwin M.L.A., a Vice President and keen supporter, the other boat was named "Growden" in honour of the secretary who had successfully negotiated the debenture issue.

The acquisition of the practice boats enthused members and also led to others joining up. It was then deemed necessary to acquire a racing four. Consequently an order was placed with James Edwards and Sons and in due course a very fine racer was received and christened "Strelitz" in honour of the President and former coach of the Club Paul Strelitz.

The members were now in a position to meet other clubs on equal terms and coached by Frank Shaw, a Junior Four entered and won the Junior Four event at the 1904 Annual Guildford Regatta and became proud holders of a handsome Cup presented by the people of Guildford. 1904 had been the Cup's inaugural year and it had been presented as a "perpetual trophy" with the only proviso that in the event of any Club winning the Cup on any three consecutive occasions, the cup would pass to that Club. Fremantle followed the 1904 success with further successes in 1905 and 1906 thus the cup became the permanent property of Fremantle Rowing Club and was placed in the custody of Frank Shaw who had coached all three winning crews. Frank remained custodian until 7th May 1942 whereon he passed the Cup to Ralph Jeffreys together with a document setting out its history. 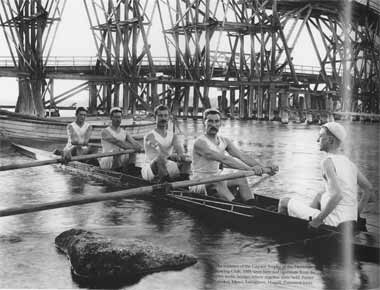 1905 Winners of the Gaynor Trophy at the Fremantle Regatta

This document read in part "we can justly feel that you may receive same and hold, disposing same at any time at your discretion. If this should be then I trust it will be in the interests of our great amateur sport, it will serve to bring home to you and your friends that 40 years ago the Fremantle Rowing Club was a virile club, we were up against tremendous opposition from Swans and Wests, but by honest work and application we overcame all opposition and prevailed".

In the time that followed, the Cup received an airing each year at the Annual Ball filled with glorious rose blooms in a centre display. The Cup at this time is still in the custody of Ralph Jeffreys.

It may be of interest at this point to record that in 1939 Frank Shaw as President of the W.A. Rowing Association had presented to Ralph Jeffreys as captain of Fremantle Rowing Club the first Premiership Pennant won by the Club since the memorable Premiership victory of 1906 which is referred to later. The Junior oarsmen who rowed for the Cup over the three years were Bob Brown. "Dolly" Christie, R.A. Dobson, W.J. Farrar, Hamley Growden, Jack Hugall, Tom Lovegrove, Alf Manuelle, Syd Mews, Jack Prince, Bill Taylor and H.T. Woods.

In addition to the Junior Four victories of 1905 and 1906, the Club in those two years also won the Senior Challenge Cup event, the successful crew on both occasions was Tom Lovegrove, Syd Mews, Bill Taylor and Jack Hugall with coach Frank Shaw. It is of note that the boats were not rowed to this Regatta but were transported per launch "Manx Fairy" which became affectionately know to the members as the "Hen Coop".