The Fremantle Rowing Club was formed on 19th July 1887 at a public meeting chaired by Dr. H.C. Barnett and held in the Oddfellows Hall in Fremantle. This public meeting had been called as the result of a motion by B.J. Solomon at a preliminary meeting which had been called to discuss the possibility of the formation of a Rowing Club in Fremantle. This preliminary meeting was held in the Fremantle Town Hall, (the Town Hall had been officially opened on 22nd June 1887) on Monday 11th July 1887 and was chaired by Douglas G. Gawler who must be credited with having initiated the movement for the formation of the Club.

Upon formation Douglas Gawler was immediately appointed Captain and he retained that position for nine years. Douglas had come from South Australia in 1856 and established in Fremantle and Perth a business of Barrister and Solicitor. He was a highly respected member of the Fremantle business community, a man of strong physique, had gained rowing experience in South Australia and had also been successful as stroke of a four oared gig at a Regatta conducted by the Perth Yacht Club on Tuesday 9th November 1886. Douglas Gawler entered several business partnerships finally becoming a partner in the legal firm of Gawler, Hardwick and Perman until in the year 1915 at the age of 55 years he met a premature death from typhoid Fever. 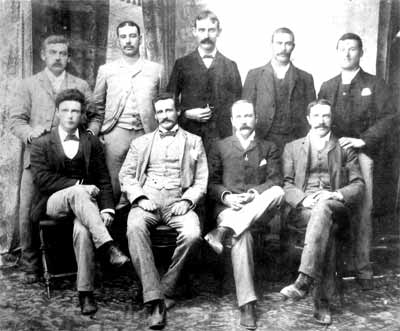 The Fremantle Rowing Club officially adopted the motto "Pull Together" and established its rules. Carried on by the wave of enthusiasm created by the founding members, the Officials of the Club arranged for a deputation to the Governor of the Colony. The deputation was presented by Mr. Marmion M.L.C. and sought assistance in obtaining a grant of land on which to build a boatshed The plan for the boatshed which had been tabled at the inaugural meeting of 19th July 1887 was for a building 70 feet long and estimated to cost 70 pounds. The building plan was taken along by the deputation.

The Governor immediately let it be known that he was pleased to encourage the establishment of Clubs such as Fremantle Rowing Club in the Colony. A site between the two bridge, over the Swan River at Fremantle and on the left hand corner of the south end of the North Fremantle high level bridge was suggested. The Governor agreed that the site appeared suitable and was not being used at that time. He then further agreed to have the matter placed before the Public Works Department for Official consideration. The grant of land and permission to build must have been acceptable to the authorities as the Boatshed was constructed on the site suggested by the deputation to the Governor.

The opening of this first Boatshed was an Wednesday 11th April 1888 and was held in conjunction with the first Intra Club Regatta and was reported in part by a local newspaper as follows: "The Mayor of Fremantle Mr. D.K. Congdon Mr. W.E. Marmion M.L.C., Mr. W.S. Pearse M.L.C., Dr. H.C. Barbett (President), Mr. R. Fairbairn R.M., Capt. Russell R.N. (Chief Harbour Master), Cr. R.N. Waldeck, Cr. J. Pearse, the Rev. J. Johnson, Rev. D. Glyn Watkins, Rev. O. Hanlin, Messrs. Macklin Compton, R. Birch, G.R. Woods W. Farmer, C. Pearce, B.J. Solomon (Secretary) F. Imray, R.B. Burnside, J. Herbert, Booker Durlacker and Flindell ......
There was the largest attendance of spectators seen at any similar gathering in Fremantle and the amount of interest shown in the days proceedings augurs well for the future prosperity of the Club. The weather was exceedingly fine, the water being calm and smooth and particularly suitable for good rowing while the bridge and banks of the river were thickly studded with spectators anxious to catch a glimpse of the various contests. .....

The racing was carried on with the greatest of enthusiasm while numerous parties embraced the opportunity of enjoying a sail on the river thereby giving the course a very animated appearance. ......At the conclusion of the racing the company adjourned to the Boat Shed where an elaborate array of refreshments was provided by Mr F. Caesar of the Richmond Hotel the newly established hostelry in this neighbourhood. The Official Opening then proceeded. The Richmond Hotel was built at the top of the road leading up to Queen Victoria Street from the riverside level, and it remained for many years and slaked the thirst of crews it was later renamed Bridge Hotel where one time mine host Ted Hoare continued to dispense the "one pot then home". Eventually the Hotel was demolished at the time of the up river development of the harbour.

This first boatshed remained for about nine years, when the Government, in order to erect a bridge in connection with the construction of the Fremantle Harbour Works, removed it to a site over the river some small distance down stream towards the rail bridge and still on the southern bank. This latter site remained until the following advice was received from Fremantle Harbour Trust dated 11th November 1960. "The premises now occupied by the Fremantle Rowing Club are situated on an area of land which will shortly pass in ownership to the Fremantle Harbour Trust. In conformity with the up river development proposals of the Inner Harbour, involving the removal of the existing railway bridge and its rebuilding up stream, you are advised that in the not too distant future you may be served with a notice to quit. You should therefore be seeking other premises." Demolition of the buildings subsequently commenced in September 1961. 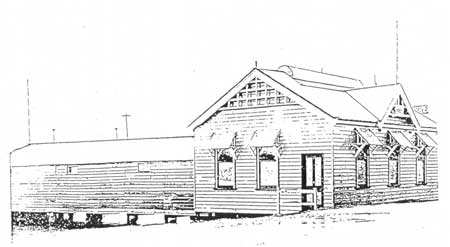 Original Boatshed over the river with club room added - 1909

The course used at the opening regatta in April 1888 was from "Sharps to the Wood Jetty" appears to have been up stream from Point Brown and the "Wood Jetty' was the old jetty near the eastern side of the North Fremantle Bridge on the southern bank of the river. It appears that a buoy was placed off Point Brown in order to keep crews in the stream as they negotiated the bend. The report of the regatta contained details of a protest by one crew following a clash of boats "on the bend".