The ELRC's early achievements were certainly important in the history of Australian women's sport and an inspiration to those who followed on towards the twenty-first century as the women rowers of today's ERC.

Australian women have participated in rowing since regionalism, although only privileged women were able to participate because of the expense. "Before the 1880s there were rather more sporting opportunities for upper-class women than for others ... Rowing and sailing were taken up by the daughters of wealthy families". (Cashman 1995, p. 86). By the time Australia began producing champion professional scullers such as Henry Searle, competitive women's sports became more popular. "During the 1880s and 1 890s ... there was an increase in Australian female participation in competitive sports." (Cashman 1995, p. 85) 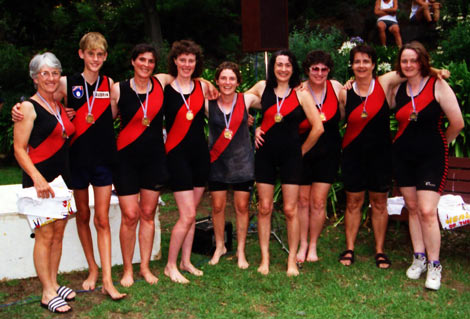 1997 winning Essendon Women's Masters Crew at Head of the Yarra

Although women had started to take part in the sport, it was not completely accepted in the social sense until generations later,

Rowing suffered from the social restrictions placed at that time (early 201h century) on women in all vigorous sports. It was not until the 1970's that this sport made significant progress, with women's events beginning to enjoy a much-enhanced status at the national regatta. By the 1980's women's crews were achieving significant success overseas. (Scott Bennett, 'Rowing and Sculling', in Vamplew et al. 1994, p. 357)

The success of the ELRC Coxed Four at the 1929 Australian Championship was certainly an important step in the right direction for all athletic women of that time. The ELRC ladies were proud the claim this unique victory in women's sport as their own for Victoria and of course for Essendon.

Forsyth described the current status of women's rowing at ERC,

... if you look at our club now, we've got something like thirty young girls or women ... rowing, and they're rowing in excellent boats and they're getting coached by quite a few coaches ... five coaches, lots of good boats. (Bottrell & Forsyth 2000, p. 12-13)

In the interview, it became apparent that while the women were making certain of their worth, the men's rowing had actually slid downhill. Forsyth explained,

... in light of the way men's rowing dropped off to a certain degree and women's kicked on ... (the amalgamation has) probably been beneficial to this club, because the women coming in have taken up the vacancy left by a certain amount of the guys dropping off. (Bottrell & Forsyth 2000, p. 13)

The author queried if the decrease in men's rowing was due to the amalgamation. Bottrell answered,

No, it seems to have been a rowing phenomenon right across Victoria if not the whole country ... I think it's a combination of ... competition, plus the whole rowing training techniques of virtually seven days a week for novices, is ridiculously too demanding. I mean people we'd got, got used to it, because that was just the way it was done, but when you're trying to attract young guys who have got umpteen other sports where they only have to train twice a week to choose from ... we're fighting a losing battle .... Men's novice training now has reduced down to probably three times a week, which is a big reduction on what it used to be in the seventies and early eighties. And I think that that's just a sign of the competition. You make a sport too difficult, too hard, there's too many other things for them to go into, so you've got to try and move with the times to some extent. (Bottrell & Forsyth 2000, p. 13)

Women in sport have certainly moved with the times. The ladies of today's ERC are not referred to as 'Essendon Ladies'. This is not only due to current sociological issues that have led to an altered use of the English language. The 'Essendon Ladies' are now remembered as a group of their own for who they were, for what they represented, as well as for what they did for rowing and for women's sport in general.

Today, the ERC women are included with the men and are sometimes categorised by their status, such as 'novice girls' or 'senior girls'. These women are achieving similar and sometimes higher levels in rowing than their male counterparts in novice to elite races. They have done this by way of winning state titles, premierships, and national titles and since 1991 they have also achieved Australian representation in lightweight sculling. 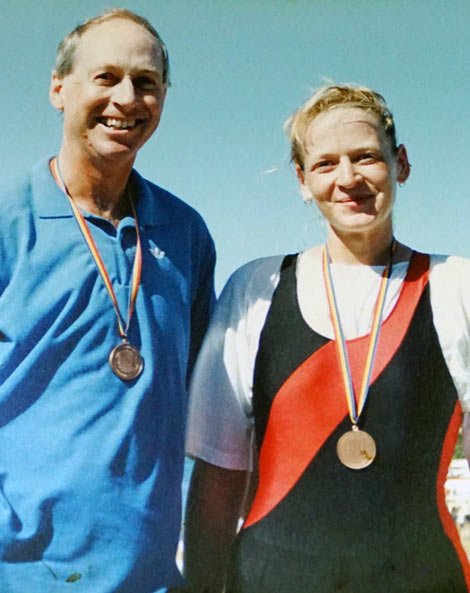