The ELRC was one of the most successful ladies rowing club in Victoria, especially in the late 1920s and 30s. Forsyth described a great milestone made by the ELRC, "The ELRC was the first club in Essendon and probably Victoria to bring a National Championship to the state of Victoria" (Bottrell & Forsyth 2000, p. 2). This information is supported by Maddigan and Frost who outline the club's achievements and also the celebrations that were made on the crew's return. 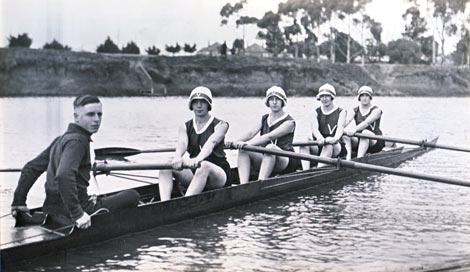 This achievement was also recorded in the manila folder Mr. Bottrell provided. It contained a single odd page taken from an unknown resource. The document was headed, "Record of the Women's Interstate Four-oared Championship of Australia”. It states that Victoria won this race in Perth, 1929; in Tasmania, 1933, in Melbourne, 1936 and again in Tasmania, 1939 (Bottrell 2000). It is also noteworthy that in the Annual Report of 1938/39, the ERC congratulated the ELRC for securing the title (ERC, Annual Report 1938139, no pagination).

The ELRC's success was during the-inter-war period, when the general attitude towards sportswomen was harsh.
In rowing ... women had often competed on the same program as men at regattas ... but this practice became uncommon by the late 1930s, largely because there were now so many events for men that male organisers claimed to have 'no room' for the ladies, a decision that reflected their patronising attitude towards the women athletes. (Daryl Adair, 'Rowing and Sculling', in Sport in Australia, p. 184, in Adair & Vamplew 1997, p. 53)

During Forsyth's active rowing days, the ELRC also won an Australian title in the schoolgirl fours. In his view "some of my memories in the early seventies is ... they were quite successful in winning schoolgirl championships" (Bottrell & Forsyth 2000,
p. 2). Bottrell also remembered this and has in his possession a photograph of the crew. "I've got a photo at home of the crew that won the Australian National Schoolgirl's title for the ELRC in about 1972/73" (Bottrell & Forsyth 2000, p. 3). Forsyth added, "I remember them actually winning a state schoolgirl's title in the mid-seventies ... they had a couple of top crews in the sixties ... that won many races, including the Australian Championships." (Bottrell & Forsyth 2000, p. 3)