To the members of Sydney Rowing Club, past, present and future. 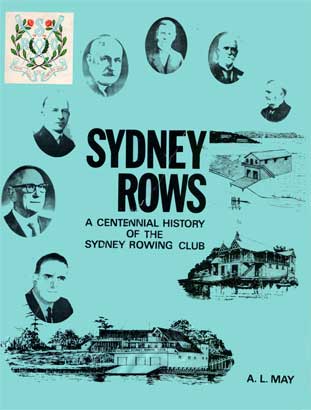 The dust cover of the history

The cover of the history: Presidents and property. The seven club presidents (from right to left) George Thornton, Q L Deloitte, Clarrie, Smith, Andrew Sneddon, Harry Kerr, Fred Meares and George Parlby. Also shown are the first boatshed at Circular Quay, the first boatshed at Woolloomoolloo Bay and the property at Abbotsford at the present time.

This history has been reproduced with the kind permission of Sydney Rowing Club.

This rowing history has stood the test of time - it is very well written and it remains a great reference for rowing.

This book was written by Alan May. Alan was born in Sydney in 1939 into a rowing family, his father Geoff having won the Kings Cup for NSW in 1933 and 1934. Alan rowed in the 1956 Head of the River for Sydney High School, then joined Sydney Rowing Club. He coached the winning SHS second four in 1963. He was Treasurer of SRC until he moved to the Philippines in 1968 to take up a position with the Asian Development Bank as an economist. He died there after a long illness in 1989.

He also wrote 'Manila Rows', which traces the history of the Manila Boat Club, which club he revived from dormancy.

Alan May whilst in Manila

Sydney Rows is the history of a proud and honoured 100 years of unbroken rowing activity by the Sydney Rowing Club and it is appropriate that our sincere thanks be tendered to its author, Mr. Alan May.

When the project was first discussed with him some two and a half years ago, it was not fully realised what a marathon job it would be to spend many painstaking hours at the Mitchell Library and the Public Library of New South Wales checking over old newspapers and others records, to interview and correspond with many club members and to gather together information and photographs to fit into the framework of the history.

Apart from all this preliminary work, the even greater task of actual writing had then to be undertaken. These problems were multiplied when, eighteen months ago, Alan was offered and accepted a position in the Philippines which immediately meant that the history was carried on thenceforward by a form of remote control.

The result is, however, very satisfying indeed. Here are no dull pages boasting the present against the past, but rather a complete 100 years of rowing history revealing, particularly, the comradeship which rowing peculiarly engenders.

After reading the manuscript, it is obvious that Sydney Rows will prove of great interest not only to members and past members of Sydney Rowing Club but to all those who have been involved in the sport of rowing in Australia. This is because Alan has, very wisely, written on a broad front touching on the history of other rowing clubs, interstate and international rowing, school and women's rowing and even professional sculling.

We are proud of our past and Sydney Rows clearly justifies this thinking. I am sure that I speak for all by stressing, once again, our thanks to Alan and by offering our congratulations on a very considerable achievement.

> next Preface and Acknowledgements