The GPS rowing decade commenced with a further organizational change. Following the problems of the 1920 event, the authorities decided to have heats of the 1921 regatta on a Wednesday and the finals on the following Saturday. Newington entered an eight for the first time, coached by Roy Barker, and was successful at its first start in the big race. Grammar beat Shore by 1/4 length only in the 1922 regatta and won again in 1923. L. C. Robson commenced coaching Shore in 1923: within twelve months the experts were saying of Shore that "as far as style is concerned they are easily the best eight on the river". 1924 was notable for the completion of the hat trick by Grammar in the big event and for the first entry of Sydney High School in the regatta. High entered crews in the lst and 2nd Fours and won the former by 4 lengths. Spurred by this success, High entered an eight in 1925 and, despite the fact that Grammar started clear favourites, High "practically stood in a class by themselves" and won by 3 lengths before a crowd estimated at 100,000.

The school rowed from Glebe's shed and was coached by Glebe's captain, George Hancock. In 1926, High won again, albeit by 2 feet from St. Joseph's, and in 1927 they too performed the hat trick, beating Grammar by 3/4 length. Shore was back into prominence in 1928, winning not only the Major Rennie trophy but also the lst and 2nd Fours for a clean sweep. (Unofficial races for 3rd and 4th Fours were also held and Shore won those as well!) In 1929, High won again, beating Newington by 3 feet, and in 1930 High was again first past the post for the fifth time in six years. In a sensational decision, however, High and Grammar were first disqualified and the event later declared "no race". Allegations were made that members of the two crews had devoted more time to rowing than was consistent with their school work and that this savoured of professionalism.

Cranbrook School commenced rowing in 1921 and soon opened a shed at Double Bay. Crews were unable, however, to take part in the GPS races, and individual schools showed little interest in challenge races. Boys from St. Aloysius' commenced rowing as members of Mosman in the 1926/27 season and, a year later, were permitted to affiliate with the Association as a separate club. There were no further reports of rowing by high schools, other than Sydney High School, during the decade. 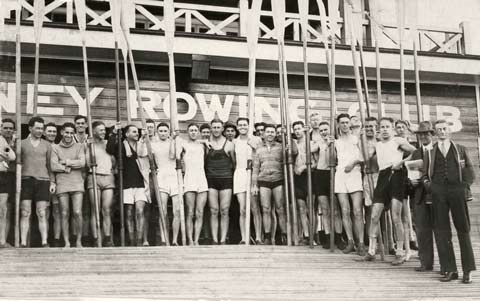 A keen group of Sydney members in about 1928

Rowing by women was much quieter during the 'twenties. Sydney Ladies' and a Leichhardt club showed most activity in the early years, but stimulus was received in 1928/29 when the NSW Women's Rowing Association was formed. A Balmain and a "City Girls" club were formed, while the YWCA club was also revived. Following an internal dispute within the Sydney Ladies' in 1929, a breakaway group formed the Abbotsford Ladies' Rowing Club.

In interstate rowing, SA appears to have had most success, winning in 1921 and from 1924 to 1927. Sydney Ladies' staged the 1922 event and provided the State crew as well but finished fourth in the race which was won by Tasmania. Victoria won the Perth race in 1923, with NSW absent. NSW was back on top in 1928, the crew being stroked by the outstanding Rose Goodman. In Perth, in 1929, poor steering allowed Victoria to beat NSW by a foot but in Adelaide in 1930 the NSW crew won again. The only action on the professional scene was from the Double Bay and the Balmain ladies but, after 1923, their activities died out too. 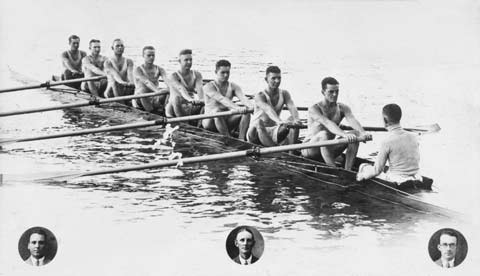 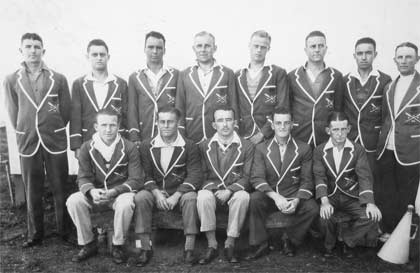 The NSW team of 1930 including the all Sydney eight.

An Australian Amateur Rowing Council finally came into being during the decade. The desirability of such a move was confirmed by the 1921 interstate conference and a draft constitution was put before the 1923 meeting. The NSWRA then opposed the proposal on the grounds that "the present arrangement is the most satisfactory", but decided to leave the matter to the discretion of the delegates.

At the 1924 conference, the AARC was finally approved. It was to be composed of one representative of each Association and was to meet annually at the King's Cup time and site, and otherwise as necessary, to arrange, prepare and regulate Australian representation in international events and determine the policy and rules governing the King's Cup and other interstate championships. The actual arrangements for each carnival were to be in the hands of the particular Association in whose State the King's Cup was being held.

It was also resolved that decisions would be binding on all States if ratified by two-thirds of the States. The constitution of the AARC, drawn up by E. C. Watchorn of Tasmania, was adopted by all States except Queensland, which objected to the clause allowing a majority decision to bind all States. The first meeting was held on 4 May, 1925, Queensland being absent. NSW was represented by the hon. secretary of the RA, S. A. Maxwell, while Watchorn was elected the first president and chairman and Edward Kenny of Victoria the hon. secretary.

To meet the Queensland objections, the 1926 conference resolved "that no affiliated Association shall be bound to contribute towards expenditure for purposes other than Interstate Races, unless a motion for such expenditure has been agreed to unanimously". Queensland thereupon joined the Council.

Several matters of significance were considered by the Council in the remaining years of the decade. One was the wish of NZ to send a crew to race Australia in either 1927 or 1928. The Council resolved that, while races were desirable, the financial obligations of the King's Cup and Olympic representation prevented acceptance. State Associations remained free to conduct any races with NZ at their own expense. (NZ promptly invited both the NSWRA and the VRA to send crews, with all expenses in NZ being found, but neither was able to accept.)

Uniformity of status rules throughout the Commonwealth was considered at the 1927 conference but the matter was allowed to drop as, with conditions varying between States, the proposal appeared impossible. A Queensland move to reduce the distance of the eights race to two miles was also considered and was defeated.

At the 1929 conference, Victoria proposed, and was supported by NSW, that the King's Cup races be held each second year instead of annually. There was even discussion about alternating the interstate race with the intervarsity race once each two years. The move was defeated but, with the effects of the depression being felt, a similar proposal was brought up by Victoria and Tasmania at the 1930 meeting and it was decided to row the next two races in Melbourne in 1932 and in Brisbane in 1934, reverting thereafter to an annual event.

Once again, a range of subjects concerned the NSWRA itself during the decade. The capitation fee payable by members of clubs was raised from 2/6 to 5/'- in 1920/21, due to the increased costs of financing interstate trips. Nevertheless, the Association continued to rely heavily on donations each year to meet the interstate crew's expenses.

Further consideration was given in 1921 to the obtaining of a boatshed on the Parramatta, especially to house its own craft. No appropriate site seems to have been available and the matter dropped. In April, 1922, members of associated or affiliated clubs wishing to become members of another club were required to obtain the Association's sanction, via a reporting sub-committee, before transferring their membership. Opposition to the principle of such transfers except where the member changed his place of living, etc., was expressed the following year.

From 1925, boat race officials were appointed by the RA committee, rather than elected at the annual meeting. Clubs often, however, "requested" certain officials only for their regattas. 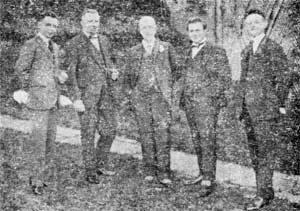 Coaching and country clubs were among the matters reviewed by the RA. A conference of coaches was held in October, 1924 to discuss the faults and weaknesses in the standard of rowing in NSW. A sub-committee of five - Fitzhardinge, Helsham, Pearson, Kolts and Cyril Callaghan - was appointed to revise the Association's book of instructions and an amended publication was issued in 1925. The coaches' committee also made a number of other recommendations, including the use of swivels, which had been tried earlier but discarded in favour of poppets.

In 1925, a meeting of three Clarence River clubs, Grafton, Maclean and Ulmarra, was held and they proposed establishment of a special definition of a country amateur in which the stress would be on rowing as amateurs with professionalism in other sports disregarded, as they remained unable to accept the Association's definition of an amateur. The attempts ended as before without success.

On the death of Deloitte in 1929, Geoffrey Fairfax was elected president of the Association. Fairfax died, however. in April, 1930. The chairman of the RA in 1920/21 was Bill Hence and he was succeeded in 1921/22 by Harry Alderson, the former secretary. Alderson retained the position throughout the decade and, indeed, to the present time. In 1922/23, Eddie Buckley commenced a term as honorary treasurer which was to last for 21 years. The Association conducted a ball in 1923, as a fund-raising effort, and continued it each year until 1928.

Professional sculling continued amid lively interest throughout the decade. Ernest Barry visited Australia in 1920 to race Felton for the title on the Parramatta. A crowd of some 100,000 saw Felton lead early, a foul occur, Barry dash away, and Felton prove quite unable to recover any ground. Arnst promptly challenged Barry and, in something of an anti-climax, he gained the title by forfeit when three months passed without Barry accepting a challenge. 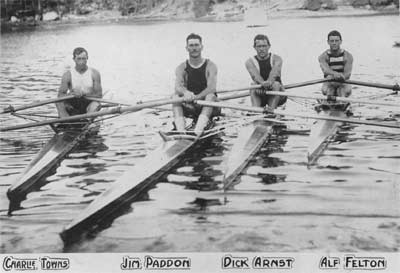 Arnst's first challenger was Pat Hannan of NZ whom he easily beat in June, 1921. Against Darcy Hadfield, the former NZ Olympian and amateur champion, however, it was a different story, and Arnst was beaten by 10 lengths. A match between Hadfield and Jim Paddon, the Australian champion, was then arranged. Paddon won well by 9 lengths and, in July, 1923, won a rematch on the Richmond River by 12 lengths.

Paddon defended the title successfully against both Felton and Goodsell but allowed Bill McDevitt to take the title from him by forfeit. Goodsell promptly challenged McDevitt and scored an easy win. Challengers now appeared from everywhere - Hannan, Hadfield, Tom Saul and even Paddon himself. Hannan disposed of Hadfield in a race in NZ and became the first challenger. In June, 1925, Goodsell beat him by 3 lengths on the Parramatta. Before the end of the year, the 25-year-old Goodsell had also met and beaten the 39-year-old Paddon, but only by 1 1/2 lengths.

In May, 1926, Goodsell had the easiest of wins over Saul to remove all possible challengers. He left soon after for overseas and his next match was in Canada against Bert Barry, nephew of Ernest Barry. They raced in September, 1927 and Goodsell had an easy 12 length win. In a rematch early in 1928, however, the roles were reversed, with Barry scoring an easy win. Several attempts by Goodsell to obtain a rematch in North America failed, and no match took place until May, 1930 when Barry met the 21-year-old Ted Phelps in London. Phelps emerged as the new champion.

The NSW Rowing and Sculling League was resuscitated in 1923. Its members were then the Parramatta River Professional Sculling Club, the Hunter River and George's River clubs, the Double Bay ladies and the Balmain ladies. Within a year, the newly-formed Sydney Professional Sculling Club, with Milton Kent captain, and the Port Hacking and Sylvania clubs had also become members. Enthusiasm then declined somewhat, especially after Goodsell and the title went overseas but, at the end of the decade, the newly-formed Pittwater Aquatic Club was striving to revive the League once again. The strains of professional sculling gave no appearance of affecting adversely those taking part in the sport. In 1921, the deaths of Dick Green at 85 and Peter Kemp at 68 were mourned while, in 1922, Mick Rush died at 79.