GPS rowing continued uninterrupted by the war. St. Joseph 's scored its first win in the 1911 regatta, beating Grammar by 2 feet. In 1912, Grammar won both the eights race and the Yaralla Cup for second crews, its latter crew being stroked by L. C. Robson. It was Shore's turn thereafter, the school's crews - still coached by Ramsay - recording wins in 1913, 1914 and 1915. St. Joseph 's won again in 1916. A race for third crews was introduced in 1917, a year in which Savigny's Grammar crew, still rowing from SRC, regained the GPS title. Scots entered the eights for the first time in 1918, but trailed the field with Grammar beating Roy Barker's St. Joseph 's crew into second place for the second year in succession. Grammar completed the hat trick in 1919, beating St. Ignatius' by 2 feet only. A big crowd was again in attendance but many rowing supporters were urging the holding of the races on a Saturday and not a Wednesday. The GPS authorities agreed to this for the 1920 regatta and King's entered an eight for the first time. There was, however, much interference on the river and, with the winning post only 200 yards away, Grammar, Shore and Scots, leading together with Riverview, collided. The umpire, Bill Middleton, stopped the race and, amid vigorous discussion, it was rerowed on the Monday. This time King's beat them all!

Activity was also taking place among the high schools, largely due to the keen encouragement given by the RA. During 1917 and 1918, Sydney High (also a member of the GPS), North Sydney , Fort Street , Sydney Technical and Petersham Commercial all commenced rowing, using the facilities of established clubs. Expectations of a high schools championship were born but the initial enthusiasm soon died.

It was an exciting decade for women in rowing, one also little disturbed by the war. Gertrude Francis (nee Lewis) continued to dominate the scene in the opening years of the decade. She defeated four challengers during 1911-1912 to hold her champion sculling title and to pick up stake money as well. In May, 1910, the first amateur club - Western Suburbs Ladies' Rowing Club - was formed and commenced conducting races for its members. One of the club's coxswains was a lad named Arthur Chadwick who was destined to be closely associated with rowing for many years. 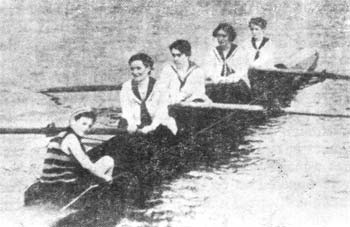 In 1913, the St. David's Ladies' Club commenced and the Western Suburbs ladies were provided with further competition. As time went on, the ladies progressed from double sculling in pleasure skiffs to sliding seated outriggers. Western Suburbs ordered a four in 1913, concerned perhaps that women's rowing in other States was more developed than in NSW. By 1914, the Glebe Ladies' Club and a YWCA Club had also been formed and were competing with the other two. The Balmain District Ladies' Sculling Club commenced in 1915 and showed considerable activity, while the Olympic Ladies' Rowing Club was formed in 1917. Towards the end of the decade, the name of the Western Suburbs club was changed to Sydney Ladies' Rowing Club, and use was made of portion of the SRC shed.

Professional ladies' clubs also soon commenced. The Pioneer Ladies' Professional Sculling Club was formed in 1913 and Double Bay Ladies' Rowing Club commenced in 1915 (using Harry Pearce's boatshed at Double Bay ). Interstate contests commenced in 1912 when a Queensland crew defeated Albert Park in Melbourne and repeated the effort the following year in Brisbane. In 1919, a Victorian crew visited Adelaide but was beaten by the locals. In May, 1920, NSW, SA and Queensland raced in Brisbane with SA being successful. The Australian Women's Rowing Council was formed on the same occasion.

A number of matters of significance arose at the conferences which were held in conjunction with each interstate race. In 1913, it was agreed that NZ could compete in the interstate event, provided it adopted the amateur definition and provided States were not obliged to reciprocate visits. (NZ oarsmen had to be amateur as far as rowing was concerned but could take part in other professional sport.)

The 1920 conference agreed to request the Australian military authorities to make the King's Cup available as a perpetual challenge cup for interstate eight-oared races. Also in 1920, a move was made to reduce the distance of the interstate race to two miles, but the three mile course was favoured as a better test of stamina. No further progress was made in forming an Australian Rowing Council. Efforts to get an English crew to visit Australia also proved fruitless. In 1913, the Governor-General himself wrote to the ARA on behalf of the NSWRA and the VRA asking them to allow a club to accept an invitation to row at Henley-on-Yarra and on the Parramatta . In 1914, the Henley-on-Yarra Committee invited Thames Rowing Club to make a visit, but the invitation was declined.

No Australian oarsmen were sent to the 1920 Olympic Games in Antwerp . While time to organise a crew was a major problem, the VRA indicated that they were opposed to competing at the Games, "where conditions were not always satisfactory", but favoured competing at Royal Henley. 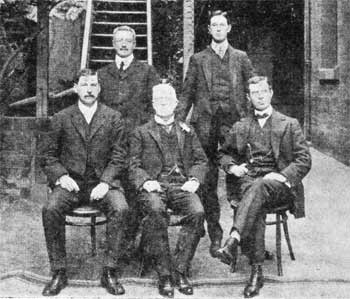 The executive officers of the NSWRA in 1911

There was little activity for the NSWRA during the war years. Lack of the annual drain on its funds from the interstate race meant, however, that its financial position was fairly sound. To ease the burden on the clubs, capitation fees were waived from 1915/16 and, a year later, delegates' fees were also cut from £2 to ₤ 1. Charges were restored to their old level at the end of the war.

The affiliation of country clubs was considered again in 1912. The furthest the Association felt it could go, however, was to reinstate as amateurs those who had never won or competed for a cash prize of more than ₤ 10 and who would undertake never to compete again for cash prizes of any amount in any sport. This remained unacceptable to Grafton and the other country clubs, the popularity of Rugby League in their areas aggravating the former problems. Nevertheless, in 1914, further efforts were made to secure the affiliation of the northern river clubs and visits to the clubs were paid by Association members. In 1915, Wagga Wagga Rowing Club did affiliate with the Association, all its members complying with the amateur definition.

In 1911/12, the RA considered the purchase of a site and the erection of a boatshed on the Lane Cove or Parramatta River , but financial problems led to the matter being deferred. The lease of space at Towns' shed was renewed for a further five years early in 1914 but, in 1919, was allowed to lapse. 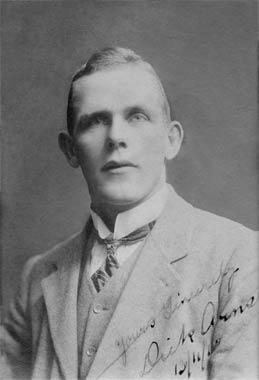 Competition for the world professional title continued. In 1911 Harry Pearce, the Australian champion, challenged Arnst and, before some 80,000 people on the Parramatta River , Arnst held his title with a 4 length victory. Ernest Barry induced Arnst to visit London to race for the title and £1,000 in 1912. Barry promptly won to record the first English victory since 1876. Barry accepted a challenge from Pearce and then disposed of Durnan while funds were being raised in Sydney to send Pearce away. They met finally in July, 1913, with Barry the victor. 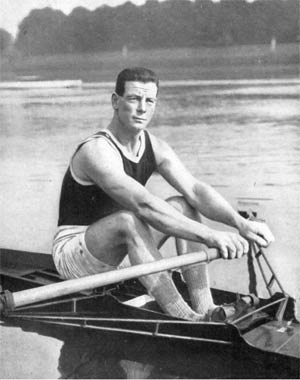 Pearce had had to leave his Australian title at home, by default, and Alf Felton beat Charles Towns in a match for it. Felton was promptly beaten by Jim Paddon who went on to defeat Arnst in a match and to challenge Barry. Paddon duly made the trip to England only to suffer the same fate as Pearce before him. At the end of the war, interest in the title revived and Paddon, Arnst and Felton all sought matches with Barry. Felton's challenge was accepted and the race took place in October, 1919 on the Thames . Felton beat the favourite by 6 lengths to return the title to Australia . A great gathering of old scullers and rowing men welcomed him back to Sydney after his victory.