The opening season of the decade had a number of interesting aspects. The fate of the Balmain Regatta, for so long held to honour the birthday of King Edward VII, became a doubtful quantity after the King's death. The regatta was held, however, with Balmain club showing great strength. Balmain also won the champion fours of NSW but, in the champion eights, Balmain, Sydney and Glebe all swamped in the difficult conditions leaving Enterprise to beat Leichhardt for the title.

John Towns, rowing for Sydney, beat Priddle of Balmain in the champion sculls, with the four other starters not finishing. Two other races proved interesting. In the junior eights at Sydney University's regatta, Glebe and Balmain dead-heated and a re-row took place a week later. It was won by…University, which had been unable to obtain a boat the week before and was allowed to start in the re-row. In the maiden eights at Sydney's regatta, St. Joseph's caused a shock by defeating five club crews.

Following his success in 1910, Roger Fitzhardinge was again appointed sole selector of the State eight for 1911. Only three of the 1910 crew - Hauenstein, Middleton and Barker - gained selection, with John Ryrie (Sydney), A. B. Doyle (University), Tom Parker (Balmain), Keith Heritage (Sydney) and Fitzhardinge himself completing the crew. 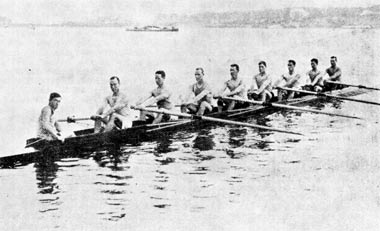 The winning NSW interstate eight of 1911

Heritage had rowed previously in Tasmania, and was a member of the winning Tasmanian eight in 1906. Ken ("Didger") Waley of University was selected as coxswain for the fourth year in a row, with Bill Middleton in charge of coaching. The crew impressed in its training and, in the race itself on the Parramatta, NSW beat Victoria by 2 1/2 lengths with Tasmania close up third. McVilly took the sculls again, beating Towns by 6 lengths. To make the NSW win even more exciting, the interstate conference on the day before the race had decided to institute enquiries overseas about a crew visiting Stockholm for the 1912 Olympic Games. The NSWRA soon met and resolved to send an eight and a sculler to the Games.

Plans for the forthcoming overseas tour dominated the 1911/12 season. Sydney's oarsmen were sparking well, and the senior four of Fitzhardinge, Heritage, Middleton and Ryrie took the senior fours at the Balmain Regatta and then the champion fours of NSW by no less than 6 lengths. The champion eights were held in December, 1911 with Balmain beating Sydney's crew by 1/2 length. This regatta was also marked by the first appearance of a crew from Mosman - which duly proceeded to win the maiden fours by 3 lengths. Harold Alderson was a member of the crew.

The VRA had agreed to cooperate with NSW in sending a crew to Stockholm and urged the formation of an "Australian Rowing Club" which the members could join so the crew could also row at Henley Royal Regatta. This was impractical, however, Henley rules demanding that clubs represented be at least a year old. NSW remained determined to proceed and asked other States to bring the 1912 interstate race forward from May to March so that a crew could race in Perth and go on to Sweden. This they could not agree to but it was suggested that NSW could miss the race without losing its turn or that a second crew might be sent. 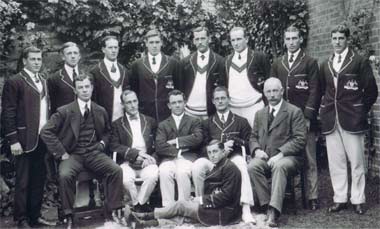 The 1912 Australian eight before departure

The squad for the Games was soon selected. The NSW selectors, Fitzhardinge, McGregor and McDonald chose twelve oarsmen, ten from NSW and two Victorians. The NSW group included all members of the 1911 eight plus Stewart Amess of Balmain and H. K. Ward, stroke of the 1910 crew. The Victorians were two Melbourne University men, Simon Fraser and Harry Ross-Soden (reportedly "nominated" by the VRA for the crew). Ross-Soden was a member of the 1911 Victorian eight. Bill Middleton was to coach and Waley to cox. Cost of the trip was expected to be about £2,000 with about £600 expected to be forthcoming from Victoria, principally from the wealthy Henley-on-Yarra committee.

Early subscriptions in NSW proved very encouraging. Local Sydney rowing - including Enterprise's first-ever regatta - now paled into insignificance. Doyle and Ward were already in England, but the eight New South Welshmen and the two Victorians commenced training in Sydney in February 1912. With five members of Sydney Rowing Club in the squad, it was decided that the other members should also join to satisfy the English rules.

Alex Thomson, hon. secretary of the NSWRA and an enthusiastic supporter of the project, was appointed manager of the crew, while Vic Horniman, a long-time rowing man, had been appointed overall manager of the entire Australasian Olympic team.

The winning boat in both 1910 and 1911, the Q. L. Deloitte, was packaged up and despatched overseas. The Association's second (and newer) eight, which had been sold to St. Paul's, was resecured from the College and was also despatched in case of damage to the Deloitte. Finally, in mid-April, 1912, the R.M.S. Osterley left Sydney for London with the Olympic crew on board to a fine send off from many supporters. A great reception awaited them in Tasmania, where McVilly, the sculling champion, joined the ship, and again in Melbourne and Perth.

NSW was represented in the 1912 interstate race. Balmain, which had also won the 1912 Gold Cup, obtained the sanction of the RA to have a crew sent to Perth for the contest and set about raising funds. The crew selected included six of their members and one each from Leichhardt and Enterprise. Another tremendous Perth crowd - 50,000 people - watched the race and they saw Victoria return to the winning list, beating Tasmania by 2 lengths with SA third and NSW fourth. WA swamped when well behind. Henry Green of NSW won the sculls as he pleased, beating Jim Rogers of WA and Coverdale of Tasmania, the hot favourite, who was thrown into the water after travelling only 50 yards.

Interest now focussed again on the Australian oarsmen overseas. A challenge had been sent for a Leander Rowing Club or an all-England crew to race the Australians on the Thames after the Olympics. When it was learned that neither would be possible, the necessary arrangements were made to have the eight compete in the Grand Challenge Cup at Henley as Sydney Rowing Club instead (objections to Hauenstein's amateur status - he was a policeman - being overcome). When the crew commenced training on the Thames, much interest and comment centred on their style which, in some quarters, was almost ridiculed. Such views were soon to change.

The crew chosen for Henley was Ryrie (bow), Fraser, Heritage, Parker, Hauenstein, Middleton, Ross-Soden and Fitzhardinge (stroke) with Barker emergency. They drew the Argonaut Rowing Club from Canada in the first round. Rowing in light blue with the Australian coat of arms, "Sydney" started at 40 compared with their opponent's 46 and were a canvas behind after 1/4 mile. Maintaining their rate, they drew level at the 1/2 mile and slowly forged ahead thereafter to win by 1 1/4 lengths. 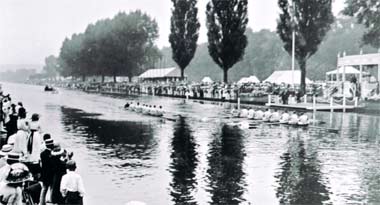 SRC defeats Leander in the final of the Grand

In the semi-final they met New College, Oxford (with Dr. Ward rowing in the New College crew) and, as the Sunday Times put it, "the Colonials practically led throughout and again won comfortably". There were 150,000 people present at the final of the Grand, including the King and Queen, who travelled up the course in the 200-year-old Royal Barge. The Sydney crew met Leander and after 1/4 mile the crews were level. The Australians then got on top and were 1/4 length ahead at the 1/2 mile. As the race progressed, they drew further ahead and won by 3/4 length, the time for the Henley distance (1 mile and 550 yards) being 7.06. Deloitte himself was among the Australians to see the crew win in the Q. L. Deloitte, his vantage point being no less than the umpire's boat together with the King and Queen. McVilly fared less well, being beaten in his opening heat by 6 lengths. 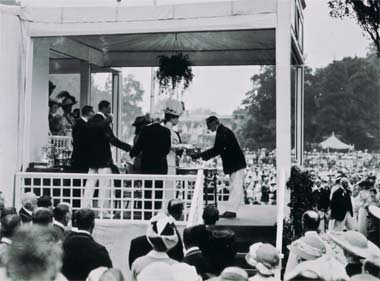 The Grand Challenge Cup being presented by the Queen

It was now on to the Olympic Games. Eight countries had entered eights: Australasia, Canada, France, Germany (two crews), Hungary, Norway, Sweden and United Kingdom (two crews-Leander and New College). The Leander crew had been strengthened while the Australians responded by replacing Heritage with Dr. Ward (Ward had never become a member of Sydney and so could not have rowed for the club at Henley). In its first heat, the "Australasians" met Sweden and had the easiest of wins, the rate dropping to 30 for much of the distance. The two German crews and the two UK crews also progressed further.

Australasia drew Leander in the semi-final and, after a splendid race, was beaten by 1/4 length. In those pre-FISA days, the crew had the misfortune to draw the side of the river which necessitated a sharp turn near the finish to avoid a swimming baths before negotiating a bridge. Leander went on to meet and beat the New College crew in the all-English final. 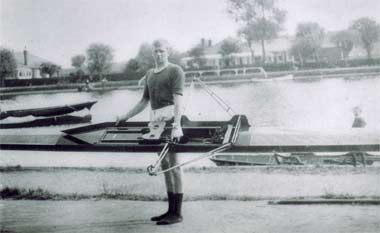 McVilly beat his German opponent in the heat, but was disqualified for interference. Kinnear of the UK won the final of the sculls while a German crew beat Thames in the only other event, the coxed fours. Attempts to arrange a further deciding race between Leander and Australia proved fruitless and the crew returned home to, of course, a great welcome. The Grand Challenge Cup itself followed some months later, and was displayed in Sydney, Melbourne and Adelaide.

On their return, many of the oarsmen ascribed their loss in the Olympics to their lane, Leander having "well over a length's advantage". According to Middleton, they could beat Leander nine times out of ten on a straight course. English rowing generally, he said, "taught us little or nothing" regarding rowing or the fitting of racing boats. The accusation was also made that Leander failed to congratulate the Australians after the Henley success.

These comments earned Middleton an English press description as "petulant and lacking in sportsmanship", while Horniman caused a stir by announcing that Middleton would be "most severely censured" for his "rude comments". A motion of disapproval before the RA was, however, later defeated. Although the Deloitte was sold to Thames Rowing Club after its Henley win, the stroke and bow seats were brought back by E. S. Marks, President of the NSW Sports Club, and were suitably mounted. The oars used at Henley were also brought back to Australia and were presented to the crew (while the flag from the Royal Barge also, mysteriously, found its way back to Australia).

A sentence in the NSWRA's annual report for 1911/12 is deserving of note: "Your Committee would like to impress upon members the honor done our men by being accepted for Henley, which stands for the very acme of amateurism, and it is indeed a question whether we do not prize the win at Henley more than we would have done a win at Stockholm".