The decade was dominated by the Great War which was to bring rowing, among so many other activities, to a virtual standstill. Before its outbreak, however, Australian oarsmen competed overseas for the first time, with a crew representing Sydney Rowing Club competing at the Henley Royal Regatta with outstanding success. For SRC, this was the highlight of a decade which otherwise saw few wins on the river for the club. 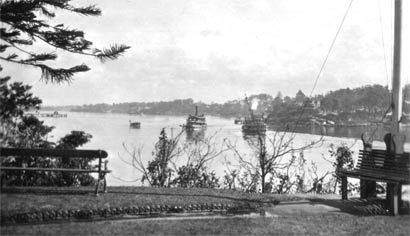 The view from the Branch pre WWI

No major improvements were made to the club's buildings during the period. Painting and minor repairs were necessary at the Woolloomooloo premises and, in 1911/12, the tennis court at the Branch was relaid and made available once again. Electric light was installed at the Branch in 1919/20. In that year, too, in connection with the club's 50th anniversary jubilee plans, a scheme for additions and improvements to the Branch premises was drawn up. The cost of the new and commodious premises was deemed prohibitive, however, and a special general meeting of members in March, 1920 agreed with the committee's views. An alternative plan to carry out improvements to a cost of £1,000 was approved but the proposals had not been finalised before the end of the year.

Little change also took place in the make-up of the fleet. A practice eight and a regulation four were bought from Mercantile in the 1910/11 season, while Miss Walker also presented a clinker four to the club. A new racing eight and a racing four and two gladstone skiffs were added in the following season. The 1912/13 report notes that "the Gladstone Skiffs prove increasingly popular, and the question of increasing this class of boat will no doubt receive the careful consideration of the incoming Committee".

In June, 1917, the fleet consisted of 28 craft, but five of these were called "older" boats and were not apparently in good order. There were three racing eights and two practice eights, three racing fours and two practice fours, nine gladstone skiffs, five pair oars, three double sculls and a four pair skiff. The fleet three years later was identical, although a sub-committee had been appointed to dispose of the old boats to the best advantage. The 1919/20 report noted that "the boats have been overhauled, and are now in good order".

Active membership in June, 1919 was only 42, but had grown to 94 by June, 1920. This increase appears to have been at least partly due to the acceptance by the club at last of manual labourers as members. (Unfortunately, no accounts are available giving the time and the circumstances of the change.) Suspension of the entrance fee as an annual ritual continued. With a large mortgage outstanding, the declining activity caused the committee grave concern. The ₤425 in debentures which fell due at the end of 1910 was redeemed by increasing the mortgage on the Branch property. To meet agreed reductions on the mortgage, however, two further issues of debentures totalling ₤300 in all were made to members during the war years. By the end of the decade, the mortgage had been reduced from the ₤1,770 it reached in 1910/11 to ₤1,000. In addition, the club had found £200 to invest in a War Loan. Debentures to the value of £128 were still outstanding in June, 1920 (the other £172 having been paid off or donated to the club by members). The issue of further debentures to finance improvements to the club's premises was foreshadowed in the 1919/20 annual report. Branch receipts were around ₤450 in the early years of the decade with a small profit on operations being shown. Surprisingly perhaps, Branch receipts were still at the same level in 1916/17. By 1919/20, with membership increasing again, receipts were up to ₤615.

The position of club president continued to be held by Deloitte. His love of foreign travel took him away from the club for quite a time however: he was farewelled at the club's annual meeting in July, 1911 and was away until the end of 1913; in 1917, he also took a trip to New Zealand. A number of additions were made to the list of vice-presidents during the decade. At the end of the period there were fifteen: Miss Eadith Walker, Sir Thomas Dibbs, Sir Samuel Hordern, Dr. Alfred Burne, and Messrs. Arthur Burdekin, Henry Braddon, William Cope, Charles Dobson, William Hanna, Ernie Keary, Ted Kennedy, Jim Oatley, Edward Simpson, Clarrie Smith and Dick Teece.

With the exception of 1917/18 and 1918/19, the State Governors held the position of patron of the club once again. In those two years, however, a "commoner" filled the post: Sir William Cullen, Chief Justice of NSW. The club's annual regatta in 1912 was attended by the patron. His Excellency Lord Chelmsford. Arthur Burdekin was club captain in 1910/11 and 1911/12 when William Hanna took over again.

Hanna resigned as captain in 1914 to go to England and Fred Meares was elected in his stead. On the latter's enlistment, Hanna accepted the position again and, by the time he retired at the end of 1917, he had been captain of SRC for a record total of over thirteen years. Arthur Shadforth succeeded him and remained captain until the end of the decade. Meares was an "energetic and popular" secretary for three years, while Arthur Cayzer had a three-year term from 1916/17 to 1918/19.

The position of treasurer again changed almost annually until Harry Pike accepted the position again in 1916/17 and saw out the decade. The position of vice-captain was vacant during the war years. Keith Corden, Charlie Ebsworth, O. H. Baass and Charlie Moesch were especially prominent in committees over the decade. Among the good members of the club passing on during the period were H. A. A. Smith, J. F. Reid, W. F. Kloster, Jack Myers, Lou Quist, Percy Pratt and L. G. J. Bennett. 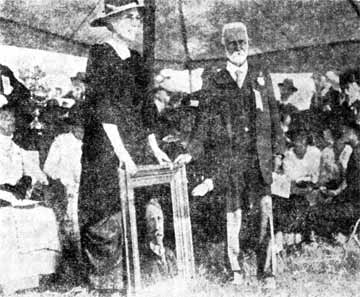 Deloitte receives his presentation portrait at the jubilee regatta

Annual balls were successfully conducted both before and after the war, but the annual dinner seems to have been discontinued. The moonlight excursion to the Branch was "resuscitated" in 1911 j 12 but adverse weather conditions ruined the evening and it was not tried again. Jubilee festivities were limited to a Jubilee Regatta on 13 March, 1920. Her Excellency Lady Munro Ferguson, wife of the Governor-General, was present and, during the afternoon, she presented Deloitte with a large framed photograph of himself, to be hung in the club rooms, as a memento of his long connection with the club. Jim Oatley, also a foundation member, was also in attendance.

Races solely for club members, other than at the annual regatta, were conducted frequently in the early years of the decade. In 1910/11, five such races took place, with Fred Meares commencing his rowing career in the fours race of July, 1910. Three more were held in 1911 / 12 and two in 1912/13. In 1915, Arthur Burdekin presented a medal for the member scoring most points in a series of winter races (the winner being A. C. Bellamy). Increasing enlistments led to even these races being abandoned.

Mercantile Rowing Club came to an end early in the decade. In July, 1910, after earlier warnings, the Sydney Harbour Trust informed the club it could not remain at Dawes Point for more than a few weeks more. A special general meeting unanimously carried a resolution put forward by the committee that, in view of the Trust's action and as no other suitable site was available in the metropolitan area, the club disband.

Mercantile's boatshed at Dawes Point just before being dismantled

Within a week, however, a meeting was held to form a rowing club in Mosman Bay and Mercantile people agreed to assist the club in every way. The new Mosman Rowing Club was soon a reality and it decided to adopt the rules, colours and flag of Mercantile and to purchase the Mercantile premises offered to it "at quite a nominal price". A final members' regatta was held at the Mercantile shed and, early in 1911, the boathouse was pulled down and re-erected in Mosman Bay.

Mosman's official opening took place on 1 April, 1911, with Albert Nash, the Association's chairman, doing the honours. The new club got away to an excellent start and performed quite creditably in regattas prior to the war, winning the Association's junior pennant in 1912/13. In 1915, one of the club's keen oarsmen, H. G. Alderson, became captain.

Another club which failed to survive the decade was Balmain Enterprise (which became generally known simply as "Enterprise" from about 1911). The club did well on the river and won the premiership in 1912/13 and 1914/15. In September, 1917, however, a cyclonic storm completely demolished its shed and crumpled its fleet beyond repair. Hopes of a recommencement after the war failed to materialise, although former Enterprise members were prominent in the formation of the new Drurnmoyne Rowing Club in 1919. 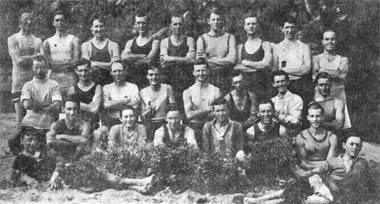 Leichhardt members at their annual picnic in 1917

Sydney University also had a disappointing decade. It had little success in either Association races or the intervarsity contests. With the competition suspended from 1915 to 1918, Melbourne won five of the six races held and Adelaide won the other. Sydney trailed the field in 1920 when Queensland University competed for the first time.

Interclub contests, restricted to certain clubs, first commenced in this decade. In 1912, Enterprise and Leichhardt held a series of races for a shield to stimulate greater interest in the sport in the winter months. Enterprise took the "Leichhardt Challenge Shield" and defended it against Glebe in 1913 and again in 1914. Leichhardt regained it in 1915 and successfully withstood a challenge from Balmain the same year. The next contest was in 1917 when Glebe took the shield off Leichhardt. Two matches between Balmain and Leichhardt took place in 1918: Leichhardt won the first but the second was a tie with each club winning two events and the result of the deciding skiff race being a dead-heat. Combined social outings were also popular. Glebe and Mosman started the trend in 1915, with Enterprise and Balmain quickly following the example. Glebe and Leichhardt were next and in 1916 Leichhardt, Balmain and Enterprise held a combined Rodd Island rendezvous.

A number of new clubs commenced in the decade, but none was to last for very long. A YMCA Boat Club commenced in 1911, a Manly Rowing and Sailing Club in 1913 and a Cronulla Rowing, Sailing and Motor Boat Club in 1914. The activities of the Cremorne Club, commenced in 1912, were to include rowing, while the Penrith Athletic Club organised rowing on the Nepean in 1913. A new venture was the Gladesville Rowing Club, formed in 1915 for junior oarsmen. George Towns seems to have been the inspiration behind the club, which proceeded to hire boats from him and use his shed.

In 1918, a similar club - the Western Suburbs Amateur Boys' Rowing Club, for those under 16 - commenced, using Peter Kemp's shed at Abbotsford as headquarters. It was probably this club which became known as Sydney Junior Rowing Club and was permitted some use of portion of the SRC shed. A new club called the Henley Rowing Club was formed in 1918, using George Towns' shed as headquarters, and soon affiliated with the RA and commenced racing.

Among other groups, races between the Railways Departments of NSW, Victoria, Queensland and Tasmania were held in 1912 and 1913, while the Leichhardt Regatta in 1920 included a race in eights between the Commonwealth Bank and the Government Savings Bank. Rowing in country districts was also, of course, affected by the war.

Regattas were held frequently in the early years of the decade, that at Coraki continuing to be of great importance. Grafton Rowing Club seems to have remained the strongest of the clubs with Lismore still quite active. A new club, the Wagga Wagga Rowing Club was formed in 1914.