Sydney Rowing Club was not the only rowing club in NSW for very long. During 1872, Newcastle Rowing Club was formed and, during the 1872/73 season, SRC sold two gigs to the newly-formed Grafton Rowing and Boating Club. A second amateur club in Sydney itself was also not long in being formed. In October, 1874, a meeting of warehousemen and merchants' clerks decided to form a club and to call it Mercantile Rowing Club. Henry Woolnough, a committee member of SRC during its first year, occupied the chair at this meeting. The club gained a good response, including the patronage of the Governor of the colony, Sir Hercules Robinson. (Since the departure of the Earl of Belmore, SRC had been without a patron.) The club secured premises at Dawes Point, on the western side of Circular Quay, and had soon erected a boatshed and held an official opening ceremony. By January, 1876, Mercantile had a large membership and a fleet of thirteen boats and was very soundly established indeed. It had also ventured into a new area by holding the first of a very successful series of annual balls. (SRC had considered holding a ball in August, 1871 but, if held, it was not continued.) Races for members were also soon being organised. Financial problems were, however, to prove worrying. Despite having 150 active and 30 honorary members in 1878, repayment of its ₤600 overdraft was found difficult and a Clasper eight, imported from England, was received in a badly damaged condition and led to an involved insurance battle. Subscriptions were raised to ease matters a little. Late in 1878, a Mr. P.B. Walker offered the club land on the Parramatta River at Putney to erect a branch shed and the matter was fully investigated. The offer was later declined, presumably due to financial considerations. 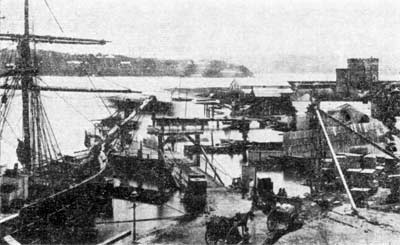 More clubs were to follow. In April, 1876, preliminary steps were taken to form a Glebe Rowing Club. They were, initially, unsuccessful but, in July, 1879, a club was officially opened. Its boathouse was erected at the foot of Ferry Street, Glebe, site of the present club. Its first president was Sir George Wigram Allen, Speaker of the NSW Legislative Assembly, while its first captain was Robert Clark, brother of Jim Clark, Sydney's captain. The two existing clubs participated in a procession of boats at the big opening - twelve boats from Sydney and nine from Mercantile - while Glebe itself produced three fours and four double sculls. There had also been proposals in 1876, albeit unsuccessful, to form a "Cosmopolitan Rowing Club" in which "the sons of toil may participate in the pleasures of their more wealthy fellow-citizens". The rowing movement spread to the schools in 1878, with Sydney Grammar deciding to establish a club of its own. In July 1879, a meeting at Milson's Point considered the desirability of establishing a further club. In November, the North Shore Rowing Club was formally opened, with crews from Sydney, Mercantile and Glebe present to bolster the opening procession. June, 1880 saw yet another meeting resolve to establish a Banks' Rowing Club and Thomas Dibbs, vice-president of Sydney, soon became president. The club appeared set fair to emulate the Victorian banks' success in maintaining a rowing club but troubles were encountered and the scheme folded. Interest in rowing was also expressed by one or two other groups. During 1879 and 1880, both the Audit Office and the Government Printing Office held several regattas while a race for Sydney Morning Herald employees was also held. 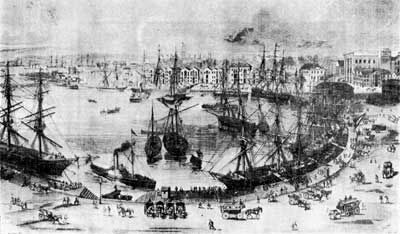 A sketch of Circular Quay, Sydney, in 1874 with the club clearly shown

Despite the, initially, limited competition, there was some more exciting racing during the decade. The club's first challenge to an intercolonial match was actually received in April, 1870, only weeks after the first meeting. Two members of Melbourne Rowing Club (formed in 1862) were planning a visit to Sydney and a series of races was suggested. At the time, this had had to be rejected as being premature, but when a second "invitation" was received - and after the success at the Balmain Regatta-it was a different story.

An intercolonial champion gig race for bona fide amateurs with a prize of £100 was planned for Hobart Town on Anniversary Day, 1872. The organisers had arranged with the Tasmanian Steam Navigation Company to carry Sydney oarsmen to the regatta at 1/3 the normal rate and to make no charge for their gig. A meeting of members enthusiatically accepted the invitation, deciding the ₤85 odd needed for the trip would be collected "without the slightest difficulty". The selectors delayed their choice of a crew until after the Balmain Regatta and finally went for Charles Deloitte (bow), Grantley Fitzhardinge, Robert Clark and Arthur Fitzhardinge (stroke) with McKay cox and John Myers emergency. A second crew of members (including Edmund Barton) also determined to make the trip but. to row separately as the "Parramatta River crew". Both crews took new gigs, built by Cuthbert's in Sydney, with them. Two crews from Hobart Town entered, as did one from Barwon Rowing Club in Victoria. The race aroused great interest throughout the colonies, and a crowd of 20,000 was present to witness the great event. The Victorian crew started hot favourites, with the River crew also favoured. The SRC crew was neglected, due perhaps to an attack of quinsey keeping Grantley Fitzhardinge out of the boat for a time. After 1 1/2 miles of the 5 mile course, however, Sydney was well in charge, and they won the race by 1/4 mile from the Parramatta River crew (in the time of 36 minutes and 20 seconds). The Victorian crew finished last. The police force had to be called on to clear a way for the champions after the race, so great was the crush around them. The Governor of the colony was present for the race and he made the presentation of the hundred sovereigns "in a white satin purse handsomely embroidered by a Tasmanian lady". Excitement ran high in Sydney as well, and a great homecoming was planned. To make it a little easier, however, the captain of the steamer carrying the crew was cabled and was asked to plan his arrival for 8 a.m., the scheduled daylight berthing being an "inconvenient hour for gentlemen to be present". Unfortunately, a misunderstanding occurred and the original schedule was adhered to with only Q.L. Deloitte and one or two others being present to provide a welcome. Amends were made in the afternoon with about 100 members gathering at the club house to accord the crew a grand reception. 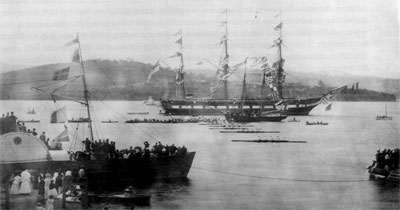 The Balmain Regatta Committee was also impressed by the excitement of the event and decided to stage a further intercolonial gig race at their 1872 regatta. The prize money was to be variable: if only NSW was represented it would be £50; for NSW and another colony £100; and for NSW and two or more colonies £130 and a second prize of £20. Victoria determined to send a crew and Sydney selected two crews: the first the champion Hobart Town crew and the second the River crew oarsmen with one change. This time Victoria did not start favourite - 10 to 1 on was the best price some backers could get about Sydney no. 1. Although there were ten other events on the programme, there was no doubt that the very large crowd was attracted by the intercolonial event.

The four-mile race commenced from Pyrmont Bridge and, by Long Nose Point, Sydney no. 1 was well in advance. At this stage, Victoria already appeared "pretty well done up"; the bowman, in particular, "was evidently touched in the wind, and laboured, and had enough of it". Sydney no. 1 won by 3 1/2 minutes from the no. 2 crew with Victoria 1 1/2 minutes back third. The time was 27 minutes 28 seconds.

The styles of the NSW and Victorian crews differed markedly. "The Victorian men have a short sharp jerky stroke, principally arm-work, and we fail to see that powerful swing of the body and fine sweeping stroke that was so telling in the Sydney rowing. "An old London Rowing Club oarsman who saw the event said he was "astonished" by the Sydney crew's rowing: "they had the Cambridge swing with the Oxford stroke. They approached perfection". Coach of the crew was James Candlish, a former English sculler who was beaten by Dick Green in 1858 in the first ever race on the Parramatta River championship course (for stakes of £400).

Further exciting racing was in store. Even before a grand celebration dinner could be held in Sydney, Victoria had challenged for a further race, this time on the Yarra in March, 1873. Acceptance was far from automatic, however, the club committee being opposed to sending a crew in view of "the rules and regulations under which the race was to be rowed". The wishes of the members carried the day and a crew was entered. Grantley Fitzhardinge, captain of the previous crews, was unable to make the trip at the last moment and John Blaxland took his place. Hobart Town came across for the race and four local clubs, Melbourne, Geelong, Ballarat City and Ballarat, also entered. Sydney started firm favourites. "No aquatic contest that has yet taken place in Australia occasioned so much excitement" said the Sydney Morning Herald and, in Sydney itself, a large crowd gathered outside the Herald's office to await the result. However, "when it did come many were incredulous, and it was not until a number of telegrams of a similar tenor were received that conviction forced itself upon them". Sydney had been beaten, gaining only third place behind Melbourne and Ballarat City, the margins being 4 lengths and 3 lengths. At a dinner that night, Arthur Fitzhardinge conceded that the Sydney crew had been overmatched on the day. However, he said, his crew comprised bona fide amateurs only, whereas the Victorian crew, under Victorian rules, included several manual labourers. And "people confined in an office had no show against men who worked with their arms, or their hands, or in the sun all day". The great debate over what should constitute an amateur had commenced.