In mid 1993, the Honeysuckle Development Corporation (HDC)11 offered the club the use of a shed adjoining a number of finger wharves near the junction of Merewether Street and Wharf Road. A six-month lease was signed on 22 July 1993. This was the first of a number of temporary sheds to be used over the next sixteen years.

The building had been a base for crews of RAAF search and rescue boats on stand-by to recover pilots having the misfortune to fall into the ocean. It had become redundant when the (so called) 'crash' boats were replaced by helicopters. Neighbours also using the finger wharves were Customs, Water Police, State Fisheries and the Maritime Services Board.

Installation of boat racks and essential modifications to the building such as removal of a wall were carried out over the following weekends with boats transferred to the shed in late August 1993. As the relatively small shed was capable of holding only a portion of the fleet, some boats, particularly the eights, had to be stored off-site. 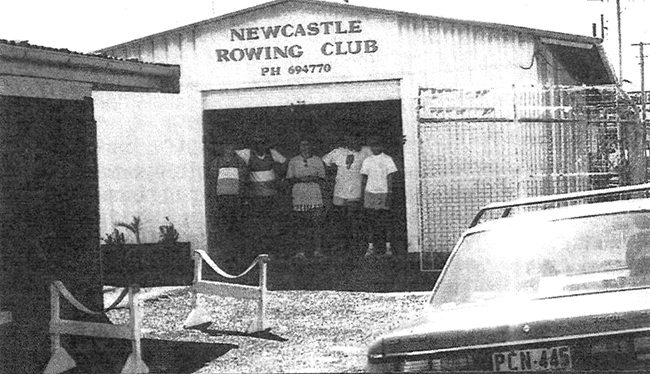 Western access door to the first boatshed. Below, an inside view.

So, we now had boats and a shed to keep them in but no direct access to the harbour. Boats still had to be delivered by trailer to Throsby Creek until a pontoon and ramp could be installed. This was rectified in early 1994 when a number of rectangular (3m x 1.8m) concrete pontoon blocks were noticed on the foreshore at Carrington where the Australia Defence Industries complex is now located. Inquiries with the Port Authority revealed that, fortuitously, not only was ownership uncertain but no one wanted them. How many did the club want? A quick guess (the pontoon was not permitted to protrude into the harbour so its length was determined by the length of the wharf). Six please. They were delivered to the club by the Port Authority the same day. 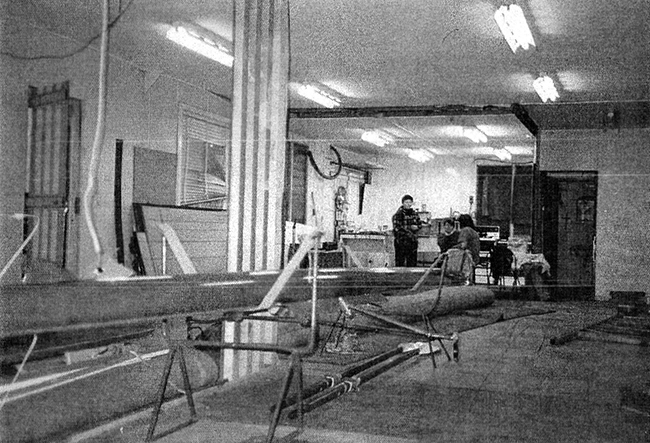 Linked end-to-end, the now 18 metres long pontoon was tethered rather loosely along one of the finger wharves near the 'new' boat shed. For some time however, without a ramp for access, launching was a daunting task. Getting a boat and crew on to the pontoon at high tide was relatively easy but at low tide access was more complex with crews having to climb down a ladder to the pontoon with the boat then passed down from the wharf above.

By July 1994, the pontoon was connected more securely to the finger wharf by a system that held it in position yet allowed it to rise and fall with the tide. Access became much easier a month later with the installation of an access ramp between the shore and the pontoon.

Such a system has some limitations such as the capacity to launch or recover only one boat at a time which tended to be a bottleneck during busy periods. Nevertheless, it was the best feasible option for launching shells from a wharf into the harbour and it did allow rowers to get in their boat with dry feet - a crucial consideration for many. The pontoon served the club well until its move away from harbour­side sheds in 2007.

In the latter years of its service, the pontoon was covered with artificial turf to protect the oars when boats were alongside. The system's benign appearance as shown in the photograph did not always apply. At low tide the middle section became so steep that keeping one's footing when carrying a boat was extremely difficult. Standing on the pontoon was almost impossible when waves from passing boats or during rough weather caused it lurch uncontrollably. 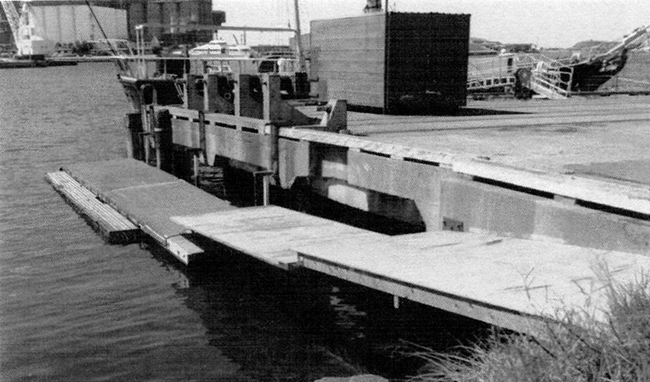 Pontoon (a later, shorter version at Throsby Wharf) and ramp used when the club was located on the harbour. The centre section has wheels on the far end and hinges on the near end allowing the pontoon to rise and fall with the tide. 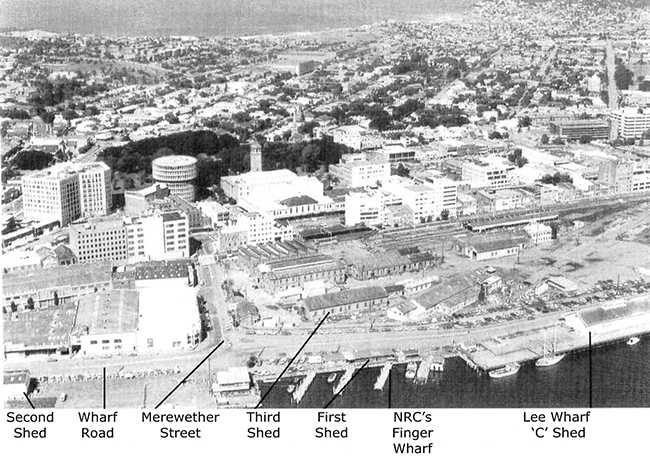 After just sixteen months the club was given notice to vacate the shed by November 1994 as it was to be removed. The news wasn't as bad as it first appeared as the HDC made available a larger building as a replacement. To raise much-needed funds, the club offered to demolish the shed being vacated plus another nearby, both of which were aluminium. Demolition was carried out on the weekend of 10/11 December 1994. Sale of the scrap metal raised a little over $1000.

The new building was a disused Urban Transit Authority shed at the Merewether Street Wharf, now the site of the Crown Plaza Hotel complex. Work to make the building suitable included cutting two holes in the western wall that were fitted with roller doors to provide boat access and construction of new boat racks. Access to an adjoining building provided separate rooms, not possible previously, for luxuries such as gym, office and kitchen. 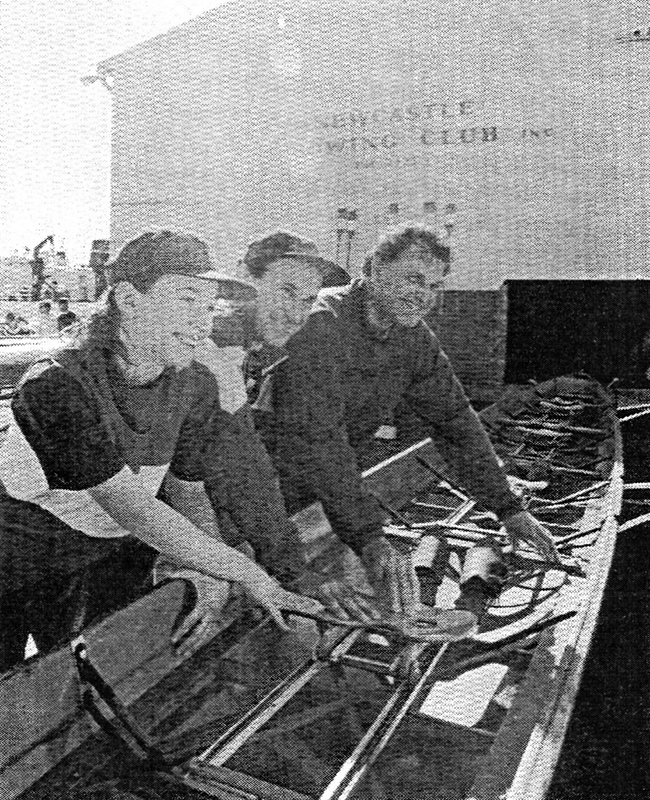 Fortunately, the new shed was only about 100 metres east of its predecessor so relocation of the pontoon was unnecessary. However the distance warranted the introduction of a trolley (see below) to carry boats backwards and forwards. With a large wheel on each and smaller ones in the centre at the front and rear, it was highly manoeuvrable and capable of carrying two quad-size boats at a time. 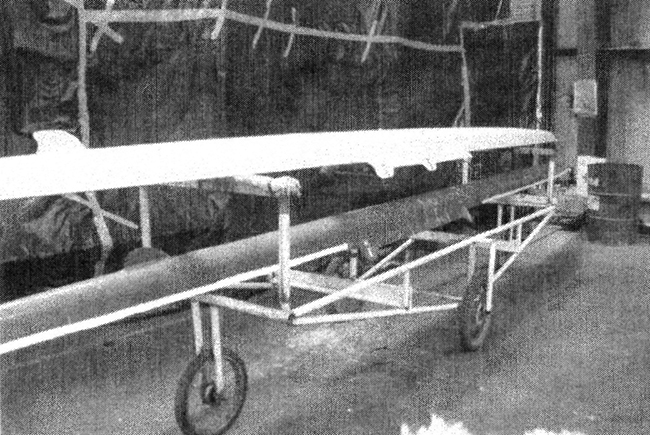 To facilitate off-water training, acquisition of gym equipment commenced with members canvassed for $50 donations towards the cost of an ergometer ('ergo' or 'erg') indoor rowing machine. By February 1995, the kitty amounted to $560 with another $200 pledged; half the required amount. In the meantime, arrangements had been made with a local gym (Howzat Fitness World in Darby Street) for members to use their equipment for $5 per session. As is often the case, moves to acquire an ergo competed with other fund raising efforts such as sponsorship of the club's regatta (at $100 per race) not to mention the ever-present drive for money for new boats and boat shed. By 2005 the club had acquired four standard and one sweep oar ergos.

The next move to another temporary site, came in November 1997 with the impending demolition of the Merewether Street buildings to make way for the Crown Plaza Hotel development. HDC continued its generous support of the club by providing a former permanent way (NSW Railways) workshop building in the Civic precinct on Wharf Road (below). 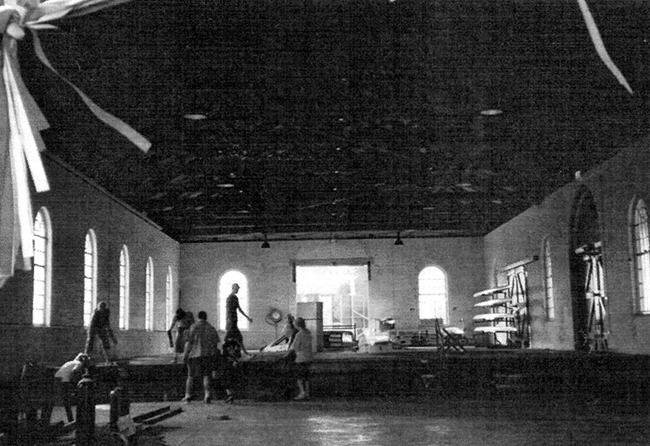 Inevitably, we had to move again. Early in 2001 the club was notified that the building used as a boat shed for a little over three years, had to be vacated by April. It was required as a construction office for the Crown Plaza complex. In its place HOC made available portion of a former cargo shed at the western end of Throsby No 1 Wharf, just east of the Newcastle Cruising Yacht Club marina at Wickham. 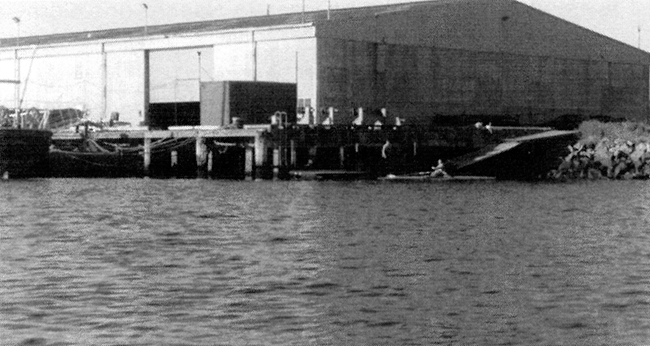 The building was shared with the William IV project, the Maritime Museum, the Military Museum, the Dragon Boat club and the odd visiting cruise liner and warship. It provided ample storage space including a kitchen and meeting room/gym. The relocation involved the dismantling and re-installation of boat racks and pontoon as well as the transfer of boats. The ubiquitous pigeons that inhabited the previous shed obviously thought they were included in the move. In any case many, including mates, turned up to continue to exasperate members with their uncanny ability to deposit dung directly from the rafters onto the boats beneath. A short commute to an endless food source - the grain silo opposite - undoubtedly contributed to their stubborn resistance to all inducements to bugger off.

By far the biggest task was the relocation, adaption and installation of the floating pontoon and building of a new access ramp. The floating pontoon was towed to the new site where it was located on the end of the wharf that was shorter that the finger wharf where it had been fixed beforehand. Consequently, the pontoon had to be reduced from six to four modules. Club members did the work in just a week thereby saving the club an estimated $15,000 - $20,000.

During its occupancy of the Throsby Wharf the club had the unusual experience for a rowing club of having to contend with the implications of modern anti-terrorism measures. It occurred when an American warship visiting Newcastle late in 2001 was moored at the wharf adjoining the shed. Security was particularly tight with members checked at the gate by guards prior to accessing the building then scrutinised suspiciously by sailors on the destroyer wearing armoured vests and carrying automatic weapons. US security experts admitted that the cargo shed where our boats were housed would be a protective barrier against missile attack from the shore side. No mention was made of threats from the other side, the potential for which was demonstrated daily by the numerous boats that passed by. The visit also introduced the practice whereby the club, as occupier of a so-called 'harbour facility', was required to confirm for security staff that there were no unknown or suspicious containers in our section of the shed prior to any visiting naval or passenger ship being moored there. These were strange times indeed.

Just three days after the final regatta for the 2006-07 season and with construction of a new boatshed seemingly only months away, a bombshell struck. HDC advised the club and other occupiers of the Throsby Wharf shed that access was prohibited indefinitely due to a combination of severe storm damage and deterioration of the asbestos roof. Every item stored there had to be professionally de­contaminated before it could be returned to its respective owner. Naturally, no rowing was possible pending release of the club's boats.

An urgent search to find alternative accommodation identified only one possibility. The Regional Land Management Corporation12 responsible for rehabilitation of the former BHP steelworks site kindly offered the use of a portion of a disused bike shed for the boats (see below) and a large alcove in the former administration building (background building in the photograph below) for the trailer. The offer was gratefully accepted. Following decontamination, boats were relocated to the new storage area in July.

Rowing resumed as soon as possible to maintain club activity. Initially this involved boats being transported to Throsby Creek by trailer for two 1 1/2 hour sessions each Saturday morning. Boats utilised were two, quads, two doubles and three singles, a total of only fifteen seats. Boats were swapped on the trailer as necessary to meet the training needs of any crew preparing for a regatta. Shortly afterwards a Wednesday morning then a Friday morning session were added. Tuesday rowing was included for a short period in November 2008.

Apart from that drastic reduction in general rowing activity, other fallout from the relocation included cessation of both schools rowing and introductory classes. Worst of all, competitive rowing was almost impossible due to the lack of suitable training opportunities and limited boat availability.

Fifth Boatshed. 2007 - 2009 (Sadly, the building in the background is not available to be relocated to the shores of Throsby Creek as a club house)

An encouraging aspect was the large number of members who demonstrated both loyalty and an enormous faith in the future of the club by renewing their membership despite having to suffer the above constraints for an indefinite period. Evidence of the underlying strength of the club was amply demonstrated in 2008 when the club successfully ran its annual regatta despite seemingly overwhelming d ifficu I ties.

Later in the year the pontoon and ramp, now superfluous and a safety hazard, were removed, the latter by club members. By then the pontoon was in a seriously deteriorated condition after thirteen years of valuable service. Had we remained in the shed for any time the pontoon would have had to be replaced at a cost that doesn't bear thinking about. The Throsby Wharf shed was demolished in early 2008.

11. Honeysuckle Development Corporation (HDC) was established by the NSW Government in 1992 with responsibility for re-developing disused land and building adjacent to Newcastle Harbour and Throsby Creek.

Next > Appendix A - Boats