Rowing - the noblest, manliest and approaching to the scientific, of any games, or sport, or play, in any nations, clime or country.

Robert B Johnson
A History of Rowing in America, 1871

European discovery of Newcastle was by rowers. Then, for upwards of a hundred years following Newcastle's first settlement, its people relied upon boats and those who propelled them for their transport needs. With such a background, it can surprise nobody that Novocastrians enthusiastically adopted rowing in its various other forms: competition, recreation and pleasure.

Newcastle Rowing Club (NRC) has, over a long period, played a prominent part in making rowing available to the people of Newcastle. It was a vigorous club during the last few decades of the 19th century. These were key formative years of Australian rowing that have since been fondly referred to as the "golden age of Australian rowing" due to a succession of Australian world champion scullers. Major developments during the period were the formation of the nation's earliest rowing clubs, state amateur rowing associations were established and the most significant advances in racing boat construction occurred. And who could ever forget those tumultuous years of the amateur-professional debate?

Although NRC was one of the earliest rowing clubs to be created in NSW, it was to suffer several lengthy periods of inactivity. Formed for the first time in 1870, it enjoyed several successful years before folding in 1874. Subsequent active eras were 1880 - 1896 and 1940 - 41. The current era began in 1992. Unsuccessful attempts to resurrect the club were made in 1878 and 1909.

It would be impossible for readers to appreciate the story of the early years without some understanding of Newcastle in the 19th century. In addition, there was a strong rowing environment already existing within which the club had to find its place and co-exist. Both the town and rowing itself are very different now.

To understand the setting, one has to suspend the image of Newcastle as it is now. In 1835, only a few decades before the club's formation, it had been described as a little village at the mouth of the Hunter. In 1870, with a population of only about 18,000 (up to about 25,000 by 1880), Newcastle was a relatively small town situated on the harbour separated by tracts of bushland from a number of newly established villages. Some such as Lambton, Wallsend and Hamilton were established around a coal pit. Today these are inner city suburbs. Adamstown in 1870 was completely isolated to the extent that, on occasion, residents reportedly became lost in surrounding bushland. The area between King Edward Park and Merewether was covered with ti-tree scrub. Gradually, the town expanded, based largely on the expansion of mining and export of coal. 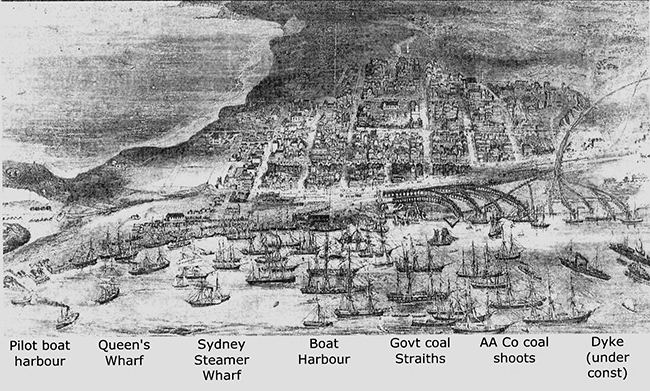 A drawing depicting Newcastle in 1874

Within the town itself the East End was called, for good reason, The Sandhills, with wind-blown sand a constant nuisance. Stormwater drainage was non-existent and there were few gutters. Local streets were appalling. A sealed road was rare, most consisting of unformed sand and rock to the extent that wagons often became bogged in Hunter Street. The first asphalt path was laid in 1877.

Prior to the introduction of gas lighting in 1869 there was no street lighting apart from outside hotels where, by law, an oil lamp had to hang over the entrance. It may not, in fact, have been as dark as it sounds. There were so many pubs in the city it was probably so well lit that it was visible from outer space. Till closing time anyway.

Smoky, smelly oil lamps were replaced gradually by gas lighting as distribution mains were expanded throughout the town. 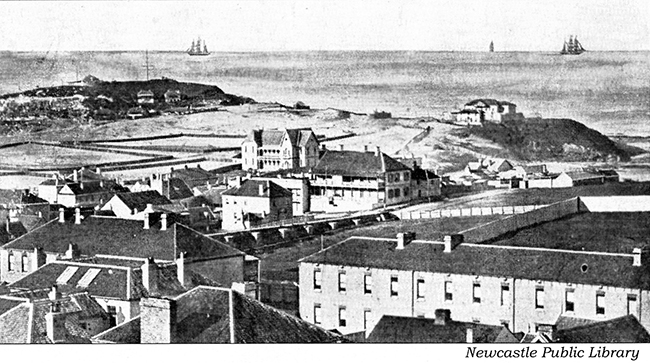 With no reticulated water supply the population relied on rainwater tanks and wells. The latter were not only unreliable but were soon inadequate due to the growing population. In 1875 there were only two public wells in the town. Houses were so close together they tended to be airless. Small back yards with an unsanitary combination of an adjoining well and cesspit caused much illness and many deaths. There was no organised collection of home refuse. Inadequate sewage disposal together with the ever-present horse dung meant the atmosphere was permanently pervaded by obnoxious smells. A reticulated system with water delivered from the Hunter River at Maitland only became available 1886. Sewerage and stormwater drainage system came years later. Whilst the above would suggest a bleak, unattractive place it was typical of towns throughout Australia at that stage in the nation's development.

During these early years the numerous small boats that plied the harbour and rivers transporting goods and people were faster and more comfortable than horse-drawn vehicles on poor roads. Until the Newcastle - Sydney railway was completed in 1889 travel between the two cities was primarily by steam-boat. Bridges were few and far between adding to the time and difficulties of road travel. Until the arrival of the motor car in 1905, transport on land was by horse or various forms of horse-drawn conveyances - hansom cabs, coaches, double-decker buses, sulkies, gigs, carts and wagons. Public transport included steam trams (from 1887) and the railway. 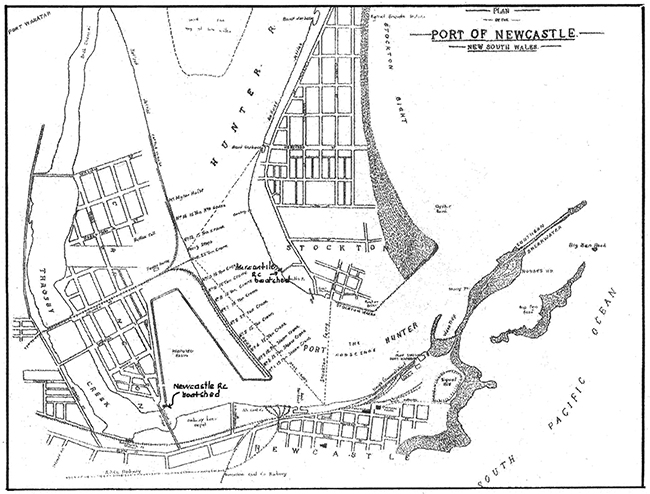 Newcastle Harbour in the mid-1890s 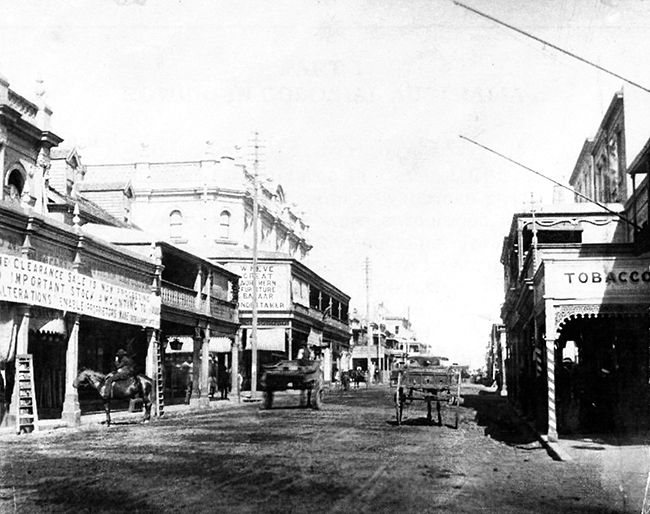 What follows is the story of the club; its foundation, activities, ebbs, flows and competitive record. A special attempt has been made to identify many of the people who have rowed with, or contributed to, the club in some way. In the absence of any surviving club records or first hand accounts of the club's activities throughout most of the first three eras this story is, of necessity, based solely on contemporaneous newspaper reports. Even if the competitive record is modest, no one can doubt the club's persistence. This was also an attribute exhibited by champion Novocastrian rowers of the past.

The first section of this story covers the way rowing competition was conducted in Newcastle, and by extension throughout NSW, from the earliest days until the 20th century.

Next < Rowing in Colonial Australia