The centennial history of the Club, Mercantile - A Century of Rowing, was written and published in 1980. With the permission of Mercantile Rowing Club and the remaining members of the editorial committee, this history has been reproduced on this site. 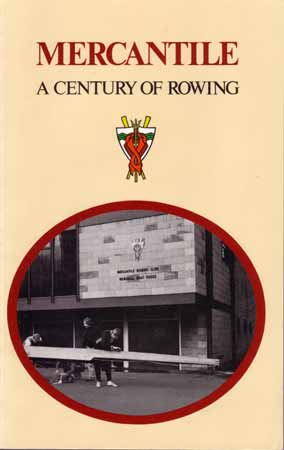 The Editorial Committee for Mercantile - A Century of Rowing was as follows:

The next 25 years has been written by an editorial committee comprising:

The Editorial Committee hopes that you will find this history of Mercantile Rowing Club of interest.

The preface to Mercantile - A Century of Rowing published in 1980 was as follows:

This history of the Mercantile Rowing Club, prepared for publication on the occasion of the Club's centenary is, as the name implies a record of the founding of the Club and of its activities both on and off the water for the first hundred years of its existence. No attempt has been made to cover in full the broad spectrum of the sport of rowing in Victoria or Australia or at an international level except to the extent that events beyond the immediate confines of Mercantile affected the policies of the Club and the lives of its members within the Club. The early history of rowing in Victoria is already well documented in John Lang's wonderfully detailed publication "The Victorian Oarsman" and to repeat such material here would only be superfluous.

What we have attempted to do, primarily for the edification and interest of members of the Club past, present and future, is to record as faithfully as we have been able the origin of the Club and its progress through the years, its successes and failures, its periods of progress and those years when progress was less apparent, and a little of the people who helped to mould the Club and make it what it now is. We have endeavoured to set the scene, both geographically and socially, in which the founders resolved to form the Club - their motivation and its realization. Some further reference has been made to national and international affairs when they had a significant effect on the activities within the Club. If some readers may find the history to be too much a factual record of the Club's life then we can only say that that is what it is primarily intended to be.

A number of members have contributed to the writing of this book and to the research behind it. If variations of literary talent or lack of it are apparent to the reader we apologise for them. We were greatly assisted in our research by notes and material prepared over the years by the late Alex Sloan and Albert Lindblade, and by Deane Morgan, which assisted in overcoming the limitations imposed by the loss of most of the Club's early records in the fire of 1927. We are indebted to many members who have come forward with photographs and information from earlier years and in particular to Mr. Philip Kenny, son of the late Ted Kenny for certain of his father's paper including in particular the copy of the original petition by Dr. Disher in relation to the King's Cup. We received valuable editorial guidance from Mr. Jim Main and others connected with "The Australian" and unstinted help from John Gumley in preparing the photographs as finally required for printing. We acknowledge also with gratitude the patience and co-operation of our printer Vaughan Printing in finally getting this volume to its readers.