August 2004, another Olympics, and a huge crowd gathered once more at Mercantile to cheer on all the Aussie crews but especially the Men's pair in Athens. A perfect day on the Yarra bank just as it was in Athens with a brilliant win for James Tomkins and Drew Ginn A third Gold medal for Tomkins and a second for Ginn. After the heartache of Sydney what better result for these two champions. Vice President Jeff Lawrence had purchase a controlling interest in Sykes Racing and the use of one of his boats made it a great club affair. 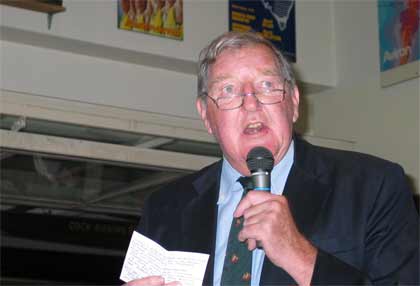 Garth Manton provides a stiring farewell to our Olympians

Tomkins who first rowed for the club in 1983 has become Australia's most decorated oarsman winning an incredible fourteen Kings Cups, a World Championship Gold medal in every sweep oared event possible and one Bronze and three Olympic Gold's. This incredible career apparently is not finished yet as he announced post Olympics that with Ginn he plans to go on to Beijing

Michael McKay, who like Tomkins also competed at his fifth Olympics rowed in the Men's Eight which claimed the Bronze Medal retired after a magnificent career also with 14 Kings Cup victories, three World Championship and two Olympic Gold medals, a silver and a bronze medal.

David Crawshay rowed in the Olympic Quad Scull, while Robyn Selby Smith achieved selection in the Women's coxless four at the World Championships.

To add to the fleet a new Men's eight was acquired from Sykes and christened "Andrew Guerin" to mark Andrew's retirement as President of the Club in June 2004. This became the second "Andrew Guerin" Eight. Once again Messrs Colgan, Guerin and Lawrence added their financial support to assist in this purchase

A new Club captain in Bill Tait welcomed the 2004/5 season and the challenge of building the club again for another Olympiad was underway. The women's program was again very strong with many of the women keen to get over their disappointment of missing Australian selection for Athens and captain Tait was keen to ensure coaching in this program was given a high priority. By seasons end and with renewed enthusiasm and much hard work the clubs women would be well on the way to Beijing. Pauline Frasca, Robyn Selby Smith Fleur Chew were selected in Australian crews and captain Tait named as Australian Women's Eight coach. 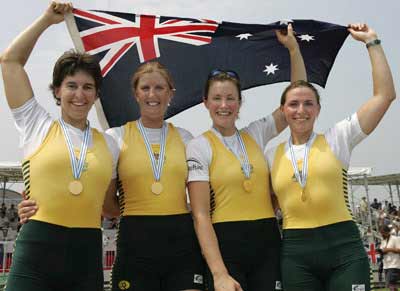 Crawshay was again selected in the Men's team after becoming the first Mercantilian to win the national single sculls championship. This year he would represent Australia as the Single Sculler while Chris Riddell was selected in the under 23 men's eight.

Sadly more great members were to leave us. Robert "Bob" Aitken passed away in December. Any reader of the clubs history will find very few pages since his arrival at the Club in 1948 where Robert Aitken did not make some contribution to our club or our sport whether at club, national or international level. First and foremost though Bob was a Mercantilian and he was never happier than at club level where he taught many generations of Mercantilians the joys of rowing, coaching, club administration and most of all club life. He valued the lifelong friendships gained from rowing and will be sorely missed. 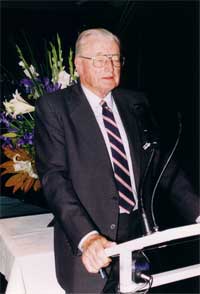 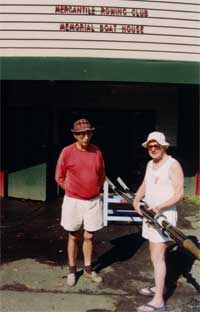 Another member to pass away was Alec Dobbie. The Dobbie family name has been synonymous with Mercantile for almost the entire 125 years of its history and Alec' first association with Mercantile began over 80 years ago as an 8 year old coxswain. Almost every Sunday he could be found at Mercantile enjoying a pleasant Sunday morning row, a passion he had maintained come hail rain or shine since his return from war service in 1945. Other long serving members to leave us were John "Thumbscrew" Carr and John Hill

In the annual Cayzer Cup — Mercantile vs. Sydney Rowing club regatta, Mercantile again took the points to record the fourth straight year of victory over our northern brothers.

To cap off a successful year both on and off the water Mercantile was awarded elite club status by Rowing Australia. One of only five bodies enjoying this status and the only non university club in this group, Mercantile is obliged to meet Rowing Australia criteria of consistent performance, ensure compliance with the national program and to employ a professional coach. With this status comes accountability and responsibility for delivering high performance programs to the clubs athletes but importantly it also brings funding. Funding that will be much needed in preparing our athletes in the demanding elite level years ahead.

Mercantile finished the fifth quarter century with our fleet comprising 7 racing Eights, 10 Fours, 13 Pairs and 9 Club sculls. Also somehow fitting into the Clubhouse were 27 Private sculls, 20 Kayaks, and the fleets of our tenants Brighton Grammar School and Firbank Girls School. This is also not counting what is in the "rafters"

Club income reached $289,996 for the year and the Endowment fund held a balance in shares at market value and cash of nearly $400,000. That goal of $1 million is getting much closer

Membership numbered 343, down a little from the earlier years of this the new century and perhaps a reflection on both the changes to membership initiated the prior year and the cleanup of the membership register. However the "once a member always a member" attitude was the key message of the club and the genuine enjoyment and benefit of membership of Mercantile was to remain the privilege of all those members.