Tomkins & Ginn made their returns to international competition with a brilliant win in the World Cup regatta at Lucerne but at the subsequent World Championships held in Seville, a race in which they broke the old world record they could only manage to finish fourth behind Great Britain, Croatia and South Africa. As history shows, with the exception of the Bronze in Sydney due to that unfortunate injury of Ginn, Tomkins achievements on the World Stage are either Gold Medals or bust, but despite the result both athletes knew that from Seville on, the path to Olympic glory two years hence in Athens was going to be an incredible journey.

Also selected in Australian crews were Travis Johnstone and Rob Douglas while Sara Richards and Danni Ackland were selected to represent Australia in the Women's four which was to win Gold at the World Under 23 Regatta.

The Club performed well on the domestic scene, particularly at the State and National Championships which were our key objectives. The Mercantile Men's senior eight led by Tomkins and Ginn won a very tight race after a boat stopping crab at the 1000m at the State Championships held on Lake Wendouree, and was subsequently named the Rowing Victoria Crew of the Year. 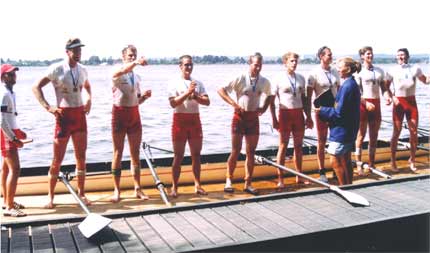 At the National Championships the Club was one of the best performed Clubs, particularly in women's events. The Club won ten medals with Sara Richards the standout athlete winning the U23 single scull, and then teaming with Fleur Chew and Emily Wilmoth to win both the four and quad scull titles. In her break through season, Alison Withers was also very successful winning both the U23 lightweight single scull and double sculls by very large margins. From a Club perspective a major highlight was an all Mercantile women's eight finishing a close second behind a virtual Australian eight and an all Mercantile men's quad scull which also medalled. 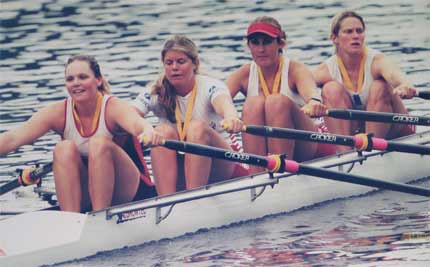 Meanwhile at Cambridge University, Kris Coventry had made selection in the 4 seat of the Blue Boat at his first attempt, however in one of the closest races in the Boat Race's history, Oxford just hung on to win by one foot after Cambridge came from a long way back.

The administration was again led by Andrew Guerin as President, David Colvin as Captain, Bill Webster as Secretary and Paul Somerville who took over as Treasurer. David Colvin took a year off work to undertake his Captaincy and coaching duties in a manner in which he would be comfortable achieving.

On the Melbourne front, the City Council undertook much needed landscaping and drainage works in front of the Princes Bridge clubs, unfortunately the long delays in work effectively curtailing all social functions and catering activities at the Clubhouse during that year. Not only did the club lose vital income during these works but also the Mercantile "Hanging Tree" — the start and finish point of many club races and all car parking in front of the clubs was effectively ended. If the long river closures and traffic problems during the Citilink tunnel works had not rung the death knell for the Barrel these drainage works and the resultant permit parking zones almost certainly did.

To top that off the clubs long standing sponsor Carlton and United Breweries announced that their twenty two year sponsorship of the club was to come to an end in June 2003. One of the longest and most successful of partnerships Mercantile will always be indebted to the great support of CUB.

On perhaps one bright side for the administration, the final repayment was made to the Club's bankers for the loan taken out in 1994 to finance the building works and once again the club was effectively debt free — once again coincidentally at a time when new works were under consideration. However the financial stress of employing two coaches and the activity they created, caused financial stress. This was not assisted by the loss of hall hire income during the Council road works and the loss of other income as it was too difficult for members to attend the club house. The finances were managed in the usual Mercantile manner, very close to the wind. 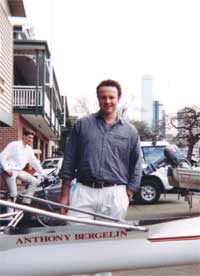 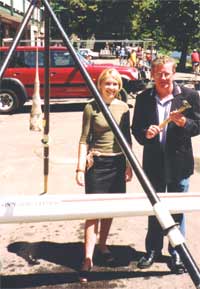 The boat namings of the Anthony Bergelin and the John Leeming

The club obtained a new Sykes coxless four christened "Simon Morrison" and in "arrangements" made with boat manufacturers Ausrowtec, Johnson and Ted Hale acquired no less than seven single sculls for club use. These seven boats were christened in turn "Alec Dobbie", "Paul McGann", "Matt Lovell", "Andrew McNeil", "Tom Courtney", "John Leeming" and "Paul Somerville", which in large part acknowledged the significant Contribution being made by the Club's volunteer coaches. Sculling was to become quite a feature of the Clubs program.