The previous four years saw the rise of the professional coach and in the decade prior to that saw the rise of the State Sports Institutes. The ability for an independant Club to remain at the elite end of the sport was severely under threst without external funding. Only a few clubs, most of whom were university funded Clubs, were able to survive at that level. Mercantile stood out as the only independent Club to do so.

Even sports institutes could not manage to cover the full range of rowing categories from sculling to sweep, men and women and open to lightweight. The Victorian Institute of Sport was probably the poorest of all the State Institutes and relied heavily upon the Clubs to coach and boat its scholarship holders. For example, the growth of the women's programme in Victoria was entirely club based and Mercantile was in the forefront of this development. Mercantile received little support from its local Institute and can take a lot of the credit for the rise of women's rowing in Victoria and the success overseas.

However Mercantile benefits from the Sports Institutes in the form of the sale of their equipment. The AIS in particular keeps equipment for only two years before selling thus making available excellent equipment at affordable prices. Nearly all of our equipment was second hand.

One of the positive trends in Victoria was that rowing clubs actively serviced school clubs creating income for the Clubs and support for the sport. In the same way that Mercantile focussed on the elite end of the sport, other clubs focussed on other areas such as masters rowing or novice rowing with great effect. Clubs created new rowing events, corporate rowing and learn to row campaigns. These supported the sport well as well as provide much needed funds for the clubs. The sport was far healthier for the changes.

It must be noted that the women's programme was established and grown by our Head Coach Tom Courtney who recruited and developed this strong squad. He must also take his share of the credit for this fine result. 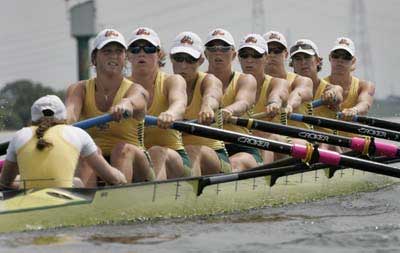 One of the other trends to appear in this period was the strong support of the parents of our active members. This was not only through attendance at Club functions, but also as the providers of a nourishing breakfast for rowers on Saturday mornings. Their involvement in Club affairs was of great benefit to the Club and rowers.

Further the Club atmosphere is lively and enjoyable. Both the old and the young rowers have a clear focus on success. The diversity of age, gender and background creates great social cohesion and the perception of a family of members has grown. 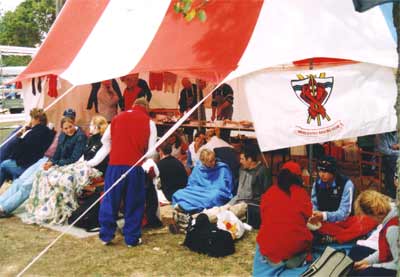 A typical regatta scene under the Mercantile tent

The loss of many great members during this period almost resulted in the a whole generation of our revered oldest generation.

Norm Cairnes passed away after 73 years as a member of the Club. His enormous contribution to the Club and our sport is one that will be hard to match.

Henry Guinn whose association with the club went back one year shy of eighty years and who was within months of one hundredth birthday, also passed away.

The loss of Bill Unwin, John Seammen, John Hill, Graham Richardson, John Carr and Alex Dobbie was significant not only in their great number but also because they represented life long great supporters of the Club. None of them stood for high office within the Club nor were they elite athletes of the Club, but they were strongest of members.

Past President Robert Aitken also died after a full and active rowing life to the end. He was not only a leader within the Club, but within the sport being a past President of both the Victorian and Australian rowing associations. He was a great athlete, coach, selector and administrator who led significant change in the sport.

A renewal of the senior members of the Club also took place during this period with Phil Batters, David Pincus and Bill White being elected Vice-Presidents. Also a changing of the guard took place in the club trust funds with Jeff Lawrence joining David Boykett and Andrew Guerin as trustees of the Endowment Fund and David Colvin joining as a trustee of the Cooper Fund following the death of Robert Aitken and the retirement of Hubert Frederico.

Special note should be made of Bill Webster who became the Club's longest serving secretary with 13 years service and rising. Webster had easily eclipsed the record of the late Walter Joseph who had been secretary for 10 years and Bill continues to undertake this role at the time of writing this history in 2005. He was rewarded with a life membership along with retiring Captain David Colvin in 2004.