And so the Club, in a strong position, headed into the final season prior to the Atlanta Games. To many of our athletes "let the games begin" could not come quickly enough.

However, events nationally and internationally had thrown a dark pall over the national rowing programme. Simon Gillett stepped down and was replaced by Reinhold Batschi as National Head Coach.

The 1995 World Championship results were ordinary. Five crews had to qualify through the Lucerne regatta in 1996 just prior to the Games, the Australian Rowing Council was in financial difficulty, a new head coach and new selectors were appointed and the Australian Sports Commission and the Australian Olympic Committee had taken over the elite programme.

The results in Finland were to be disappointing. In their first major international championship since the Barcelona Olympics, the oarsome foursome were relegated to fifth place and were not in the hunt. However, two gold medals, a silver and a bronze were an improvement upon the results a year earlier.

In what was one of the biggest upheavals in our sport, the elite aspects of the Australian Rowing Council were taken over by an interim high performance committee comprising a representative of the Australian Sports Commission, John Boultbee, a representative of the Australian Olympic Committee club member Doug Donoghue and Matt Draper as high performance manager. The change, due to the impact of large expenditure overruns, had placed the sport on a very unsure financial footing. This bold and difficult move was the catalyst for the success enjoyed by the Olympic rowing team.

Nonetheless, the Club continued to prepare its athletes for the forthcoming season. Richard Wraith assumed the Captaincy from Simon Morrison while David Boykett continued as President.

However the Club was not without its troubles. Despite success at the elite level, and a commitment to non-elite programmes, the membership was declining. Only a few short years before Mercantile was the largest club in Victoria, however now we trailed both Essendon and Nagambie (the latter due in no small way to the advent of Poker Machines in Victoria, something that Mercantile eschewed).

This decline in membership came at a time when school rowing, particularly girls schools, booms. The dichotomy of a growing recruiting base, but a decreasing number of recruits is something that all in rowing are battling to overcome. The competing demands and other forms of entertainment being encountered by the younger athletes is having a significant impact on the renewal of the club's athlete base, and must be confronted.

Masters, veteran and social rowing remains strong — more and more the backbone of the club, however only glimpses of the renewal of our athletic base are seen.

Following on from their selection for the World Junior Championships, Rob Douglas, Bill Tait and Simon Gadsden were selected to row in the coxless four that will race at the Nations Cup (unofficial World Under 23 championships). 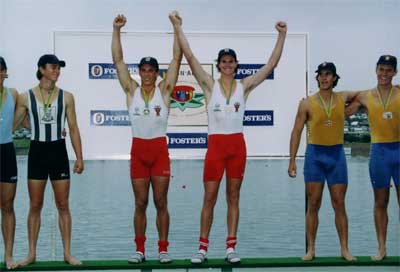 And for the Olympics — the oarsome foursome have completed their successful comeback with selection for Atlanta, Gina Douglas in the women's eight and Ben Dodwell and Peter Murphy in the Men's Eight. 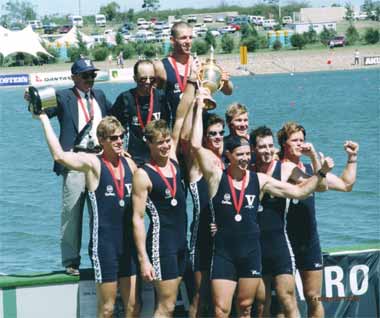 On the domestic front, the competition is limited due to the ongoing effect of National selection duties. The club still can claim the Junior premiership and strong results in the Champion Club and Senior premierships.

Despite the diminishing membership, the club was still renewing in other areas. A new "Ausrowtec" coxless four was added to the fleet and used by the successful Under 23 Coxless Four. And once again, Trader Al's generosity is seen in the donation of yet another set of carbon fibre oars.

Another "change" to our fleet is the addition of crews from Firbank Grammar — using four racks in the eastern bay as they grow their participation in the sport. Given the severe pressure on its own equipment, the club is appreciative of the use of these boats during the off-season.

The clubhouse also receives its finishing touches, with a fully fitted out commercial kitchen to cater for all types of functions. And in a move to respect the clubs 115 years of history, old photos of the club have been painstakingly renovated and now cover all walls of the building.

While the costs of the building works have been extensive it is pleasing to note that revenue continues to increase and borrowings for the refurbishment works are repaid ahead of schedule.

At the conclusion of the 1995-96 season the new VRA CEO, Jane Allen had a special VRA function where the Yarra Buoy Laying sub-Committee was retired along with the closing of the river for the Melbourne City Link Tunnels construction. VRA President, Hon. H R (Freddy) Frederico presented Service Awards to Graham Richardson, Jim Harvey (Convenor), Garth Manton and Bill Unwin. The original team in 1963 was Tom Rodda (Convenor), Norm Cairnes, Bill Bradshaw and Jim Harvey with the others joining later. Apart from Don Edwards (Melbourne R C) who did a three year stint and Mark Brown (Yarra Yarra) who drove the motor boat for a few years this was a Mercantile contribution the Victorian and Australian rowing. Freddy told the meeting that these people had unselfishly buoyed the River Yarra and maintained the equipment for every regatta from 1963 to 1996.

And so to the the Atlanta Games. These Games were the most successful of any Games at which Australia had competed. Australia was the top ranked nation at this regatta. Also, with the good performances of our juniors at their regatta at Strathclyde UK, Australia was the top ranked nation in 1996. This was the best ever performance of an Australian team. Two Gold Medals, one to our own oarsome foursome, saw Mercantilian's Michael McKay, and James Tomkins secure their second Olympic Gold Medal, and Drew Ginn his first, along with Nick Green from MUBC.

The race of the four, from the outside lane due to their placing in the semi-final, remains burned in the memory of all who saw it. Set-up in the first thousand metres, the move was made at the 1250 metre mark and the crew managed to hang on over the last 250 metres to secure their win.

In an atmosphere that could only be described as more electric than that day in 1992, members joined together to watch and celebrate another Mercantile international victory.

We could only hope that this would be the catalyst for Mercantile, and Australia's, assault on our home games in Sydney in four years time.