The 1994/1995 season saw the completion of the major refurbishment to the clubhouse. The renovated premises represented a sound investment and belief in the future of the club. The result is a credit to the work done by many to ensure a first class result, most particularly the rebuilding sub-committee of Jeff Lawrence, Andrew Evans and Warwick Hutchins.

Modelled on the famous "Boat House Row" in Philadelphia, the traditional design, including a clerestory ceiling highlighting the interior at the front of the building. The tender for the works was won by club member and former Australian lightweight oarsman, Malcolm Robertson, and were completed over the period April — August 1994. Later Jeffries Parade was to be renamed Boathouse Row following a sustained campaign by Hubert Frederico. 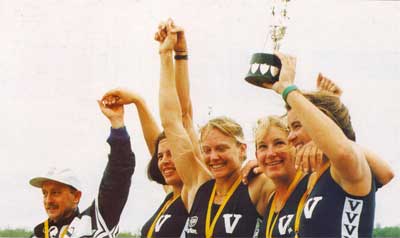 Gina Douglas holding the trophy and coached by Noel Donaldson

Following the decision in the previous year to move towards a more professional administration, the club appointed Rob Manning as Club Administrator, to ensure that the club maintained its position of preeminence in Australian Rowing and a high level of service to members.

As the club moved into the last seasons before the Olympics in Atlanta, two recurring issues continued to foment. Firstly, it was becoming increasingly difficult to recruit coaches against the increasing remuneration being provided by school rowing programmes. The era of the professional and semi-professional coach was having an impact on the development of Mercantile's younger athletes into international competition.

The balance between elite and non-elite programmes was also continuing to be difficult to meet. The club's focus has always been at the elite level, but the majority, and backbone, of the membership is non-elite. Much work is being done to ensure that this part of the membership base is not neglected.

The disappointment and completion of the 1994 International Regattas brought a new year round training programme designed to follow the European season, and major on water selection criteria based around 5000 metre time trials. Once again, the balance between the elite and non elite programmes was being shifted. Elite athletes had little opportunity to race over 2000 metres, and were little seen at domestic regattas.

The clubs wins for the season commenced at the Dimboola Regatta and continued throughout the season, culminating in the senior men's, lightweight men's premierships and third place in the men's club championship. Given the absence of many of the club's best oarsmen and women at national selection duty, the results for the season were hard earned.

The Club's 115th Annual report quite succinctly touches upon the conflict between the elite and non-elite programmes in saying:

"As the world shrinks every day, so does the distinction between Mercantile "the club" and the hierarchies of modern rowing. Often to protect our identity and assets we gave induced conflict between ourselves the VIS, VRA and the ARC. Whilst I believe that this is unavoidable in defending balanced debate....

In a recent radio interview, Mr. Frank Pyke, as head of the VIS, defended his institute's sole purpose in promoting elite athletes, but also warned against any erosion of club values and traditions. In support of this, Mercantile is promoting an express desire to "recycle" athletes, successful or otherwise, into continuing supporters of Mercantile and Victorian Rowing. The current committee....is united behind our Captain and President in pursuing the benefits derived from club values and traditions".

Mercantile continued its strong presence in the Australian Team to contest the world championships in Finland. James Tomkins, Mike McKay and Andrew Cooper, again coached by Noel Donaldson were selected in the men's coxless four, Drew Ginn, Ben Dodwell and Brett Hayman (cox) in the Men's eight, Fleur Spriggs in the Women's Quad Scull, Derek Mollison in the Men's Lightweight Four, Gina Douglas in the Women's eight and Peter Murphy (with his 7th selection in a row) and David Colvin (cox) in the coxed four.

In addition to the twelve Mercantilians in the Senior team, the Mercantile coxless four of Nigel Sullivan, Simon Gadsden, Bill Tait, Tom Hodgson and Peter Somerville (coach) were selected to compete at the World Junior Championships in Poland. This selection harks back to ten years earlier when Mercantile produced successful Junior crews under both Mike Manly and Phil Ainsworth.

Along with our strong National representation, Mercantile again provide the core of the Kings Cup crew, with no less than 6 members, plus cox and coach. This became Victoria's 10th win in a row.

The 1994/1995 season saw a consolidation of the boat fleet. While no new boats were purchased (following the major acquisitions in the previous season) the fleet was refurbished where required, and after some year's absence, the Cambridge blue trim was added in the form of a blue strip along the tips.

On the social front, the appointment of a paid administrator put more resources into the fundraising arms of the club. Thursday night's at the South West corner regained some of their numbers, while the Annual Dinner also returned to the calendar. Along with the successful President's lunches, long standing members Barry Gross and David Yunghanns continued the successful "Barrels Bash" functions, raising over $3,000 for the club at a very successful Sunday afternoon function. 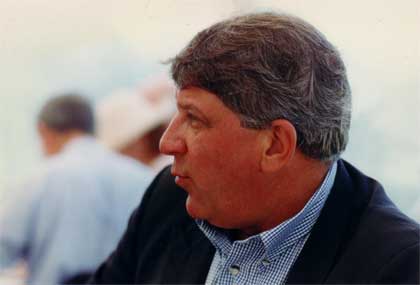 The refurbishment works at the boatsheds had left the club with a significant debt, however it also gave the club access to a much greater revenue stream. On an increasing number of occasions the clubhouse was being hired by external parties for their functions, a reflection on the new amenity of the premises and the unique location we have been fortunate to enjoy for over 120 years.